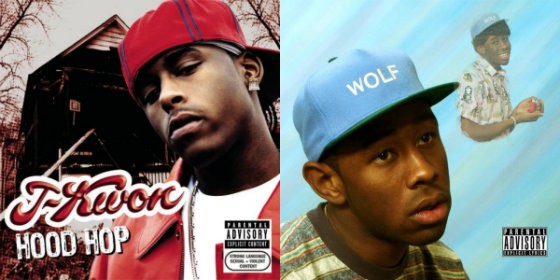 Do you remember J-Kwon? In case you don't, we'll remind you. He had a song called "Tipsy" back in 2004 that hit No. 2 on the Billboard charts. After that he seemingly dropped off the face of the earth for a while.

Now, J-Kwon is back and has been making waves lately. Kanye West gave him a namedrop in West's big-deal New York Times interview, which garnered the artist enough attention to bring to the forefront a new J-Kwon track dropped earlier this year, gunning hard for West's GOOD Music labelmate and former Clipse member Pusha T, as well as Odd Future.

To be fair, Odd Future and Pusha have both made jokes about J-Kwon and his status as a forgotten one-hit wonder in verses, but on the other hand, who cares? This whole beef seems incredibly random and sparked by virtually nothing.

Then again, that could be said for a lot of rap beefs. Maybe that's why it got me thinking about some of the other weirdest, most random rap beefs to come up over the years, which might be clues to J-Kwon on how to resolve his beef quickly.

Waka Flocka explained later that what happened between them was nobody's business, but it was over with and they were no longer on good terms. If this all sounds like a high school break-up, that's because this is what Twitter has apparently reduced us to in 2013.

4. Kanye West vs. 50 Cent The weird thing about this one is how ridiculously one-sided it's been from the very beginning. Fiddy has been going at Kanye for years and has almost never garnered any kind of actual response. It's sort of endearing just because of how desperate it seems, all while Fiddy claims he's bigger but sales beg to differ. Let's recap.

In 2006, Fiddy responded to controversial comments West had made about President George W. Bush (more on that later) by saying that Bush was a "gangsta" and Fiddy supported him. He also made sure to say "you know why it feels like Kanye West is as big as 50 Cent? Because he's safer." Kanye didn't respond.

In 2012, Fiddy once again tried to rustle Kanye's jimmies by calling his girlfriend Kim Kardashian "trash," and Kanye still declined to put forth a response. At this rate, Fiddy is going to be on his knees begging Kanye to beef with him by 2014.

3. Lil Flip vs. T.I. The Houston Press wrote the premier exposé on this beef back in 2005, and it's certainly weird and dumb. Let's revisit some of the details. The feud started over the title "King of the South," a form of royalty that I should note is neither legally recognized nor locally observed. Next Lil Flip's leprechaun outfit entered the picture somehow. Then things spilled over to family, with T.I. bringing up Flip's mom and Flip bringing up T.I.'s son.

It all concluded with a T.I. filming a diss-DVD (a revolution in disses!) and the two getting into a fight at a Cloverburger. Seriously, guys? I'm going to assume that each of them, being professional rappers with careers and all, had better things to do with their time than this.

2. Eminem vs. Insane Clown Posse Honestly, Eminem could have filled a list by himself. Remember his feud with Moby? If you don't, I'll have to save that one for another time, cause the one he had with ICP is much weirder. Back before they were big stars, Eminem was having a release party in 1997. He put out a flyer promoting the appearances of a lot of his friends including "Esham, Kid Rock, and ICP (maybe)."

When cornered by ICP, Em reportedly responded, "It says 'maybe.' Maybe you will be there; I don't know. That's why I'm asking you right now. You guys comin' to my release party, or what?" Which is about the most hilarious response he could have given them. ICP's was a less funny, "fuck no, [we] ain't coming to your party."

It's alright though. They squashed the whole beef by going bowling together. Yep, the feud ended just as strange and awesomely as it started.

1. Kanye West vs. George W. Bush I'm going to take a guess here and assume that if I said something bad about the president right now, he wouldn't care. He certainly wouldn't be personally offended or upset about it. I mean, who am I compared to the leader of the free world? That's why this one still puzzles me year after year.

In 2005, much of Louisiana and parts of Texas were devastated by Hurricane Katrina, and celebrities, as they often do, came together for a telethon. Kanye showed up and, as is his wont, made the now-famous controversial remark, "George Bush doesn't care about black people," in response to the perception that the government was not doing enough for hurricane victims. It was an awkward and much talked-about moment for sure, but somehow it reached and personally affected President Bush.

After his presidency had ended, Bush wrote in his book about the remark and then publicly remarked that it was the "lowest point" of his presidency. This shocked many critics, as it was such a seeming non-event compared to other things that occurred during his presidency, especially when considering the fact that Bush continually pronounced Kanye's name as "Conway."

It gets stranger. Next, Kanye actually apologized for his initial accusations, which was met with even more bewilderment by Bush critics and those who had endorsed the comments from the very beginning. To date I'm pretty sure it's the only apology Yeezy has made that he hasn't essentially taken back, making it even more significant. In the end, Bush thanked "Conway" and accepted the apology in a later interview, where he declared that he was not a "hater." WTF?