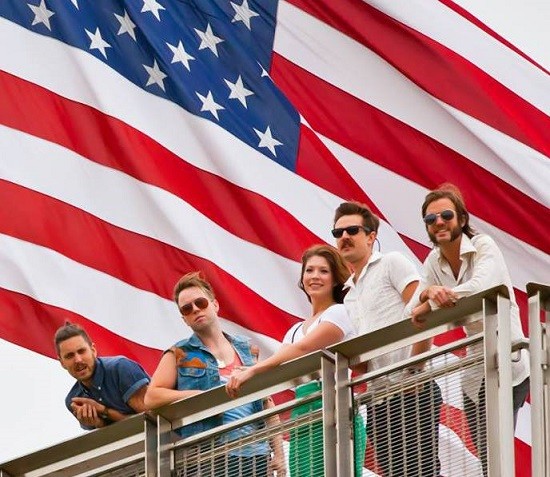 "Can you put that Phil saved the day? Can we make that the headline?" asks Matt Kavanaugh, singer and guitarist of St. Louis' Palace. Both his palms wrap around his frosty Urban Chestnut Zwickel as he leans forward and glances between keyboardist and trombone player Phil Grooms and the speaker Grooms unplugged. Prior to Grooms' exercise in Stretch Armstrong pliability, Blueberry Hill's Pac Man Room was being throttled by a metal band's miscalculated thrashes. Kavanaugh laughs, "That's a good start, right?"

Kavanaugh, Grooms, drummer Danny Hill and bassist Josh Eaker sit around three tables already damp with the condensation from their beers. Backing vocalist Crystal Owens is out of the city, visiting family back home. "We met Crystal through mutual friends. She's known all of us for a while," says Kavanaugh of Owens, who replaced original Palace members Sydney Scott and Jamie Finch last October. "Crystal has done theater for years. She was ready for it."

When Palace shared a bill with Cowboy Indian Bear last year, the Record Machine-signed four-piece was quick to share Palace's joyous theatrics with owner Nathan Reusch. "We didn't know Cowboy Indian Bear would go back and talk to Nathan. He had told them, 'When you go out on tour and you see anybody you think I should know about, tell me,'" explains Kavanaugh.

Even with Cowboy Indian Bear's blessing and Reusch's interest, Palace's disposition on being signed to the Kansas City label bounced between terrified and skeptical. "The first conversation I had with him I was so scared. I was like, 'What if he murders me if I say the wrong thing?' I acted like he was the Mafia," spills Kavanaugh. Eaker, a Godfather fan, had similar reservations, "I thought he was going to be this real intense guy, like what Matt said, like a Corleone. Just very in your face." Eaker takes a slow backhanded swipe at the air before him, like he is pushing away his initial nerves, "Then when I met him he was this very laid-back, calm, cool and collected person. It put me at ease with the situation."

"Without a doubt he's a mentor," confirms Grooms, who has somehow folded his long frame into the benches of the Pac Man room. "I've tried to get a record deal before. It was really businesslike, and they were really harsh people. I came into this situation with distrust and expected the worst. Putting out an EP is a stressful process when you have to deal with duplication and artwork. But Nathan's like, 'I'll take care of it.' That alone was worth signing to his label." Hill, with an eyeball on the fly he decimated when it came too close to his drink, hints at Palace's synchronous nature with Record Machine. "What's perfect about Nathan and the Record Machine is that it fits our family camaraderie. It just matches our personality so well."

"He gives us a place to crash when we're on tour -- 6:30 in the morning. It's cool. He mentors us and takes care of us," Eaker elaborates. Grooms adds to Reusch's paternal resume, "He's the only reason we played South by Southwest and Middle of the Map this year."

Middle of the Map is a three-day music festival in Kansas City. It is also Reusch's creation. The fest snakes along Westport, the arts hub of KC, and puts audience members in intimate venues with touted national acts who share plum lineups with burgeoning Kansas City and St. Louis talent. This year Nashville's resident chaos makers Jeff the Brotherhood headlined at the Riot Room -- a venue that may hold 100 people once it punches another hole in its already too-tight belt. St. Louis' Dots Not Feathers was on the same bill. Palace wound up opening for Tennis the final night of the festival. "He wants to help you succeed and he is not in it for money...or else he wouldn't have tried to help us!" hiccups Grooms before he somersaults into a bawdy laugh, "But he did, and he wants us to do well, and he believes in our music and our talent as a group."

Part of Reusch's belief is seeing the promise his acts have. "He told it to me straight, 'I will release your album they way it is right now, or we can make it really, really good. Really fun,"' recounts Kavanuagh of his first conversation with Reusch. "He knew many people in Kansas City who could make the EP sound more professional, proficient and marketable." Palace spent the summer rerecording tracks from the debut EP and recording new songs under Reusch's guidance.

"Nathan gave us the resources we needed to make it better -- Element Studios with Joel Nanos," states Grooms. "We would go and record for a day, drive through the night to get to Kansas City by day, go home for a week and he would mess with it. We would come back the next week, and one time we came back and he played three different songs for us, where he found these nuggets hidden in the EP's mixes and brought the songs to a professional level. They went from being indie-pop to being indie-pop songs I could hear on the radio. It's pop! We came in and said, 'This is great!'"

"It was already there for him from the EP's tracks. We recorded the handclap for 'Calling It Quits' at Sawhorse Recording Studio in St. Louis with Ian Bradshaw. Ian sent our tracks over for Joel to use. Ian was using all these awesome techniques to mic everything. He basically sent Joel a manuscript and Joel edited it. He took a handclap that was a sentence on 'Calling It Quits' and made it a page," illustrates Grooms. The results make Summer Don't You Dare sound like an entirely new record. "I cannot tell you how many times I heard that EP recording," comments Eaker, who compares it to the LP's refurbished tracks. "Then I walked into Element and suddenly that handclap -- it was there."

The difference was especially palpable for Sydney Scott, who left the band last fall, "We played the masters from the new record for Sydney and she said they were head and shoulders above what we created before," tells Kavanaugh. "How she dealt with it was, 'I don't feel like it's mine anymore. I feel like this is Palace.'" The paradigm for the new Palace sound is "We Want More." Recorded with Owens on backing vocals (she can be heard on "Waterbed," the LP's other new track), the song features an answer-back/talk-back piece Kavanaugh wrote for Owens.

"She's amazing at the dramatic side of the band," says Grooms. "She freaking nailed 'We Want More.' Kavanaugh describes the song in the starkest way: "There is trumpet blaring, me screaming and Crystal is just laughing." The track features the chorus just once before it launches into a reprise that allows Hill to play percussion on electric and acoustic drums, in Kavanaugh's words, "like Super Smash Brothers."

"I used a tape delay on that," Hill says, satisfying himself that the fly is truly dead by brushing it off the table and digresses. "I really like incorporating electronic drums -- and the idea of using electric and acoustic. One drummer using two sets of sounds."

Palace will celebrate the release of Summer, Don't You Dare on Thursday, July 25, at Plush. "A live show is just so vital for us. We go nuts," Grooms states. Palace plans on bringing back former members Sydney Scott and Jamie Finch for select songs during the record-release show as well, in addition to adding surprise covers among the stacked setlist. Grooms continues, "For us to throw a record release show at Plush, a place we've never played before, is exciting. And it's a large space, it's a challenge. We want to fill that space with energy and creativity and just have a party -- just have a good time."

Eaker ruminates on what it means to play at Plush for Palace's record-release show, "We've all seen bands we love at Plush. It's definitely sacred battlegrounds for people you greatly admire. You have to bring that same intensity. You have to think that it's a bigger deal than just going up to play a show. It brings a whole new aspect. I want to put on the best show I can because I know so many good bands have played in that same spot where we're all standing. The fact that it is the album release? It's finally happening and it is all going to be brought."

Palace Record Release show with La Guerre and Beth Bombara. Thursday, July 25. 8 p.m. $7. Below is a finished track off of Summer, Don't You Dare, courtesy of Palace.