Six Perfect Songs for Getting People to Leave 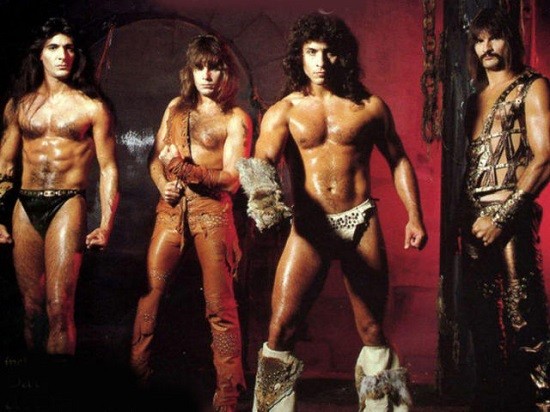 It has happened to me a million times. I walk into a bar with the intention of sitting down for a relaxing beverage, and in between the time that I've paid and my first sip of beer, I realize that some 22-year-old asshole is having a birthday party. And that all they want to hear is Usher, Nelly or the Ying Yang Twins. Or Paul Oakenfold.

I could get up and waste $5 to hear maybe six songs by the Alan Parsons Project, but there's always a chance that some hick oil-rig worker with a fat wallet will decide to override my playlist with that "Around the World" song by Daft Punk. Instead, I've figured out a way where I don't even have to get up, and I don't even spend more than $1 to clear out a group of assholes.

Nearly all of these online jukeboxes have smartphone apps. You can download them and control the machine from your phone. These jukeboxes, being the money pits that they are, also offer you the ability to play your song next for a small additional fee. So why not take full advantage of this fact and get your money's worth? I present six widely available songs that send bar-crawling imbeciles crawling out of the bar.

The Iliad, by Homer, is 704 pages. Manowar, a heavy-metal band that is the musical equivalent to Conan the Barbarian, wrote a song about The Iliad that clocks in at 28 minutes and 38 seconds. And it's a damn good song. Fortunately for you, there are a lot of people out there who sincerely hate and fear metal music. There are total squares out there who think guitar solos sound like fingernails on a chalkboard. When you play this song for those people, wimps and posers will leave the hall.

The Allman Brothers Band is known for hits like "Jessica" and "Ramblin' Man." What most people haven't gotten around to learning is that the 1972 album Eat a Peach features the song "Mountain Jam" -- the ultimate elevator music for dusty old freaks.

There's actually a chance your targets won't leave. The Allman Brothers has a pretty distinctive guitar tone that is pretty tolerable. But you'll turn the entire bar into a dopey blues club for a half an hour. Plus, a lot of people listen to jam bands, and those people are all insane. If anyone recognizes this song, you can probably buy drugs from them.

"MacArthur Park" is one of the best songs ever written. It's a fairly long and sullen song (7:30 or so), likening a relationship's demise to a cake being left in the rain. My coworker, who has the same haircut as every person in an early Nine Inch Nails video, once threw a piece of wood at my head for putting on six different versions of this song. Just be careful you don't put on the Donna Summer version or you'll end up revitalizing the dance party. In the event that they don't leave, who cares? Just listen to the sweet, sad croon of Richard Harris.

Everyone knows what this song is about, right? And when you hear it, despite the fact that it's an upbeat radio-rock hit from 1987, you can't help but remember the lyrics, written from the perspective of an abused child:

You'll receive a collective groan of, "Dude, come on," for the heavy subject matter, but who can give you shit for putting on such a powerful song? Pair it with the next on this list for a knockout blow.

Taking the tragic content song strategy one step further, "Tears in Heaven" is etched into the heart and soul of every being on the planet. You can play this song around a herd of goats and you can watch as they become noticeably sullen and depressed. No matter how many times the party plays that Bubba Sparxxx's "Miss New Booty" song, no one will forget that Eric Clapton's son tragically fell from a 53rd story window.

There is no finer song for clearing out a bar than "Echoes." The song, in fact, sounds like the song that would be capable of closing an entire city. Beyond that, it's just killer every single goddamn time -- pensive without being brooding and effortlessly beautiful. The lyrics to "Echoes" are explained by bassist and vocalist Roger Waters as being about "the potential that human beings have for recognizing each other's humanity and responding to it with empathy rather than antipathy."

So while Rogers would probably prefer for you to sit and feel empathy for the twelve people screaming, "SHOTS, SHOTS, SHOTS, SHOTS, SHOTS, SHOTS," you may instead take his song as a challenge issued to those people, the ones who lack the empathy to understand how annoying they are to everyone around them. Watch as people shrug their shoulders and gradually decide to find another bar to terrorize.