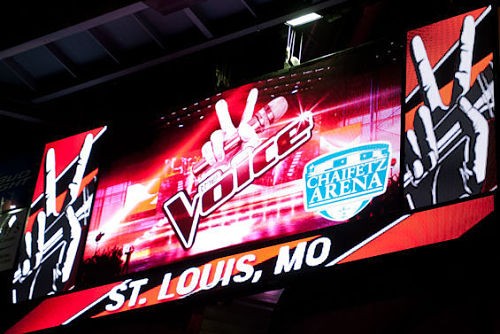 Apparently, this is my year for doing weird shit and writing about it for the Riverfront Times.

In March I reported on Wizard World St. Louis Comic Con while wearing Wonder Woman, Sue Storm and Pikachu costumes. In April I went through five straight nights of karaoke in honor of National Karaoke Week. In June I realized my lifelong dream of being on a game show and was dragged on my back through beer during an air-guitar competition. Earlier this month, I tried and failed to be on Wheel of Fortune.

And now I can add "auditioned for The Voice" to this impressive resume. You're awestruck, I know.

As a karaoke host, I hear from people all the time about how I should try out for any number of televised music/talent shows. "Allison, your voice is so lovely" or "You're totally weird enough to get picked," they say helpfully. But most of these programs are terrible enough to repulse even my inner attention whore. Or so I thought.

Two months ago, RFT contributing photographer Jon Gitchoff learned that The Voice auditions were coming to St. Louis. "It would be funny if you auditioned and wrote about it," he suggested. I considered for about four seconds the hell that Adam Levine's career-support device surely would put me through before I shrugged and said, "Uh, OK."

If I was going to audition for this stupid show, I was determined to do it right, dammit. Other than job interviews, I hadn't tried out for anything since my high school's flag-twirling team in '94, and I wasn't really sure if my voice or attitude were up to the challenge that awaited me. I'd already decided that I would hit a few karaoke bars several times a week to build up my vocal chords, but how else could I prepare for the misery that The Voice audition process surely would provide? I needed motivation. I needed preparation. I needed...a stage mom.

Enter Greg Crittenden, vocalist for Arthur & the Librarian and Speedboats.

Crittenden is one of those performers who can smile while singing, has a magnificent voice and isn't afraid of getting goofy onstage. He has also had to overcome some fear and awkwardness to become the showman he is now, so I knew he was the perfect person to guide me on this ridiculous journey. I bribed Crittenden to join me in my karaoke shenanigans, share his observations and offer tips that would knock Christina Aguilera's obnoxious hair extensions off. His big takeaway: I had no stage presence. After each of my karaoke bar performances, our conversations went something like this:

Crittenden: "Your voice is fine, but you've got to move around a little and make some eye contact." Me: "But I am moving!" Crittenden: "Raising your left hand occasionally doesn't count as moving, dork. You look bored and angry. Try walking around while you sing or something. Try pointing at someone." Me: "Do you want me to pass out?" Crittenden: "Only if it will make CeeLo remember you."

To add to this horror of actually engaging the audience, Crittenden made me promise to practice dancing around while singing into a hairbrush at home -- something featured in every '80s movie about big dreams or pajama parties. It'll loosen me up and look good to the judges, he said. Riiiiiiight. The only thing it loosened up was my ankle, which I bruised when I ran into the bed while fleeing my scratch-happy cat, who didn't enjoy my performance of "The Sign" and wanted to discourage me from singing near him ever again. I began wondering if I could collect hazard pay from the RFT.

Over the next two months, I became an obsessive singing machine. I whittled down my potential Voice audition songs to four, scrutinized footage of myself like I was Tony La Russa and hit the karaoke bars at least twice a week for practice. In an effort worthy of the mom from Gypsy, Crittenden valiantly waved his arms and pantomimed dance moves while I practiced, reminding me to cover at least four inches of the stage.

On July 20 -- audition day -- I awoke with the jitters and prayed that I didn't throw up. I molded my big hair, applied enough eyeliner to make Taylor Momsen proud, downloaded my official audition pass and warmed up for three hours before heading to the tryouts at Chaifetz Arena. Showtime, Synergy.

Except it wasn't showtime. The ticket checker at the arena refused to let me in because my pass showed that my audition was scheduled for the next day. What? WHAT? Yeah, apparently I'm an idiot who can't absorb details. Dammit.

So I did it all again the next day -- the hair, the whore makeup, the warm-up, the works. While in line at Chaifetz, I gawked at the other hopefuls. There were plenty of Taylor Swift and Justin Bieber wannabes who were convinced that this was their big chance at fame. There were older folks crossing The Voice from their bucket lists, refusing to yield to age or to the reality that their dreams probably wouldn't be realized. There were stage moms coaching their kids through unrelenting practice and pantomiming stage directions (which made me wish Crittenden were around). And there cowboys -- an absurd number of cowboys.

While watching all of these people, I began thinking that most of them would go home brokenhearted. A very limited number of people from around the country would continue to the next round, and with thousands of folks auditioning in St. Louis, the odds just weren't good. I was in this for a lark, but I knew that many of these folks had traveled and put tremendous care into perfecting their songs. My mocking heart suddenly was sorry that so many dreams inevitably would be crushed. 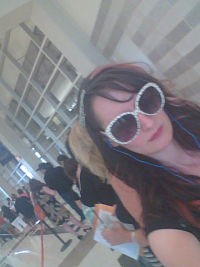 So what happened when I finally entered Chaifetz Arena? How were candidates separated into groups? Who judged the performances? Which candidates won a pass to the next round of The Voice auditions?

Turns out I can't tell you any of that, because I signed a contract that called for my soul and a crap-ton of money should I ever spill the beans. I can share that four and a half hours was an awfully long time to go through such a nerve-racking process, the arena was beyond freezing, and some contestants formed a camaraderie I didn't anticipate. I didn't make it to the next round, but I was pretty pleased with my rendition of Alanis Morissette's "You Oughta Know" (complete with angry-bitch moves!) and was touched when people told me that they enjoyed it.

Since this experience, my opinion about televised talent shows hasn't changed; I still think the programs are hokey, partly pre-arranged and focus on the wrong things (story line instead of talent). But for some people, these shows serve as the focus for drive, commitment and hope. And, with or without schmucky Adam Levine, those are elements worth celebrating.