Six Anti-Establishment Songs That Aren't by Rage Against the Machine 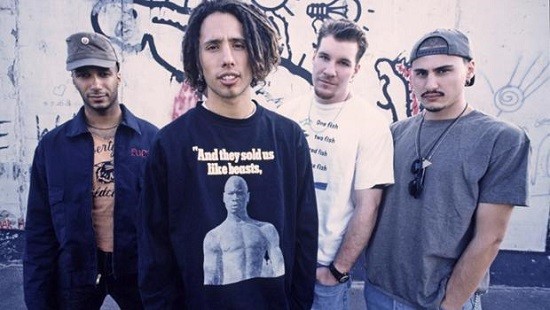 Everyone is pissed off right now. For me, it could be from to the head injury I gave myself last night and the accompanying tequila hangover. The rest of the nation, however, is more rightfully concerned with the needless killing of a black high school student down in Florida.

When I was growing up, whenever there was some sort of obvious injustice, people blasted songs by NWA -- but then something happened. Somehow, Rage Against the Machine became the poster-children for speaking out against injustices. I'm not going to dog too hard on RATM, because my friend told me a story about this one time Tom Morello got Gene Simmons or Paul Stanley to hang out with some roadie for his birthday, which is a solid bro move.

But here are six songs you should be listening to right now instead of the band that spawned the musical abomination known as Audioslave.

One of my favorite songs by one of the most unappreciated bands, "Advice on Arrest" is precisely what the title suggests. England's Desperate Bicycles was one of the bands that pioneered the DIY movement in the late 1970s. If you find yourself chanting these lyrics after the fifth time you've heard the song, I strongly urge you to listen to every single other song the band has written. And remember: "at the station they'll be questions, don't answer -- see a lawyer first."

The Coup has been around since 1991, formed by Boots Riley -- a brilliant rapper and activist, among other things. The group's first album was called Kill My Landlord. When I added this song to the list, I thought I could piece together a brief history of the Coup, but after looking into the group a bit further I realized I'm overwhelmed just by a glance of what Boots has done on his own. Oddly enough, he also has a band with Tom Morello called Street Sweeper Social Club -- which I also had no damn idea about when I started writing this. Good job, music journalist. Just listen to the song.

4. "Der Fueher's Face" - Spike Jones This is a song about farting in Adolf Hitler's face. There was an American propaganda film made by Disney that used the song. Donald Duck makes swaztikas. Not much else to say, although I'd be a dick if I didn't acknowledge some possible homosexual ridicule in the line, "super-duper-duper men." But lets hope that's not what Spike Jones meant. Either way, here is an article about Hitler farting and doing cocaine.

The Dicks were one of the most angry and influential punk bands from the early 80s. The album "Kill From the Heart" is one of the best records ever made. Their singer, Gary Floyd, grew up gay in east Texas - a place which is probably still extremely hard to be gay in. After being drafted into the military and forced to work in Houston, Gary moved to Austin, Texas, and started The Dicks. The Dicks wrote songs about being drafted, having foot fetishes, and like many punk bands, wrote a number of songs about hating the police.

2. Gil Scott Heron - "The Revolution Will Not Be Televised"

Gil Scott Heron calls out all of society in one fell swoop. Full lyrics available here.

Southern trees bear a strange fruit, Blood on the leaves and blood at the root, Black bodies swinging in the southern breeze, Strange fruit hanging from the poplar trees.

Yep, that was in 1939 -- can you imagine the risk that was being taken by singing this song? One of the saddest, most upsetting, and most necessary songs ever sung, "Strange Fruit" was originally a poem written by a Jewish communist schoolteacher named Abel Meeropol from New York. While the song was already put to music, it was further adapted by Billie Holiday and integrated into her live set.