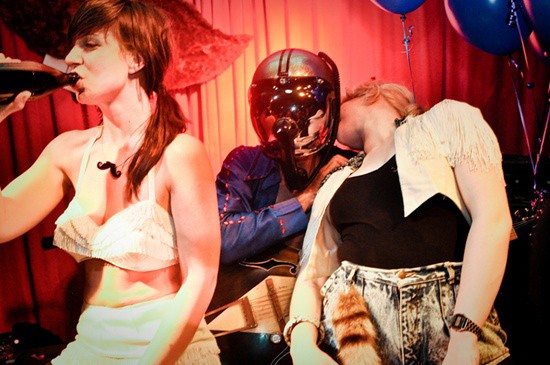 Monday mornings are funny, especially because for most of us here at RFT, Monday sort of begins on Sunday. In fact, all the days lately just sort of run together. These posts help us remember what month it is -- we hope it can help you in some way, too. This week's recommendations spotlight everything from hip hop and Americana to metal and pop. Read on, dedicated show-goers!

Susan Cowsill Duo Tuesday, July 16, 7:30 p.m. w/ Brian Henneman and Kip Loui @ Off Broadway - 15-$18 By Roy Kasten From this 2011 show preview: The most remarkable quality of Susan Cowsill's 40-plus-year career is its sanity. A child performer with the Cowsills -- the fabled Partridge Family-inspiring clan band -- Susan Cowsill should have burned out or flipped out, sunk into kitsch or nostalgia or just faded away like so many other bubblegum, one-pop wonders. Instead, she's just gone on singing with that ineffable tone -- part country, part pop, all soul -- and patiently releasing solo records steeped in the spirit of her home, New Orleans. Hurricane Katrina took much of what she loved, including her brother Barry. But her poignant take on rock and soul is never mournful, even at its most elegiac, as on the song "Crescent City Sneaux." She's a survivor who knows what to do with her musical gifts: share them with her audience with joy.

Lord Dying w/ The Gorge, Black Fast, Cathedral Fever, Death Horse @ Fubar - $10-$12 By Rick Giordano From The Best Metal Shows in July: Portland, Oregon's Lord Dying are the most recent addition to the legendary Relapse Records roster with a debut album hitting stores on the ninth of this month. The band has only previewed two tracks from the forthcoming Summon the Faithless so far, but they're two that show promise, filled with Baroness-esque (say that four times fast) riff-rock mixed with a dark aggression reminiscent of more recent Celtic Frost and Triptykon.

Bob Schneider CD Release Thursday, July 18, 8:30 p.m. w/ Gabriel Kelley @ Off Broadway - $20-$33 By Roy Kasten From this show preview: Even with his used-car-salesman name and pop sentimentality - song title "The World Exploded Into Love" isn't ironic - Bob Schneider still belongs to the Texas songwriter tradition, and not just because he remakes blues progressions in his own anti-hipster image. Or because he leads a band that fuses twang and rock 'n' roll like ZZ Top did when still on top of the charts. Schneider cares about songcraft - be the compositions satirical or bittersweet. Hoist a piña colada or just a longneck with him in concert; his stories and humor always have the bite and charm of his native Austin.

Dawes Friday, July 19, 9 p.m. w/ Shovels and Rope @ Off Broadway - $20-$23 By Jaime Lees Dawes makes rock for grown-ups. It's similar in style to Wilco, but with more drive and less confusion. It's Americana with an edge -- the songs are emotional and they always tell a story, but they're not overwrought. After a high-profile appearance on the Late Show with David Letterman, Dawes is riding high on the success of the single "Most People." The rest of the band's third album, Stories Don't End, follows the smart formula of taking something that's been done a million times before and making it just a little bit better.

Nappy Roots Friday, July 19, 8 p.m. w/ Black Spade, Family Affair, Doorway, Tef Poe, Corey Black @ The Coliseum Music Lounge - $20 By Tef Poe From "The Best St. Louis Hip-Hop Shows in July": Nappy Roots is a Southern-based rap group that scored big a few years ago with a chain of hits that seemed to dominate the radio airwaves. Sonically the group is similar to the likes of the Dungeon Family, but stylistically they share a slight resemblance to Wu-Tang Clan. On July 19 Nappy Roots will be performing live alongside an action-packed opening lineup consisting of a few choice members from notable St.Louis underground hip-hop crew the Force.

William Tyler Saturday, July 20, 9:30 p.m. w/ Darin Gray and Ghost Ice @ Foam - $7 By Ryan Wasoba On a purely technical level, William Tyler is remarkable. The guitarist summons melodies, counter-melodies, chords and bass-lines out of his instrument -- often all at once -- without a loop pedal or any other technological aid. He earns big-picture comparisons to John Fahey and Bill Frisell, two guitarists who neither flaunt nor deny their abilities. Like said pioneers, Tyler operates in the general realm of Americana. Unlike most who bear that tag, he embraces the dissonances of society as much as he praises its wide-open landscapes. America is complicated; William Tyler's multi-tasking compositions are too.

Bob Log III Saturday, July 20, 9:30 p.m. w/ Fat Tramp Food Stamp, Dad Jr. @ The Firebird - $12-$14 By Christian Schaeffer From this 2008 show preview: He plays a raggedy hollow-body guitar and kick-drum simultaneously, wears an Evel Knievel-style jumpsuit and sings through a telephone grafted to the front of a motorcycle helmet. But even if Bob Log III weren't overflowing with shtick, his brand of gutbucket blues and wild-child lyrics would still be worth a listen. His guitar-playing is a hodge-podge of bluegrass-flecked flat-picking and Delta blues-inspired slide playing, though most of his songs exist as a maelstrom of bent notes and rebel yells.

Dogbreth Sunday, July 21, 9 p.m. w/ Diners, Deer Vibes, Falsetto Boy, Heavy Weather, Worst Case Ontario @ The Radskeller - $5 By Mabel Suen Serendipity often plays a role when like-minded bands meet up on the road. Such is the case with this show, which combines two separate caravans from out of town. From Phoenix, Dogbreth and Diners dole out desert sounds in the form of happy-go-lucky pop songs, perfect for lackadaisical summer sun worship. From San Antonio, Deer Vibes ups the uber-melodic tone of the show with uplifting post-rock kept afloat with a variety of multi-instrumental elements. Three local openers support the sounds throughout the evening with deliberate, delicate songwriting (Falsetto Boy and Heavy Weather) and a pop-punk edge (Worst Case Ontario).