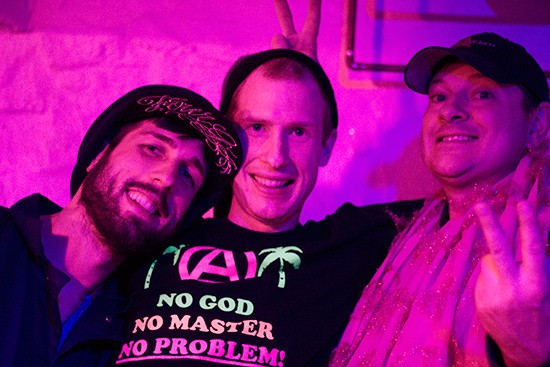 In this biweekly column, RFT Music gets to know local creatives, musicians and their missions. Get a slice of the local scene, complete with a snippet of sound and info about upcoming releases and shows. Stick around to see what St. Louis artists have to say whenever they Fill in in the Blank.

Jake Cohen heads the Barely Free Partial Prisoners, a local hip-hop collective that slings psychedelic sound amid a heady lyrical blast. While the band employs a revolving door of rhyme-slingers, its core members are Cohen and his accomplice Jason LaChance.

Barely Free first performed at a Cherokee Street basement in June 2010. Since its start, the group has composed four albums, starting with A Poem, A Gun in 2011. Barely Free's current project, 3 Pounds of Flax, is a nine-part collaborative effort. To date, three of the nine EPs have been released with six more coming down the pipeline. Cohen has toured the west coast twice and the Midwest once, bringing with him loosely fit songs that carry plenty of room for experimentation and improvisation.

Barely Free melds noise and hip-hop and pushes the whole affair through a punk rock filter. Performances are weird but refreshing, and Cohen anchors the sound with lyrics, letting all else go completely haywire. LaChance swats at a theremin while gripping a table full of noisy toys to the service of Cohen's vocal howling, which includes frequent off-mic screaming. Cohen's brainchild feels just as home in a night club as it does in a dusty South City basement.

We invited Jake Cohen of Barely Free Partial Prisoners to fill in some blanks for us. Click through to read what Cohen had to say.

The first show I ever played was... pretty hilarious. Holy!Holy!Holy! played a kick-off show at Black Bear Bakery for our East Coast Tour in Spring 2009, and we fancied ourselves a naked anarchist band of sorts. This is all good and well, until my parents showed up right as we were taking our clothes off. We screamed our collective organic hearts out naked with my mom in the front row. My parents were, as usual, proud of and confused by what I was doing.

As Barely Free, we didn't play our first show until June 2010 at Cranky Yellow with The Union Electric and Evolve. It went so well we kept doing it and haven't stopped since.

My favorite aspect of making music is... letting go of the anxiety. Looking up at my friends after we just played some song out of our asses in front of people and smiling and laughing because we could never do it exactly the same again. All the friends, lovers and fans I've met through pounding on a drum machine and rapping. Doing it all on barely any budget with hand-me-down equipment that hadn't been used in awhile. I love jams, practices, recording sessions and live shows as well as the places I've seen and the experiences I've had these last 5 years.

I've learned the most from... my brother, Andy Cohen. He's always helped me take everything in stride and strive to keep improving. He's also been the best (kept secret) freestyler in St. Louis for ten years running. His art, music and mind are no doubt why I make music to this day. Jason and Jeremy have taught me more nuts and bolts about synthesizing, recording and song structure as we've worked together. And without their support this project would've died on the operating table about 2 years ago.

The most memorable show for me was... there's been so many sweet shows for so many different reasons. Shouts to all the people who've hosted us at houses, venues, bars and parks over the years. We played May 17, 2012 at Black Bear Bakery with Little Big Bangs, Hobosexuals and The Barons of Tang (from Australia). Totally packed inside and out on the sidewalk, we debuted a bunch of new material that day and so many friends came out to kick it that night; it was amazing. The bands all rocked it and we had a great time into the early morning.

Some of my favorite local bands are... Little Big Bangs for a dancing good time, Sleepy & the Bedtimes make me gaze at my shoes harder than anyone, Hobosexuals, Jack Grelle and the Johnson Family, Hooten Hallers, WHSKY GNGR and Dubb Nubb for some good ole Missouri Folk, Foxing are a great throwback emo band, while Mastermind Einstein is my favorite local rapper. I host a radio show on KSLU called Burning the Cassette that plays all local music, so I've gotten way further into local music than I ever thought I would.

The St. Louis music scene could use... a more creative approach to shows and releases? A more open approach to new artists trying to gain experience? A chill pill to take itself less seriously? Real community and communication over competition? Less rapists? More cheap, healthy late night food for after shows? Any of those might be a good start.

The most difficult lesson I've learned while playing music is... that there is no success, no failure, no right way of doing it. It's about what you directly experience. And that, as we all know, red hair is caused by sugar and lust.