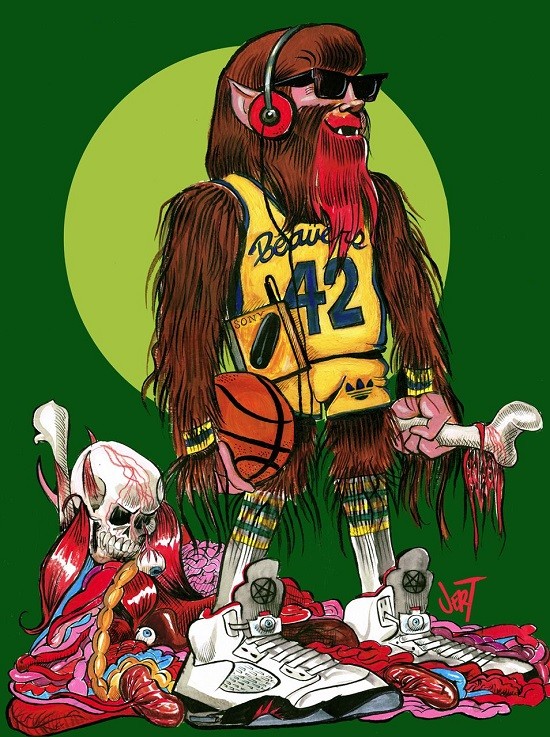 The RFT's office has an interesting soundtrack of its own this summer. Take, for instance, the saxy guy tootin' for loose change outside or the busker heard down the street letting out a blood-curdling "Go, Johnny! Go-oo-oo--ooo!" a mere block away from Chuck's statue. How about the sound of children's laughter coming from down the hallway as intrepid RFT Music writer Allison Babka conducts a special social experiment? Stay tuned to learn more. The hits just keep comin', folks.

Jert and Partney: Propaganda in the War Against Boredom w/ Dropout Boogie DJ Collective @ Mad Art Gallery 7 p.m. | free The artist who calls himself "Jert" is Jeremy Townsend, former St. Louisan and singer of 12 Gauge Blues many moons ago. His work is AWESOME -- see for yourself; he's responsible for the art that leads this post. Then, come to the oepning of his art show, where he and fellow subversive Aaron Partney will be selling prints and doing live painting sessions. (DH)

Care to get a bit weird instead? Check out the musical styles of Priests from DC or catch the experimental duo Ou Où. Click the links to learn more.

For even more fun, consider the Indie Rock Ice Cream Social, the Defeated County's EP Release and The Urge.

Ian Anderson (of Jethro Tull) @ Peabody Opera House 7;30 p.m. | $32-$92 Anderson performs his composition, "Thick as a Brick," for the first time since 1972, as well as his new album, a aptly named, "Thick as a Brick 2." While we're on the topic of flute-rock, check out these six badass flute bands that aren't Jethro Tull.

Night Beds w/ Jump Starts @ Off Broadway 8 p.m. | $12-$15 Night Beds has been garnering more and more great press this year. Check out this rather unsettling video and see for yourself why. (DH)

Paul Thorn w/ Candy Coated Evil @ Old Rock House 8 p.m. | $20-$23 Before turning his attention to music, Paul Thorn was a Middleweight Champion boxer. You should probably get whiskey drunk and challenge him to a fight outside of the show. Maybe you'll get a song written about you! (DH)

Note: Though we wish we could, we can't feature every great show happening in town in just one measly post. Peruse the St. Louis concert calendar for more ideas any time. Let everyone know what you're looking forward to seeing this weekend in the comments below, and send show tips to clubs@riverfronttimes.com to be considered for inclusion on these lists.