I Took My Mom to the Dave Matthews Band Concert Last Night, Where She Tried to Get Me Drunk: Review and Setlist

Last night I took my Mom to see Dave Matthews. She loved it.

I walked through Verizon Amphitheater's parking lot around 7 p.m., only to be turned down at the gate. My tiny voice-recorder had apparently violated the venue's strict policies, so I trudged back through the crammed lot, passing tail-gaters and hula-hoopers on my way. This was a shame, especially since I planned on capping drunken one-liners that my accomplice was sure to spit out throughout the evening. Making cash off a bootleg is out now, too. I guess I'd better write a show review.

I went back to the gate to meet my mom, who was decked out in a Dave Matthews Band (referred to as DMB from hereon, as is customary) jersey from roughly ten years prior, and headed out to our seats. While she mused about her last DMB show, which, by her account, involved much more ecstacy (XTC?), we passed by crammed lines at the stands selling over-priced beer and wine.

"These aren't real hippies," my mom said, pushing past a distinctly decked out fan, who wore a headband of sunflowers above a dress with a tangerine hue. We missed Grace Potter and the Nocturnals, who I'm sure delivered a lovely show. I mean, how the hell else would a band be opening for the beloved DMB if they couldn't deliver?

We sat behind the pit, just left of center. The view and sound were clear, save for Dave's voice. I'm not sure if his accent tends to muddle the words or if Verizon's system had him mixed low, but lyrics were mostly indiscernible from start to finish. Constant crowd-sourced singing seemed to fill the gap, but there's no doubt new fans had a hard time following along.

DMB started the set with a sticky groove, reaching through with guitar, violin and horn solos. Each subtle shift was met with resounding "whooos," which only multiplied through the show's end. In fact, "whooo girls" were out in full effect last night, working as DMB's secret instrument, and signaled crowd approval.

"I haven't smelled any pot yet," my mom said, surprised and a little disappointed. By the end of "Tripping Billies," the second song, a whiff of dead skunk passed by. "Oh, someone's got good shit over there." I'm still not sure if we were smelling an actual dead animal or not. My mom is cooler than I am.

"I hope you're havin' a pleasant evening," Matthews uttered on the mic. He smiled and waved, sporting the modest blue-collared look that no doubt helps him sell $11 cups of wine and $35 t-shirts. Suddenly, my mom had the urge to grab a drink and some merch, so we hit the stands. At this point, the show was in full effect, with full-color projections and crowd favorites, including a dense cover of Tom Petty's "Runnin Down A Dream," which featured the ever-present bitchin' guitar solo.

After grabbing some of Dave Matthews' precious "Dreaming Tree" wine, we headed back to our seats. Two 60-somethings, decked out in damn-near formal wear, had occupied the spots in our stead, and looked profoundly miffed when we shooed them off. As the show went on, the songs ebbed and flowed. The crowd clapped with some beats, swayed back and forth with others and somehow kept a steady stream of beach balls bouncing around overhead. 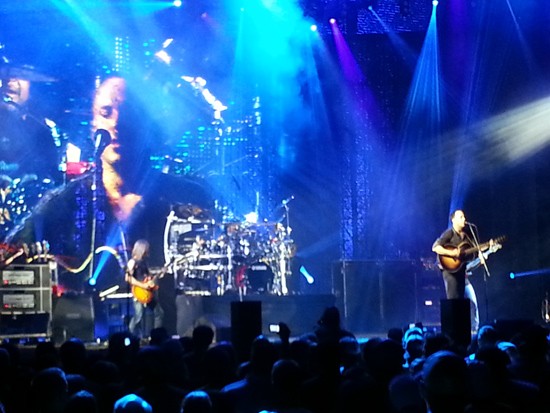 At one point, my mom leaned over to utter some song title. When I couldn't understand, she loudly clarified with, "It's the one when every one gets up to go to the bathroom."

So we left for quick relief. With the stage area being a sauna, I wanted to explore the lawn. I saw, predictably, more hula-hoops and a sloppy couple slobbering on the grass. We reached the furthest point from the stage when DMB busted out "Crash Into Me," which summoned a bevy of raised cellphones. Just like clockwork, the crowd fizzled out after the big radio hit, but DMB dished out more songs for starving fans of a precious last few. The band was summoned back by "We want Dave," a chant that started and died four times before really catching on. I'm fairly certain the prominent "whooo guy" behind me can take credit for that one.

Between the set and encore, Drummer Carter Beauford ran out to toss drum sticks to the pit. Suddenly, that green, fan-made sign that kept popping up through the show with "Carter: Please Stick Me For My 30th" seemed significantly less suggestive. You should know that the woman who made that sign got her stick, as did a toddler, who was sitting on his dad's shoulders.

DMB cleverly doled out wanted jams by peppering radio hits between newer songs and covers. Show-goers were fed extended cuts of classics with lengthy breakdowns and several solos. This band, after all, is indulgent. Solos are certainly indulgent within the songs and DMB's own lyrics push this idea of self-indulgence. "Pantala Naga Pampa" contains the lines "Come and relax now / Put your troubles down / No need to bear the weight of your worries / Just let them all fall away."

DMB has no shortage of smiles on stage. Beauford can't hold back giggles, even when nailing down solid grooves. When he's not playing, saxophonist Jeff Coffin seems to be gleefully belting vocals, even off-mic. Bassist Steffan Lessard bobs, almost comically, to each beat. One gets the distinct impression that every man on stage loves these songs and loves to play. That vibrance no-doubt extends off-stage.

"You know why they're smiling so much, right?" my mom asked. "They're thinking, 'You know how much fuckin' money we just made?'"

The set list was not attainable under the venue's totalitarian security regime. I was told by a reliable source, my mother, that DMB set lists are usually posted through the band's official Facebook page. I verified this fact. See for yourself.

- Best quote I actually overhead on the lawn: "If you love this song, take off your shirt." - Runner-up: "Fuckin' Tom Petty!" - Number of times my mom got hit on infront of me: 2

Hardest person at the concert: The five foot tall old security guy clad in yellow. He fearlessly pushed people from the lawn out of our section all night and never smiled. Not even once.