Punk's Not Dead, It's Having a Mid-Life Crisis 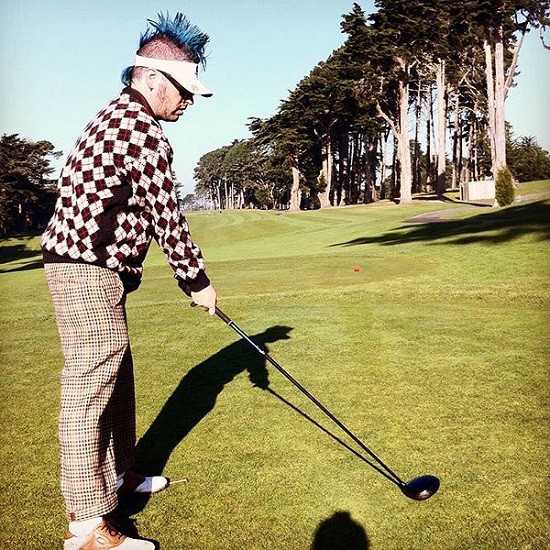 Punk rock is a money toilet. The record/mp3 collecting involved is the most addictive drug that I've ever encountered, and most of my alcoholic/drug addict/straight edge friends would probably agree. But are we all just living in a dumber cliché than the one we're supposedly and lazily rebelling against?

It doesn't feel like it. I still get the same rush listening to the Dead Kennedys' Plastic Surgery Disasters LP that I did when I was twelve after my first girlfriend turned me into a non-poser. I've lost count of how many local bands I've played in the past thirteen years (with only one piece of vinyl to show for it so far) and I still love it. Punk/Hardcore/non-shitty Metal/rock & roll/blah blah blah seem to be the main e-brake for any of us becoming real adults though. I don't care about making money for writing these stupid, angry, 45-second long riffs. But I wouldn't hate it. Anyway, no one's buying, so it's a moot point.

I just watched the One Nine Nine Four documentary (above) about the year punk broke (1994, if you're keeping score). It shows interviews with Fat Mike, Brett Gurewitz, Tom Delonge, Fletcher Dragge and a bunch of other band dudes that were staples of my teenage record collection, all reminiscing about the various unexpected times in their lives when being in a punk band suddenly became a feasible career. Some seem to have a modern re-hashing of Steven Blush's take in American hardcore that hardcore punk is dead, most don't. I hate Steven Blush. He's a great documentarian of that time period, but I would rip his skin off and bury him in a coffin full of time-released landmines if I ever met him. Granted, I wasn't born until 1987 and only have the songs, history books and YouTube clips to judge from. But ALL of the shit since then just doesn't count? Screw you, Steven Blush.

Back to the point, the documentary was good at pointing out facts and events that happened. But between this and the article about the top ten punk rock millionaires that came out on dying scene's blog a few weeks ago, I don't know what think anymore. I like writing these songs because I have an anger problem. I like watching my friends who with the displaced anger and form intense, loyal and moronic bonds immediately.

I like touring because it's the cheapest way to go on vacation. Plus, you're actually contributing, instead of just mouth-breathing up air in Brooklyn or Wisconsin while you check Yelp for pizza slice recommendations. The fact that the bands I look up to have road crews and can tour with their entire families now blows my mind. It doesn't matter if a tire pops or gear is stolen, they just have more waiting while their iPads recharge in the bus' lounge area. My ideological forefathers have become complacent and comfortable while they all go bowling and play golf together. Good for them, I guess. It's ridiculous what people make their millions on these days.

But it doesn't seem very counter-culture anymore. Listening to them gab about old skate videos and the opening of Gilman tire me the same way that listening to my uncles start jawing about their 401ks or how much they liked Paul Blart: Mall Cop does. Jaded boredom. Maybe it's due to the fact the there's at least one store in every mall to buy all your cookie-cutter skateboard needs, which would be a valid point if any punks still rode (seems to be more of a backpack hip-hop thing now, if popular culture is to be believed). Maybe it's due to the fact that they are all getting into their 40s/50s and they don't need to sleep on a cement floor of a warehouse in Memphis when it's balls-shrinkingly cold outside, with no blankets. The grey area between playing a DIY basement show and Blink-182 selling out Madison Square Garden is the widest gap in this "career path" imaginable.

Is it worth the anxiety to delude yourself into thinking you could have $85 million like Travis Barker by making dick jokes and writing two minute songs while wearing a Famous Stars and Straps cut-off T? As astronomically unlikely as that outcome is, it's still technically possible -- like .0005%. Hell, Fucked Up has a retirement plan...a retirement plan from Matador Records. Maybe the money's in hiring choirs and dicking around with didgeridoos, in between over-produced street punk songs.

I got the same feeling from One Nine Nine Four as I did from watching Ice-T's The Art of Rap, watching a bunch of middle-aged men who haven't been in the pit/sold drugs in years. They have great stories and make great music. But they're out of touch, and for the most part have been coasting on their back catalog for decades. It makes me want to prove them wrong, just like anyone thinking about anyone from the generation prior to them. But the whole "what's the point?" thing rears its ugly head oh so often. This year's Chaos in Tejas was probably one of the most attended...I guess? You'd think roving "gangs" of like-minded music dorks would get along. But I only made friends with people from bands I'd recognized from either my band(s) going to their town or vice versa. I guess it is a lot of drug/booze-addled anti-social miscreants in one unbearably, humid flat top in the middle of Texas. Not the best time for hugs, unless you're at the gross pube-filled motel pool.

The internet changed the face of everything in the music industry around 1999 or so. We've all gotten so good at never paying for anything that most middleman jobs in the industry have dried up like dehydrated flies. The ability to record your demo on someone's phone, edit it when you are smoking outside of practice, and then post it to any numerous social media instantly is amazing. It has also created an over-flooded market where great bands go unnoticed and erriblet bands tour too much. The biggest money-making DIY stuff right now is that mutation form mosh-core that added keyboard choruses and auto-tune. It is nu-metal boy bands. All thanks to the Defcon1-level viral nature of the internet. Boy howdy, they are depressing to watch. What's even more depressing is that they get all the girls and are the bad examples to pull from on sound scan spreadsheets. These bands are the peoples' champs of the iTunes revolution? A Day To Remember is the highest paid band that's ever been on Warped Tour, at an alleged $19,000 a day. What??

Chaos sure had a ton of kids that traveled from all over to see Los Crudos, Infest, Framtid, the Damned, Bolt Thrower, etc. There were probably 1500-1600 at Infest alone. it was overwhelming to look back at from the stage dive danger zone. Now, A Day To Remember has double that, at least, every single night they go anywhere. The guy playing bass in that band could actually say "I won't get out of bed for less than $2000" and be taken seriously (and pretentiously) by his handlers or some other useless whoevers. Something about that just seems wrong.

It brings joy to my heart that my friends in Lumpy and the Dumpers and Shaved Women have started to get some good national recognition. It makes me jump for the moon that Weekend Nachos is the biggest active power-violence band, even though John Caution would yell at me for labeling it as such. The fact that No Class, Wild Child, Brain Tumors and Voight-Kampf have all been put out by Deranged in the past year or so is groin-grabbingly awesome. But are these the career pinnacles that we're hoping for now? I know that since the whole "IN THIS ECONOMY?!?!?!" thing started, the DIY approach is being taken by more and more people everywhere as a means to stay afloat. But how did normal people get better at DIY than we are?

I will never stop listening to punk in it's various forms and sub-genres. I am happy to drown in the money toilet. You can attempt to pry my last dollar bill out of my cold dead hand, attached to the arm sticking out of said toilet. But with upcoming tour dates staring down my to-do list, I wonder how many excuses I'm going to have to come up with for my regular friends to justify the fact that I'm probably always going to be in the red from trying to get like 500 people to buy one pressing of a seven-inch, and killing van after van with road-clogging, gas-guzzling miles of farm town.

All of this leaves me with questions that have disheartening answers: I have $100 to my name at the moment, because my dad gave it to me as a birthday present. How did Fat Mike sell his house for $5 million? How did Trash Talk get in a new MySpace commercial? Why is the singer of Impact Unit/Mighty Mighty Bosstones the announcer on Jimmy Kimmel Live? Why did Atticus clothing help net Mark Hoppus $60 million dollars? WHY THE HELL DID GREEN DAY WRITE A ROCK OPERA,AND WHY DID ANYONE GO SEE IT?

Punk's not dead, I know, because for one reason or another teenagers will always be pissed off and find guitars/drums and scream at strangers. But when will the wave of Youtube DJs, dubstep and clubby trap/hip-hop give anything else in music the breathing room to make money to live on again? And when the punks do make money, does that negate their so-called "punk" status? Regardless, it doesn't seem like I'll find out for myself anytime soon -- but that isn't about to stop me from playing the music I love in dingy basements across the country.

"Three chords and a cloud of dust, in DIY I fucking trust!"