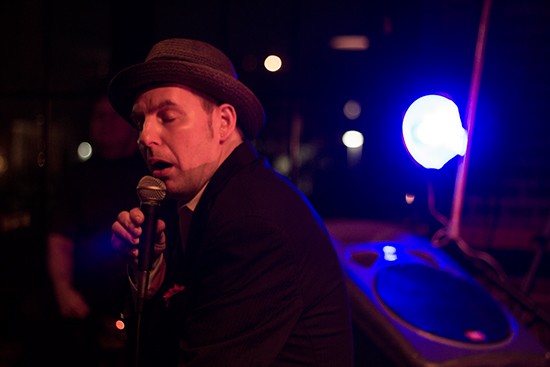 Skin Graft Records pushed math-rock and noise in the early '90s, an era when those terms weren't so faux pas and hardcore tended to leak into other genres without fear of scuffing up some favored tradition. The label's roster grew through the next decade, hoisting up the Dazzling Killmen, Melt-Banana and U.S. Maple among many others.

Mark Fischer, native of St. Louis, started Skin Graft in '91 while working for Touch and Go Records in Chicago. After bouncing back and forth between the Windy and River cities, Fischer finally planted himself in Vienna, Austria, where he now resides. On June 21, 2013, Fischer returned to St. Louis for the Skin Graft Homecoming and curated a swampy indoors fest that featured three of the label's active bands. Xaddax (Brooklyn), Lovely Little Girls (Chicago) and Yowie (St. Louis) hit the stage with mind-melting mergers of progressive rock, jazz and noise.

Al Johnson was tasked as the host for this Skin Graft homecoming. One of Skin Graft's chief soldiers, Johnson spent the '90s and '00s striking odd feelings into the hearts of thousands. From his run as vocalist for U.S. Maple to a cameo in Stephen Frears's film High Fidelity (starring John Cusack), Johnson has forced an unsettling chill down the spines of the unlucky many to see him contort and moan.

On June 21, this full-color character traveled from his home in Dubuque, Iowa to stomp on Schlafly's upstairs stage with words between bands and acted as the cartoon-host with ethereal advice. This is an excerpt of Johnson's first speech, which tugged at the nerves of attendees with nostalgia on Skin Graft and odd sentiments for St. Louis.

"My friends and future lovers: run towards the blade! Only real red Cardinal blood spills and spells your next set of moves: 1. Teeth crash into cheeks. 2. Be on patrol-like a vulture. 3. Last night a strange man called me; pray to God that tonight a strange man calls you. 4. If lacking-fetch a beauty mark. 5. Chewing gum is for slaves. Don't be Bubble Yum's bitch. 6. And finally: Fix your blonde; chances are it leaks, squeals and whoa complains... nothing a decent set of channel locks cannot fix. 7. Ladies: There's a fine line between a douche bag and THE DECENT MAN."

Prior to the Homecoming, Johnson spoke to us about many things. We here at RFT Music often cast our judgement upon performers in the form of show reviews, so we thought, just once, we'd give the artist a chance to impose a judgement of their own show, and of our city. Turns out, just one day in our humid midwestern air will make a man crazy. See for yourself:

RFT Music: How was your arrival in St. Louis last weekend? I trust you were comfortable and healthy?

Al Johnson: Healthy, yes. Arrival into St. Louis is an ugly animal with the bridge-work is problematic. No; it's rather unbearable considering the stand-still traffic. We re-routed several times in an attempt to avoid the traffic to no avail. However, I am now stunned by the size and numbers of your "supermarket" churches. Evidently Heaven and real-estate go hand in hand. My only hope is that the pearly gates don't resemble the Best Buy blueprint. 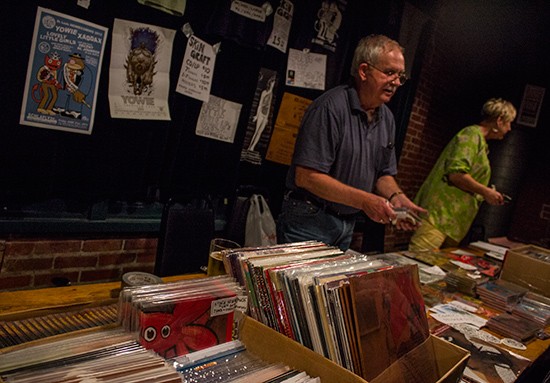 Did you encounter any oddities on your way to or from our city?

I encountered Duke's small batch beef-brisket-tobasco drenched beef jerky. For that, I am grateful. Also, our lunch in "boys-town" near the Commerce bank was a pleasant surprise. The lightning in St. Louis seems angrier than most I've seen. Also, on the night of the event I had my manager swipe a chartreuse flower from the venue neighborhood. For that I apologize, but the damn thing provided me with powers beyond my control. For that, I am not sorry.

How did you feel watching eager fans finger through your goods, including Shorty, U.S. Maple and old posters from your own apartment?

I bring items from my personal collection rarely, but when I do it's because I believe somebody else will care and value these one-offs like I've done all these years. A lot of the posters were rare, from the Netherlands and Italian shows. The singles, set-lists are very rare, some 20 years old. I want people who love me to know I love them...it's not about the money.

What was the best thing you ate during your time in St. Louis?

I ingested a gaggle of gnats at the Fischer residence. The breakfast Mark's (Fischer) mother and Dave prepared was nothing short of spectacular. Their pepper shaker scared the hell out of me; when I went to season the biscuits and gravy it began to vibrate and curse, I'm positive it's haunted.

Finish this sentence: "The Arch was..."

The Arch was in its usual place. I have traveled to St. Louis many, many times throughout my childhood. I don't dislike it; after all the years I'm just bored with it. Can you do something a bit different with it? Flip it upside down? Place one end of it into the river, yeah, do that.

Hit the jump for more commentary by Al Johnson. Following our interview, I asked Al Johnson to quickly review each band like a ruthless peer judging from the sidelines. I limited his summations to twenty words or less, and Johnson painted a straight, caveman-like picture of the show on June 21, 2013.

Lovely Little Girls: Pleasantly surprised. Interesting vocal harmonies with a band that can hypnotize audiences. Humble and unique. In a pop-template this could work big.

Yowie: Your Led Zepp. They enticed me outta the dressing room. When this band knows they're winning, they're smiling. I love that.