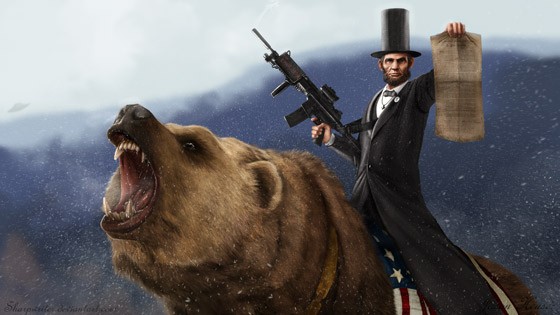 Tomorrow is July 4, Independence Day, a celebration of the foundation of this fine nation. Fireworks will be procured, limbs / fingers will be blown off and subsequently barbecued, beers will be consumed and above-ground pools will be urinated in. It is the American Way.

In order to celebrate in true style, as the founding fathers intended it, I intend to secede from the neighborhood in which I live and declare my independence by pouring the pitcher of iced tea that I have in my fridge down the sewer. I will also be melting everything metal in my house down into tiny little balls. I don't own a gun, but my slingshot will be at the ready as soon as I see the whites of my neighbors' eyes.

I shaved my dog today and fashioned her fur into a wig that I then doused in baby powder. I tightened the snare drum from the drum set in my basement to the breaking point, and as soon as I leave work I'm going to convince the flute busker on Delmar to join me in a Fife & Drum march of battle down the streets. I suspect he'll be into it -- I got a fiver in my pocket.

What I'm saying here is, we will be taking the day off tomorrow, to fight for independence from my neighborhood's tyrannical lawn-care regulations. Fear not though, RFT Music will return with more St. Louis music news and entertainment on Friday.

Have a happy Fourth, and may the good Lord steady your hand in battle against your oppressors. "If this be treason, make the most of it!"