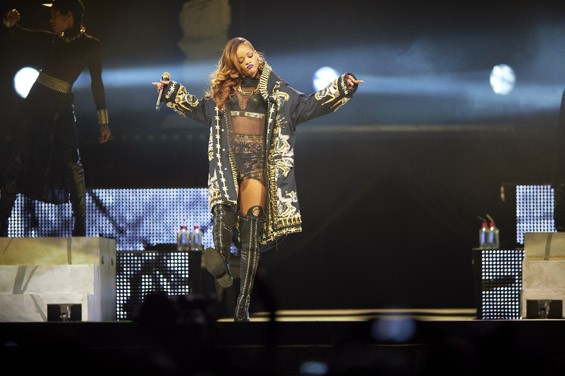 As I write this, no one in the world knows where Edward Snowden, leaker of all the secrets he could get his grubby hands on, is located. While the irony of the U.S. government having a total lack of information on this subject cannot be lost on anyone, I would like to use this platform to suggest to the United States government that Snowden is simply just following in the hallowed footsteps of another freedom fighter, Rihanna.

How are Edward Snowden and Rihanna the same, I hear you cry? Well, one of these two megastars confused the world's media with an international tour that resulted in journalistic fury, delays, wasted time, intrigue and barely anything that the journalists could write about beyond, "What the fuck is going on?" only with fancier words. The other one is Edward Snowden.

If you remember (and how could you possibly forget?!), Rihanna spent a week in 2012 jetting around the world in a plane full of journalists on what she called her 777 Tour, as it took in seven concerts in seven countries in seven days, and it took place on a Boeing 777. While it should actually have been called either the 777777 Tour, or the 777 Squared Tour (603,729 Tour for short), naming was the least of Rihanna's problems as the conditions among those "lucky" enough to be trapped on the fateful plane following a somewhat unreliable pop star around the world descended into a cross between Lord of the Flies and Jersey Shore.

The news of Snowden has been characterized by confused, lost journalists trapped in an international hinterland while the object of their desires mysteriously remained slightly out of reach, one step ahead of them. While, at this point, the Snowden/Rihanna Plane comparisons draw themselves, it's not my job to go "Eh? EHHHHH?" and leave you to your own devices.

Since Snowden fled Hong Kong over the weekend, after the U.S. filed an extradition attempt but managed to somehow mess up the paperwork, a cabal of the world's top-class journalists has been following him around. He's meant to be in Moscow, supposedly, so every journalist immediately jumped on a flight there, only to be met with confusion and mystery as no one could actually see Edward Snowden. It's almost exactly like the time a plane full of journalists followed Rihanna to Stockholm only to find out that, actually, she wasn't there yet. In the latest and best comic twist, this Monday the cream of the world's press decided that Snowden had boarded a plane to Havana, the latest stop on his "Enemies of the United States Who Won't Extradite Me Tour." Of course, they were wrong, and realized upon arrival in Havana that not only was Snowden not on board (in fact, there was probably a moment of perfect farce when all the journalists onboard realized that Snowden wasn't there, and that they were trapped on a very, very long flight unless the pilot agreed to turn around for the sake of the news, which he didn't), but that he was possibly still in Moscow, or maybe Iceland, or back in Hong Kong, or had maybe fled to China. We just don't know.

Edward, if you're out there and you're reading this because you are furiously googling yourself and clicking "News," then it is my firm belief that should you manage to obtain corporate sponsorship and a songwriter, then in fact you can spin this entire trip to your advantage and end up in a situation where you too are wearing nothing but European money and flowers. Until then, make journalists fly around the world for no reason while obtaining nothing of value they can use in their stories. You're doing God's work, son.

United States government, if you're reading this (and I'd imagine you're reading it as I type it, rather than on the blog it was posted to), then I would place my bet on Edward Snowden doing an excessive number of tequila shots, being somewhere in the vicinity of Chris Brown despite all advice to the contrary, and being late for an important appointment. I hope this helps.