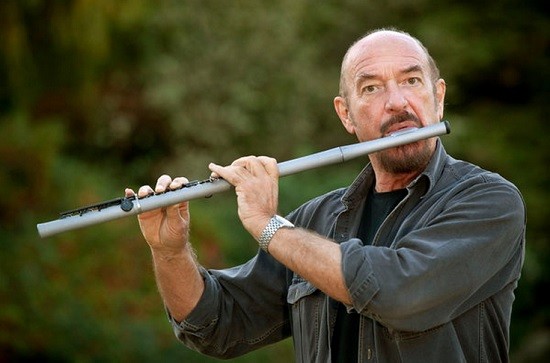 I remember in the sixth grade when we were all arbitrarily assigned instruments to learn. It was hell for broke parents who were now forced to buy or rent instruments they knew were just going to collect dust in a broom closet. And it was hell for us kids, as when you are a young boy, everything around you is considered to be a weapon. Myself, I got a trombone that I would use the arm of to smack the kid in front of me. It was relatively neutral and genderless, rendering me safe from Ross, the gigantic twelve-year-old Italian kid with the thin mustache. Others were not so lucky, and had to endure the torment that comes with playing the soft, emasculating flute.

But the flute is some serious business. The shakuhachi, for example, is a bamboo flute from Japan, designed by traveling zen monks to play songs and beat their enemies up with. They're still used today for defense. In China, martial artists carried flutes and hid daggers in them, or rigged them up to shoot darts. Or for a modern example, turn to the sacred land known as "Tampa Bay," where recently two rocket launchers and a FLUTE GUN were turned into authorities for $75 and some baseball tickets.

So in tribute to the disrespected woodwind instrument, here are six of the most badass flute bands that aren't Jethro Tull. Because let's be honest, you already knew about that one.

Peter Gabriel played the flute. Not all the time, but sometimes. If you can tear your eyes away from how scary Peter Gabriel is, notice that Phil Collins is wearing a shirt that says "Genesis" on it, and is also playing a whistle. Despite the incredible energy of this performance and the intensity of that flute, Genesis would later go on to suck ass and never use the flute.

He'll probably deny it now, but growing up, my dad forced me to listen to Steve Winwood a lot. And the Pointer Sisters. But before Steve Winwood was ruining my life with that song and that haircut, he was playing in a band called Traffic, alongside the legendary and now deceased flutist Chris Wood. This song, "Forty Thousand Headmen," will incinerate your ears with the heat of a thousand denim shirts burning in Winwood's mind's eye.

I don't hear a lot of love for Camel, a 1970s prog-rock outfit that had album art that looked like a pack of cigarettes. While I still don't understand why the hell you would do that, I do know that Andrew Latimer and Mel Collins can play the hell out of the flute. Check out the dual flute assault of "Rhayander/Rhayander Goes to Town," an instrumental song that is about some hunchback who cares for a goose or something. Camel would later release an album called Moonmadness which would feature album art of a camel wearing a spacesuit.

The only people I know who listen to Gong have done a ton of acid. The band has a gigantic catalog that I fumble through every year or so. It's probably pretty important that you watch this live video from 2010. And stay away from the acid that has a pyramid with an eye and a set of wings on it, unless you enjoy spinning in circles for a few hours.

Look at these guys. They all look like they should have their own '70s detective TV shows, wherein they strangle bad guys with gold medallions. Instead, they tear through some melancholy love ballads and destroy you with songs like, "I'm Just A Singer In A Rock & Roll Band." The Moody Blues, who I have been foolishly ignoring for thirty years, named themselves under the assumption that they could get an endorsement from a brewery called M&B Brewery. Their flutist, Ray Thomas, was such an incredible force to be reckoned with that he was actually nicknamed "The Flute" - no doubt because of his abilities to metaphysically demolish your soul with the ferocity of a flute-shaped sword. Yeah.

Alright, as per usual, I'm going to deviate from the theme of the article. Ukraine's Nokturnal Mortum is not a badass band, despite being technically "heavier" or more "extreme" than any of the aforementioned bands. So why do I say this? Because they are a famous Nazi black metal band. WITH FLUTE. And that ain't cool. You'd think that a band utilizing such a misunderstood instrument could recognize the dangerous errors of holding once-popular false beliefs. But apparently not, because members Knjaz Varggoth, Astargh, Bairoth and keyboardist/flutist Saturious are unrepentant, racist assholes. Oof.