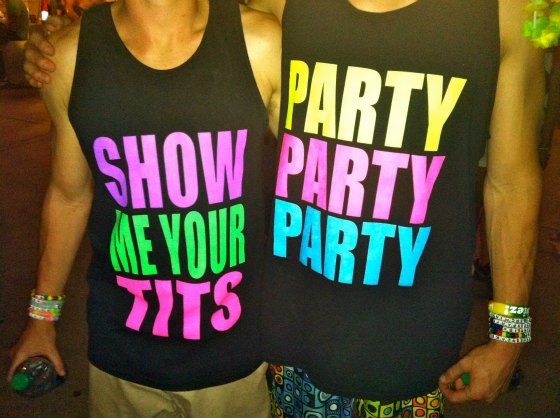 Electric Daisy Carnival was this past weekend in Las Vegas, bringing the EDM generation out en masse to celebrate its love of sensory overstimulation and all things electronic. The scene inside the Las Vegas Motor Speedway, where the festival is being held, was a sight to behold, with fireworks, complex stage productions, lights, carnival rides, lasers, art installations and music on seven stages.

Nothing about this festival is subtle, clothing included. While the look for ladies erred on the side of mostly naked, many of the dudes went with a frat rave look via statement t-shirts. Here, some of the most eyebrow-raising messages spotted at the first day of EDC.

Seems like an assumption, but hey, great point! We're a long way from PLUR right here. Left: "Cool story hoe, now suck my dick." Right: "All I do is fuck and party." Charming! This is legitimately scary!

Yeah. Let us know how many sandwiches you end up with.

Now this one we can get behind!