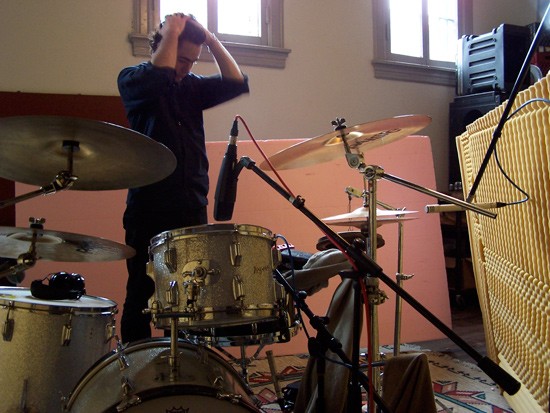 Mic Boshans's take on percussion comes informed by way of jazz and punk, merging subtle accents with hard-edged beats. Approaching the kit with careful precision, Boshans controls the space between hits with a sharp ear, forging a distinct rip regardless of the band.

See also: - Humdrum to Release New EP We Are Electricity This Saturday at Off Broadway - A Pilgrimage to the Church Of Steve Albini: Is He a Dick?

Be it pop or blackened folk-rock, Boshans' beats are unmistakable. As the drummer for both Humdrum and Née, Boshans will bring his genre-bending proclivities to the forefront, with both bands performing this Saturday at Off Broadway (3509 Lemp Avenue; 314-773-3363).

Nearly one year ago, Boshans traveled to Chicago with his group Humdrum to record with Steve Albini. Humdrum isn't strictly an indie or pop band, but the band's choice to record at Electrical Audio might be a puzzling one. Albini's repertoire doesn't exactly cry "easy listening" but Humdrum's collective choice to go with this man, who pushed experimental music in the '80s with Big Black and through the '90s with Shellac, screams "good taste."

Humdrum's new release We Are Electricity will debut this Saturday at a dual release show with Boshans's other group Née. Tower Groove Records will be in full effect as well, pushing their latest split seven-inch series release with Née and Ransom Note. Boshans took a breather from rehearsal to "Fill In The Blank," and sate our curiosities.

I make music because... I HAVE TO. It's in my blood. Making music, especially playing the drums, is where I feel most home and the most alive. It is my most potent form of self expression.

My first band... formed back when I was in the 8th grade at a small Christian school in Maryland Heights. Some friends and I decided to cover Nirvana's "Come As You Are" for the middle school talent show. It seemed like everyone else was doing mediocre choreographed dance and lip syncing to Christian pop songs. It felt pretty rebellious at the time, to be playing electric guitars, and banging on the drums, rattling their cages with some "secular!" grunge rock.

After several different incarnations of the aforementioned band (each with it's own ridiculous name), I met Dan Meehan while I was a junior and he, a senior, in high school. We started playing and recording music together in his mom's basement. We converted half of the basement into a shoddily constructed, fire hazard of a studio, and formed a band with our friends Dan McKenzie and Gareth Schumacher. That band adopted the name Surkranikhan (don't ask) which eventually became the Floating City.

The Floating City was my first serious band. We cut our teeth opening for national touring acts at the Lemp Neighborhood Arts Center and graduated to headlining shows at Mississippi Nights. We put out a couple of records that I'm quite proud of to this day. We toured as much as we could and eventually broke up because life got in the way.

I am quite pleased to say that I am still collaborating with three of the aforementioned individuals as well as our friend Andy Benn whose First Flight Records put out The Floating City's only full length, Entering A Contest. He booked an extensive West Coast tour for us and got us reviewed on national and international blogs. He even booked us on my only international touring excursion where we played with some label-mates in Toronto.

Dan Meehan and I are founding members of Humdrum, and he recently started playing guitar, et cetera with Née. I dare not say how long we've actually been playing music together. Schumacher produced the last Humdrum record, The Arrangement, and then joined the band for a season. His last contribution was recording with Humdrum for the Albini sessions which yielded We Are Electricity. Dan McKenzie created the intense piece of art that became the cover for We Are Electricity. Finally, Andy Benn joined Humdrum very recently to play keys for the us in the absence of Phil Strangman. I've learned the most... by doing. Music is essentially a form of communication. It is a language I've learned almost exclusively through collaboration with my peers. This collaboration is essential to my creative process, so I am eternally grateful for all of the brilliant musicians and song writers that I've had the opportunity to work with. They create the spaces I play in, and in some instances, lend melodies to the words I've written or vice-versa.

The most difficult lesson I've learned... as a drummer is how to listen, to make my drum parts serve the song rather than making me feel cool or important.

Some of my favorite local bands are... Well, that's a long list. Let's see. I am currently quite enamored with Grace Basement's last record Wheel Within A Wheel and I am proud to call Kevin Buckley and Dave Anderson collaborators on The Union Electric's recordings. I am also a huge fan of everything Old Lights. Their records and live shows are an inspiration. The Conformists and So Many Dynamos have been blowing my mind for over ten years now. The Rats and People Motion Picture Orchestra is an incredible gem in this town. Pokey La Farge and his crew are great ambassadors for this fair city. Dave Stone and his collaborators have long been a breath of fresh air on Friday nights at Mangia. Also, I feel I would be remiss not to mention, my favorite local band to die in St. Louis music's recent past, Target Market. Their music was innovative and catchy. They really had a unique voice. I will admit, I have been moved to tears on more than one occasion by their incredibly emotive live shows. Recommended listening: Concealer EP and No Thrills.

I guess this would be a good time to also mention how proud I am to be a part of Née. It's been an exhilarating ride so far, and an inspiring experience playing music with Kristin and David. Now with Dan in the mix, I can't wait to see what happens next.

I've been playing music in this town for the better part of fifteen years and I've never seen this scene so vibrant. I am proud to be from St. Louis and I am super excited about what's going on here.

There are so many bands encompassing a sweeping range of genres and genre defying music. We have good media resources with all of the blogs, papers, zines, radio stations, YouTube channels, et cetera. I'll resist the urge to drop names with one exception. KDHX is doing awesome things for local and independent music in St. Louis! I can't say enough about what an incredible resource they are, or how incredibly fortunate we are to have access to the airwaves that they maintain.

It also bares mention that we have amazing record stores, venues, print makers, studios... You name it. It's here.

The best post-show food in St. Louis... It's a tough call. I'm still trying to figure that out. I am always excited to find out about new late night dining options. City Diner is a favorable option on weekends. However, if I'm playing at the Tap Room, which is a pretty regular occurrence, I eat like a king there! (Side note: Brett Underwood has been putting on amazing shows there and taking great care of local and independent touring bands for as long as I've known him, which is about 8 years at this point. Cheers to him!)

The St. Louis music scene could use more... Hell, let's start with one record label with access to national distribution and the ability to fully fund and promote their releases to national and international audiences. We need to find a way to make extensive touring a financially viable endeavor for more St. Louis bands if we want to make the kind of splash that I think we ought to be making outside of St. Louis. We have lots of cool new labels, let's pool our resources and figure this out!

Follow any of Mic's active bands via their respective websites: Humdrum: http://humdrumband.wordpress.com/ Née: http://www.neemusic.com/ The Union Electric: https://www.facebook.com/theunionelectric The Union Electric just started a Kickstarter campaign. It's worth your time. Take a look.

Do you know a project or band that should be considered for a feature? Drop a line to letters@riverfronttimes.com.