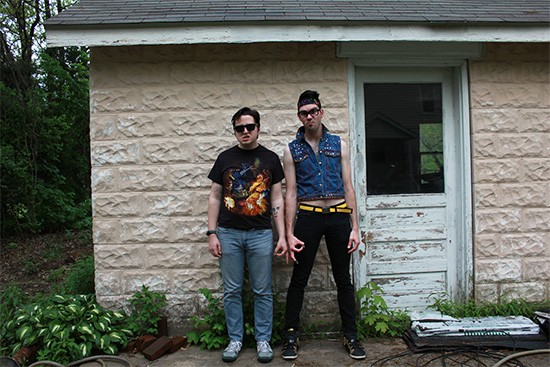 Last year, Corey Goodman and Christopher Eilers, the dynamic duo that make up the self-proclaimed "rock and lol" duo Superfun Yeah Yeah Rocketship, took a fun idea and pitched it to fans via a Kickstarter campaign: their very own comic book. They loved comic books, already had a few comic book-themed songs under their belts, often performed at Star Clipper's events and even had fan-made drawings scribbled of them occasionally. Within two days, they met the $1000 goal and set to work on The Totally Awesome Adventures of Superfun Yeah Yeah Rocketship, set for a release tonight with a party at Foam.

Superfun Yeah Yeah Rocketship's "rock and lol" combines a back track of electro synth pop and occasional chip tunes with frontman Corey Goodman's comedic song lyrics, which range in subject matter from nerd fodder to downtrodden relationships. Guitarist Christopher Eilers (also of the Vanilla Beans and Pat Sajak Assassins) serves as the maestro, strumming corresponding melodies and dropping in the occasional screaming guitar lick to back up Goodman while he works up a sweat on the mic.

As part of the Kickstarter rewards system, Superfun offered up a new digital EP, including comic book-themed tunes and personalized songs for high dollar contributors (look for St. Louis' best music fans Stephen Houldsworth and Graham Matthews in there).

We invited both members of Superfun to fill in the blanks ahead of their comic book release show tonight. See what they had to say below!

What I like most about St. Louis is... the people, places and things! Also, The Fountain on Locust and their awesome bathroom.

I make music because... I gave up on being a professional wrestler.

The best show I ever played was... at the grand opening of a Qdoba. We became the co-sheriffs of Qdoba that night.

My first band was... called "Green Bean Princess," but my father said we couldn't call it that. That's about as far as it went.

My dream line up for a show is... Buck Owens, Billy Joe Shaver and Weezer playing only old b-sides and songs from Raditude and Hurley.

Some of my favorite local bands are... The Vanilla Beans, You're Not Kablamo, Googolplexia, The Dock Ellis Band.

The St. Louis music scene could use... more venues that are also pizza buffets or ice cream buffets.

What I like most about St. Louis is... Brian "Bri-dogg" Fleschute.

I make music because... HOW ELSE IS JAY Z GON SIGN ME?

The best show I ever played was... easily forgettable compared to the one we have on friday at Foam.

My first band was... Milk Has Calcium.

My dream line up for a show is... Superfun Yeah Yeah Rocketship, Pat Sajak Assassins, The Vanilla Beans, and French Montana.

Some of my favorite local bands are... Snooty and the Ratfinks, 3 of 5, I Could Sleep in the Clouds, Scripts n Screwz .

The St. Louis music scene could use... a high five for being sooooo consistently wonderful.

Get a sneak peek preview of the comic on the next pages!

But wait -- there's more! See release show details and another preview on the next page (warning: there's puke)!

Do you know a project or band that should be considered for a feature? Drop a line to fillintheblank@riverfronttimes.com.

Previously from our Fill in the Blank series: - Humdrum - The Blind Eyes