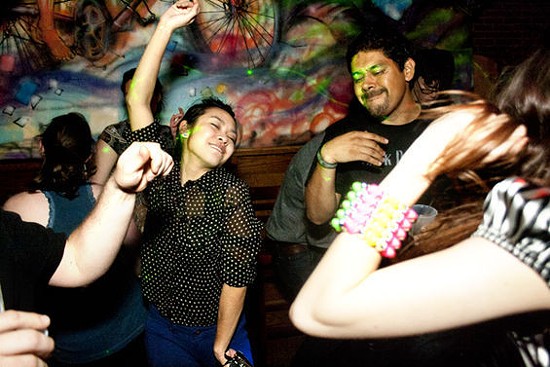 Dancing: It's not just for weekends or home alone in your underwear anymore! Now, St. Louisans can feel unashamed to let their freak flags fly during the daytime with Lunch Beat, a new, free hump-day lunchtime dance party that kicks off at noon on Wednesday, June 19, at HandleBar (4127 Manchester Avenue; 314-652-2212).

"Lunch Beat is an event that started in Sweden and has spread across the world, finally landing in St. Louis," says Andrew Warshauer, a.k.a. DJ Boogieman of Roller Disco fame. "It's got a simple premise: Have a drug-free, alcohol-free, free dance party at lunch time."

Warshauer found out about Lunch Beat from a coworker who resided in Sweden for a time, and then he did further research online. According to the official Lunch Beat website, anyone can start up their own chapter. In fact, 60 have popped up all over the world in the past couple of years, everywhere from New York to Berlin. Only about five registered Lunch Beats exist in the U.S.

The Lunch Beat Manifesto consists of ten simple rules -- kinda like Fight Club but with less punching and more lunching.

1st Rule: If it's your first lunch at Lunch Beat, you have to dance.

2nd Rule: If it's your second, third or fourth time lunch at Lunch Beat, you have to dance.

3rd Rule: If you are getting too tired to actually dance at Lunch Beat, please have your lunch at some other place.

4th Rule: You don't talk about your job at Lunch Beat.

5th Rule: At Lunch Beat everyone present is your dance partner.

6th Rule: Any Lunch Beat is to be no longer than 60 minutes long and set during "lunch time."

7th Rule: Lunch Beat always serves their guests with one DJ set and one takeaway meal.

8th Rule: Water is always served during a Lunch Beat for free.

10th Rule: Lunch Beat can be set up anywhere by anyone, as long as they are announced as public events, are nonprofit arrangements and are directed by this manifesto.

"I hope we get the whole spectrum of people from twentysomething hipsters to doctors, med school students, baristas and blue-collar workers," says Warshauer.

A mixed bag of everyday Joes and Susans cavorting together just for the fun of it? We're for it. Here's some inspiration.

The very first Lunch Beat event in June 2010 had only fourteen attendants. And now chapters all over the world look like this! So, if your coworkers aren't so willing to participate in a Harlem Shake video, ditch the doldrums of the workplace for a minute and bump butts with some strangers over lunch. Then, someday, brag about how that small group became a part of something much bigger.

DJ Boogieman will play primarily funk and disco along with current boogie for the debut Lunch Beat in St. Louis, though he plans to involve other DJs in town over time. The HandleBar will have its usual menu available -- try the borscht, says Warshauer.