Megadeth's Dave Mustaine: Believe It or Not, He's a Humanitarian 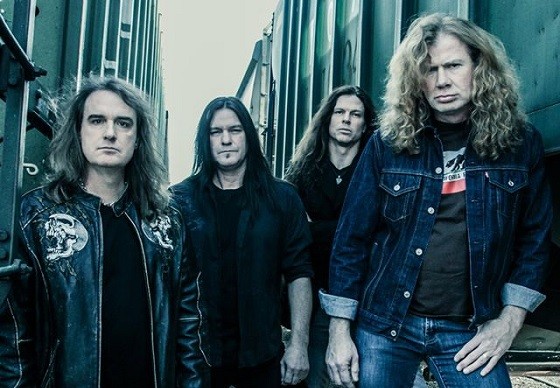 On classic albums such as Peace Sells...But Who's Buying? and Rust in Peace, Megadeth leader Dave Mustaine explored themes such as citizen apathy and Big Brother government. These themes are also in play more than two decades later on Megadeth's newest album, Super Collider, out last week. But the often-outspoken metal icon understands the complacency.

"I don't get angry at all," he says. "I think it just validates what I've been saying all these years. The saddest thing is that people are being told [the Big Brother culture] doesn't exist. I remember when I was a kid and they made us get inoculated in school. That was more along Communist lines than we are living even today. All of the students are getting lined up to get shots, and you're going to do it and like it!"

"This morning I was getting a coffee in a drive-through, and these kids were in front of me dumping bags and bags of trash in the drive-through parking lot and drove off. Is this what we've become? Is our society to the point where you just dump your shit and leave? If so, our planet is not surviving much longer."

It's incidents like that that have fueled him creatively on Super Collider, evidenced on tracks like "Never Turn Your Back," which is inspired by a very personal anecdote.

"I had a friend that used to run a halfway house," Mustaine explains. "He had a box of stuff from someone that had OD'd and passed away. My friend told me to look through this box; he didn't tell me what it was. There was a High Times magazine and a Polaroid of a guy flexing and posing. I asked my friend what it was, and he said, 'It's the dead guy's stuff.' My friend told me he was the kind of guy that will steal your dope and then help you look for it. Everyone has had a friend like that; the type of guy in life that will steal your drugs or your money. The guy that will sleep with your girlfriend and then whisper in your ear, 'I think he's cheating on you.'"

Mustaine says he's trying to do what he can to make the world a better place, to live his life in a more positive manner, despite what he sees as negative forces around him.

"I've tried to stop being a bad influence on people," he says. "I've been through the drugs, the drinking, the chicks, the cars. When you are young and bulletproof, that's cool. But as you live life and start to experience things, you learn to sit back and approach things differently."

He recently funded the opening of a soup kitchen in Port-Au-Prince, Haiti, to help feed orphans and widowed mothers, and he is understandably proud of the effort.

"I've learned that if you live your life and try to help people as much as you can, the laws of the universe will be in your favor," Mustaine says. "By design, we are supposed to help people. At the end of the day, if I was a cowboy, I'd wear the white hat. There was a time where I would have had a black hat. But now, I think it's cooler to help people."