Outside the Casa Loma Ballroom at Iowa and Cherokee, storm sirens echoed their eerie warning to the city: "Take shelter immediately," they cautioned. However, roughly one thousand people -- city and county residents alike -- braved sheets of torrential rain and flash-flooded streets to see Pokey LaFarge play on Friday night.

Inside Casa Loma, three bars on two packed floors were humming with business while Pokey merch flew off the shelves. The line for the women's bathroom echoed the line for people to get in downstairs. When asked after the show, the earliest-arriving attendees said they were unaware of the storm until an aftershock soaked them on the way to their cars.

Openers Mariachi Los Compadres were chosen for their devotion to mariachi music -- the members of Pokey LaFarge are fond of authenticity. This inclusion of a mariachi band appeared to be a welcoming gesture between music communities that, while living side by side, usually only mix on Cinco de Mayo. The Loot Rock Gang, guitar-slinger Mat Wilson's newest project, quickly followed for a rapidly crowding floor. Founded with blues singer Little Rachel, the group recently added Steven Inman on upright bass from Wilson's seminal St. Louis punk band, Nineteen. (If you don't know about the Rum Drum Rambler singer's hardcore past, please look it up.)

By the time Pokey took the stage, savvier fans had discovered the sound was better in the back of the venue, and the air much cooler. (While this writer is fond of the beautiful, sweeping Casa Loma -- my grandparents used to go dancing on that very hardwood floor -- the sound system in the bi-level, bouncy room left something to be desired.) With his usual banter and charm, Pokey LaFarge and his extended band -- Adam Hoskins on guitar, Joey Glynn on bass, Ryan Koenig on harmonica and percussion, and new members Chloe Feoronzo and TJ Muller on clarinet and trumpet, respectively -- pumped up the old-timey jam in style.

I was lucky enough to ride with the band to Nashville on Saturday, for their coming-out party at Jack White's Third Man Records. (I will answer prospective questions quickly: He is nice, and not too tall.) Third Man Records is an interesting blend of Nashville kitsch and the odd style of class we've become accustomed to from Mr. White. The green room is full of large dead animals and swanky Mad Men furniture, and has a really cool, red-tiled, faux-vintage kitchen on one end. You're allowed to smoke inside, but YOU ARE NOT ALLOWED TO TAKE PICTURES. 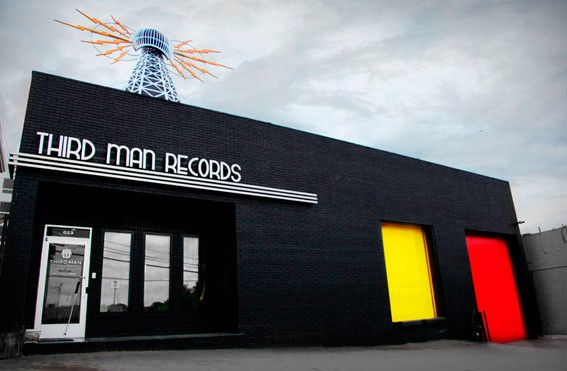 The outside of the venue is decked out in Third Man's signature yellow-and black, and the performance room itself is entirely robin's-egg blue. The far wall curves at the bottom, an infinity wall featured in the music videos and promotions of many of Third Man's projects. Yet the most intriguing thing about the Blue Room is its two glass windows, behind the stage. Men in lab coats (which, I noticed later, whimsically bore the Third Man three-slash insignia) hovered over complicated machinery there as the band sound-checked.

Third Man Records has recently acquired a direct-to-acetate record cutter; and has recently installed their much-publicized 45 recording booth on the premises. They have also set up the full-length version of this machine in the backstage of their Blue Room. During Pokey LaFarge's set, a counter ticked down how much time the band had left on each side of its freshly-pressed record.

It was a treat to see the band in such an intimate venue, after the cavern-like effect of the ballroom the previous evening. One-hundred-fifty people packed shoulder to shoulder, all faintly blue in the stage lights. Both record releases were all-ages affairs, and teens and children could be spotted in the crowd. These fans of Pokey LaFarge knew every word, every rhythm, every break from his albums Riverboat Soul and Middle of Everywhere. The record cut in the back room would hold their voices as much as his.

Pokey kept one eye on the clock, and the band's rollicking, growly cover of "Garbage Man" brought the initial set to a close with a sparse two seconds to go. "We're done recording, now we can play as long as we want," Pokey told the crowd, and brought the house down with further renditions of "La La Blues," "Drinkin' Whiskey Tonight," "Born in St. Louis," and all of the other hits that have made the group Americana sweethearts both at home and abroad.

"They just don't wanna stop playing," I heard the stage manager mention to a Third Man staffer. "I told em to go as long as they want, and they are."