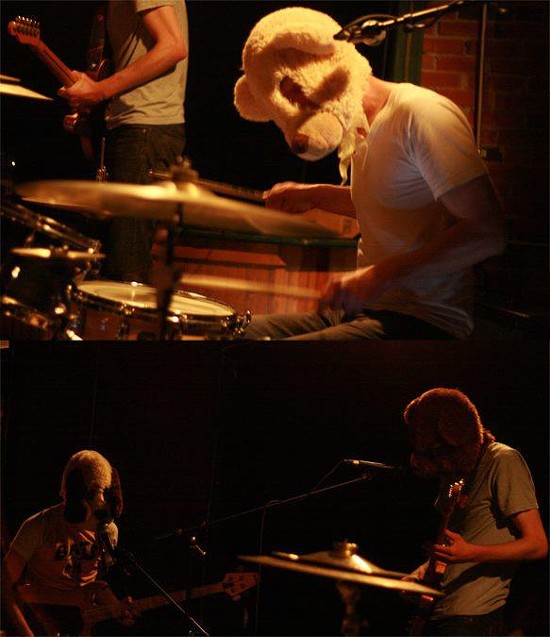 Darin Gray presently operates in the realms of free improvisation, jazz, noise and so on. Watching the bassist in person is a reminder of Gray's hardcore punk roots as a member of abrasive proto-math rock band The Dazzling Killmen. He is a frighteningly cathartic performer, feeding off the energy of his collaborators and pushing his own abilities to violent extremes. Gray is an expert of prepared bass, the practice of conjuring textures from his instrument using cymbals, sticks, trumpet mouthpieces and any other device that makes sound. Often, his techniques are multi-faceted, with a single action causing a cacophony of sympathetic vibrations like an instrument designed by Rube Goldberg in collaboration with Dr. Seuss. At these times, the scariest aspect of Darin Gray's performance is the thought of what other sonic possibilities are lurking through his skull. -Ryan Wasoba

Eric Hall You could probably fill your iPod with nothing but solo releases from Eric Hall and still run out of room before you got to his collaborative work with other musicians. Last year he was put in charge of curating a massive installment of musical pairings at Laumeier Sculpture Park - and he actually pulled it off. That alone demands attention, but it wasn't enough for Eric Hall. He is constantly working on his craft - not so much for the fans as for his own sanity. It is pure, and it is good, but Hall's fans already know that. This is brilliant music for eager ears. -Kenny Snarzyk

Our composition teachers taught us that all writing is really revision, and Ou Où is a musical representation of that little koan. Travis Bursik and Patrick Weston make up this instrumental duo, and the pair set about building a phrase or pattern, modulating it within an inch of its life, and then starting from scratch. The aural evidence on the band's series of EPs (including this year's cassette release Geocities) reveals some songs that build to a frenzy and some songs that drip and decay. -Christian Schaeffer

The elusive, brain-bending Yowie hides away in St. Louis to build on singular forms of progressive music. Yowie plays a dense foreign language through two guitars which communicate in an angry, six-string banter through strictly scattered drums. This power trio speaks in alien code with founding member Defenestrator playing the part of percussive conductor. Each song comes densely packed with rare repetitions: a series of guitar riffs pass like clever one-liners with unbridled speed. The shred level of death metal blends with poly-rhythmic jazz in an oppressive mix of experimental rock. Yowie's tenure includes a recent European tour and two full-length albums through the prolific Skin Graft Records. -Joseph Hess