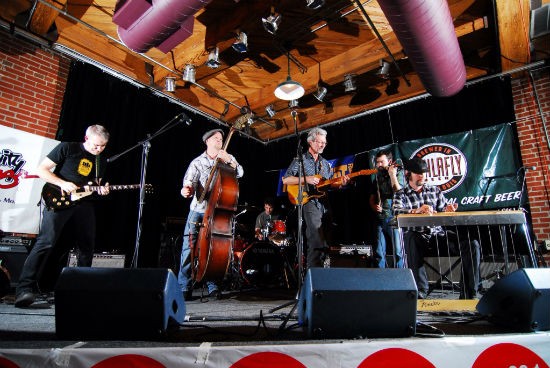 There are bands in this town that hem and haw around the "country" appellation, with a fiddle solo here or a "Yee-haw!" there -- and then there's Colonel Ford. The members of this quintet honed their Bakersfield bona fides via years of gigging with a variety of acts, and the combined effort has the worn-leather feel of an old baseball mitt. Jay Farrar has been known to sit in on pedal steel from time to time, but he'd be the first to admit that he's a relative rookie among the ranks. (He snagged Telecaster master Gary Hunt to join Son Volt on its tour behind Honky Tonk.) That said, St. Louisans are plenty lucky to salute Colonel Ford on smaller stages most weeks. -Christian Schaeffer

Led by singer and songwriter Eric Sargent, the Dive Poets have become the not-quite-elder statesmen of St. Louis' Americana scene. Since forming in 2006, the band has expanded its numbers and sound, adding keyboards and fiddle. As a result, the ensemble can play to its jangle strengths as easily as it can play to the honky-tonk stories implied by its name. A new album should be due out later this year, and if the first single, "Some Great War," is any indication, the Poets have managed to mature without losing their collective freewheeling, twangy instinct. -Roy Kasten

If you're looking for heartwarming tales of hope and small-town American dreams, don't look at Jack Grelle and the Johnson Family Band. The group's latest, self-titled release starts out with a question: "A broken guitar and a blind dog, what's a man to do?" It's the kind of line John Prine might have written in a darker moment, and Grelle sings it, as he does every line, with deadpan wit. But Grelle's music isn't some gothic freak show. He mixes in honky tonk and old-time blues into his brand of Americana, and the graceful sounds of pedal steel and harmonica provide just the tonic to the honest, hard-luck stories he spins. -Roy Kasten

Since 2005 Old Capital Square Dance Club has been writing and performing rock, folk and country songs with an Americana charm. Headed by key members Jesse McClary and Zach Anderson, this six-piece band is doing its best to keep audiences entertained -- and having a great time doing it. With its latest CD recorded appropriately by Jason McEntire at Sawhorse Studios, the Square has released its finest work to date. Best paired with cheap bourbon, as opposed to a fine Cognac, BTW: This stuff's all about hard work and easy living. -Kenny Snarzyk

Like the Decemberists' Colin Meloy or Okkervil River's Will Sheff before her, Lacie Mangels wields her vocabulary and poetic vision like a scalpel, using uncommon verbiage to get at universal truths. Her words and her plainspoken voice are at the center of Prairie Rehab, a twangy quartet that uses country music more as a suggestion than as a dictum. On the group's second LP, this year's Weights & Measures, gentle and nuanced melodies prop up Mangels' equally gentle and nuanced delivery, with Scott Swartz's pedal steel adding vibrant color enhancements. -Christian Schaeffer