[Editor's note: In the time since this post was published this morning, Zach Sobiech has succumbed to his illness. May he rest in peace, and may his family find comfort in these sad times.]

Anyone who has either been to a wedding or a funeral in their life knows from that fortunate/unfortunate event (or vice versa, depending on your opinion on the betrothed/deposed) is familiar with Ecclesiastes 3:8. For the non-Tebows out there, that's the one that '60s band the Birds made into an old commercial for Time-Life magazines: There is a time to reap, a time to sow, a time to love, a time to hate, etc. Basically, that there is an appropriate time for everything.

I never thought I'd be saying this, but there is even a time to stop taking shots at Jason Mraz.

Devoted readers of this space -- and thanks to both of you, by the way -- know that in virtually every one of my columns, I make it a point to throw in a snarky comment about Mraz. Let me explain why, in terms as benign as possible.

I care deeply about music. I believe music is important. I find merit in artists who are inventive, who take chances, who are striving to create something I have never heard before. Something that grabs me by the proverbial lapels and forces me to pay attention. I have always found Jason Mraz to be the living antithesis of this sentiment. I find his music to be extremely lazy and boring, his lyrics simple and saccharine and his listeners to be people who have given up on the joy and challenge of discovering new music, instead electing to be spoon-fed something easy. Mraz's fans are the kind of people who watch absurd "reality" dating competitions like The Bachelor instead of a challenging drama like Mad Men, or keep up with the reprehensible Kardashians instead of The Americans.

I don't feel bad about being harsh on Mraz, by the way -- he is a well-compensated professional, and absorbing slings and arrows from critics is part of the job description. However, I saw something last week that made me decide to find a new target, as there is certainly no shortage of musicians who make music worthy of derision. 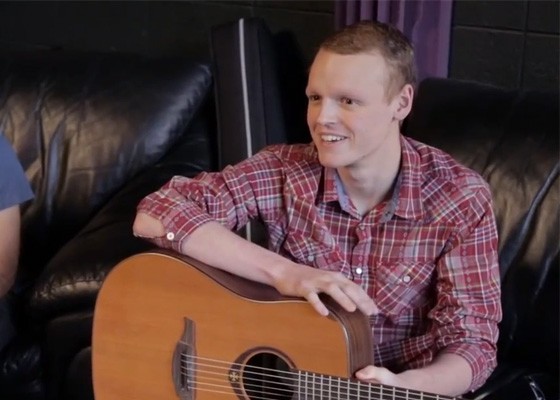 Eighteen-year-old Zach Sobiech of Lakeland, Minnesota, is suffering has passed away from osteosarcoma, a painful form of bone cancer, after he was given one year to live in May of 2012 . An aspiring musician, Sobiech wrote and performed a video for "Clouds" as a way to say goodbye to his friends and family. Three million YouTube views later, it inspired a tribute video where a litany of celebrities lip-synch and express their love and concern for this brave young man. Introduced by the nefarious Walter White (nee Bryan Cranston), the video features Chris Pratt, Ashley Tisdale, Sarah Silverman, Phillip Phillips and much of the cast of The Office. Mraz then looks straight into the camera and closes it out with a direct message to Sobiech: "Thank you, Zach. You've written a great song, dude. It's a real pleasure to sing it, and sing it with you. Thank you."

Continue to page two for more, including the heartwarming video in question.

There is so much evil in the world today that it is incumbent upon us to celebrate the good when we see it. In the music industry, an unrepentant, loutish thug like Chris Brown sells millions of records, as do vacuous tarts like Ke$ha and Nicki Minaj. Not enough people put real thought into the kind of person they are supporting with their musical purchases. Along with all the others in this touching video, Jason Mraz did a very good thing to help buoy the spirits of a dying teenage boy and raise money for cancer, and for that he has earned my respect and admiration. While I won't be buying any of his music or attending any of his concerts, I will stop deriding those who do.

So hats off to you, Mr. Mraz -- preferably the douchey one that is almost certainly on your head right now (whoops, sorry, last one I swear). You may rest easy for the time being, knowing this freelance online writer has removed you from the top of his hit list.

John Mayer, you're up.