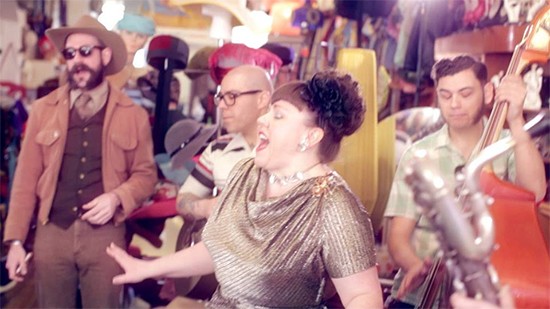 It's beautiful out -- what more do ya need? Get out there and see some stuff. There are plenty of excuses to hang out outside including Harvest Sessions and the Webster Grooves Festival. Check out our Out Every Night post from earlier this week to read about great shows over the next few days including Mvstermind's CD Release, Little Big Bangs, the Bo-Keys, Eagles of Death Metal and Shiny Ribs. More after the jump.

REO Speedwagon w/ Styx, Ted Nugent, Mama's Pride @ Verizon Wireless Ampitheater 6 p.m. | $31-$218 Put on your favorite old Trans-Am t-shirt (no, not the one with the sleeves on it) and get blasted drunk in the sun! Fire your crossbows and automatic rifles into the air to celebrate the Nuge's set. After all, it's the American way! (DH)

Wind & Fire CD Release @ The Chapel 7 p.m. | $10-$15 I went to read more about this, since it is a CD release, and it's pretty cool. Mark Holland & N. Sott Robinson use instrumentation from around the world, including tons of percussion and flute, resulting in what sounds like remarkably like public radio bumper music. Neat! (DH)

The Steve Strayhorn Celebration to Benefit the American Cancer Society w/ Mike and Nick Swedo, Rusty Van Gogh, Choozey Muthers, Brian Clark, Planet Boogie, Full Moon, Gypsy Jones, Uncle Albert @ Plush 2 p.m. | $10 Cancer sucks a fat one and we all know it. Now put your money where you mouth is about it, and catch a great show. Good cause, good cause! (DH)