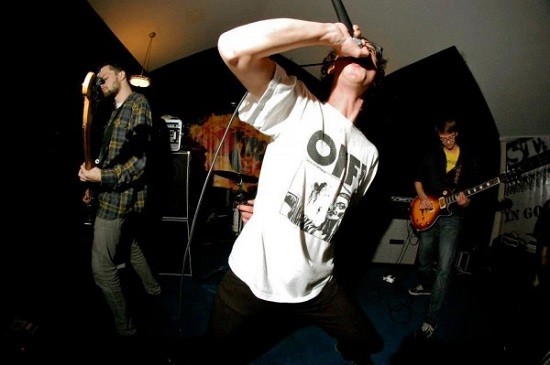 Not all things that come from the St. Charles area are homogenized and soul-less. Take Strangers Now, for example. I went out to a Halloween show at one of the members' houses out there last year: It was chock full of un-jaded, fresh-faced kids who I barely recognized. This was somewhat unheard of, a group of kids at a show who don't have nearly the levels of "damaged goods" as the upperclass-men/womyn punx. It reminded me of how growing up in the county (North, West, or South...or East, if you count Illinois) can brew up an anxious cauldron full of boredom-based, sub-culture exploring, cop-hating scribbled lyrics and furious riffs. This band seems to embody all of this and is actually making its way out of suburban purgatory to tour the country, with freshly pressed wax in-hand.

Strangers Now recently received its latest effort (a split 10" with Champaign, IL's Etma) from Skeletal Lightning Records. Singer Ben Teter let me know that the band is rarin' to bring their "If American Nightmare sounded more punk" sound to the road.

"We're doing a six day tour at the end of May," he says. "Four of the dates will be with Enta. We're starting in Champaign-Urbana. From there we're heading to Milwaukee, Chesterton Indiana, Pittsburgh, Columbus Ohio, and then playing the official record release show at the Lemp Neighborhood Arts Center here in St. Louis."

More than most other bands, after somewhat of a falling out with the older kids, Strangers Now have kept the hardcore community tied to Lemp, bringing plenty of out-of-town acts to the long-running show/art space. The band has put true DIY spirit into its three years of high-energy shows, and three releases (good year to record ratio) and faced some grown-up realities. The band lost bassist David Green (III) to the armed forces (the thing, not a band) last year. Teter, reminding me of this fact:

"MATT BOSWELL GETS NO LOVE! Uh...I mean, David parted ways a while ago to take care of some manly duties. We now have Matt playing bass for us. He's not as cool as David, but he works."

Despite the loss of one of the coolest dudes in town, Strangers Now's vicious combination of work ethic, potential and youth seems to be opening plenty of doors for its upcoming plans.

"We've been asked by a few different bands to tour with, and a couple others have expressed interest in splits. We still haven't committed to anything yet. But chances are we'll be doing another tour later this year as well as releasing a seven inch, either as a split or just our music."

Notes: Teter on fashion VS. function, "Our drummer Alex has been known to wear a jock strap as underwear. "