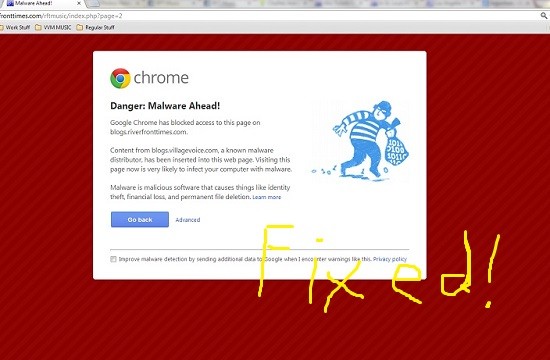 You may have noticed over the weekend, starting on Thursday, that RFT Music was largely inaccessible. Users of Google Chrome, Safari, Firefox and likely others were blocked by warnings of malware, looking very similar, if not identical, to the one you see above.

Obviously, this was frustrating for us, because we had some great articles published online, with no one able to read them. Here's what you missed:

Kendrick Lamar Brings the House Down at the Chaifetz Arena 4/17/13: Review and Setlist The newly crowned "King of West Coast Hip-Hop" (so sayeth Dr. Dre, Snoop Dogg and the Game) played to a packed crowd at the Chaifetz on Wednesday night. Here is our complete review, with setlist.

Jay Chandrasekhar Talks Writing Super Troopers, Starting Up In Standup Comedy Funnyman Jay Chandrasekhar did an interview with us to preview his show at the Firebird Saturday night. Chandrasekhar proved a thoughtful and entertaining interviewee, and not everything fit in the paper. Here's what was left on the cutting room floor.

Mykki Blanco at the Demo, 04/18/13: Review, Photos and Setlist Gender-shifting rapper Mykki Blanco performed at the Demo on Thursday night, captivating the audience and assuring them that the next stop through town will be a a much larger venue. Based on her career's upward trajectory and stellar performance at this show, we're guessing that's a safe prediction.

Local Record Store Day Wax from Tim Rakel's Extension Chord Records, Cassie Morgan and More Record Store Day has come and gone, of course, but guess what? You can still purchase these excellent, all-local releases at your local vinyl dealers, as well as the shows of the players involved. Don't miss out on some great local releases!

Doing Drugs This Weekend? Here's How to Not Get Caught Everyone's favorite pot holiday has come and gone now as well, but these tips can still completely save your ass if you are approached by a police officer and you have something on you that you shouldn't. Recommended reading for sure.

In St. Louis Music, Life Is a Never-Ending Conflict of Interests The inimitable Ryan Wasoba discusses the extremely insular nature of St. Louis' music scene, and how multitasking can put one in a minefield of concerns for integrity....and why we shouldn't care about any of that so much.

A Free Jazz After Party: Weird Out With Chikamorachi The show is over but the band continues: RFT Music's Joseph Hess talks to Darin Gray about the experimental jazz-freakout that is Chikamorachi.

Brillz Talks New Album and Twitter Fighting with Azelia Banks: "She Did It to Herself" Another show that came and went already! Still, check out our interview with Brillz, wherein he discusses his upcoming album, Twitter wars and unconventional headgear.

Anyway, things seem to be running smoothly again, so we will take you back to your regularly scheduled programming. Sorry for any issues!