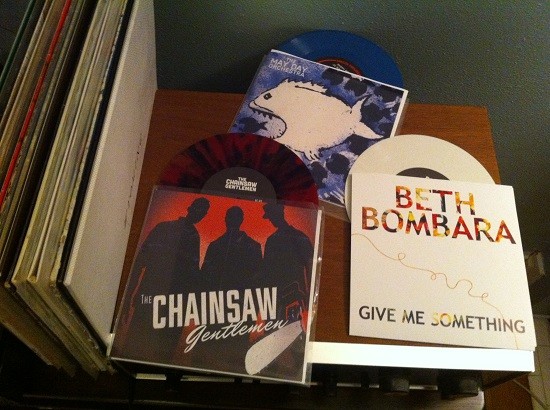 It's one of the perks of this gig that, sometimes, Record Store Day comes a little bit early. The Vinyl Fairy has been making stops at my doorstep and leaving advances of this weekend's local wax offerings, which are every bit as exciting as, oh, the 1,000-quantity Todd Rundgren picture discs (or what have you) that will have folks lining up on the sidewalk in the wee small hours.

Tim Rakel, of the May Day Orchestra and Union Electric, has masterminded a series of seven-inch records that show the breadth of his own musical taste while giving space for a few like-minded songwriters. In addition, Cassie Morgan makes her first release since 2010's Weathered Hands, Weary Eyes with a game-changing single. Each of these 45s will be available at your local independent record store as of Saturday, April 20 (see here for more information).

As if last year's epochal double LP compilation from Tower Groove Records didn't set the bar high enough for local vinyl releases, Rakel has taken it upon himself to use Record Store Day as a launch pad for his own imprint, Extension Chord Records. He'll be shepherding out the label's first two titles this weekend: a split by Beth Bombara and Town Cars, Melinda Cooper's new outfit, as well as the debut release by the Chainsaw Gentleman, which finds Rakel squaring off with Rusty Nail's Chad Ross and Alvan Caby. That seven-inch hints at a stripped-down approach to Ross and Caby's more Irish folk-fueled raucousness - the Caby-penned "Rag & Bone Man" cribs from Yeats in a mournful yet strident dirge, and Rakel's "A Sort of Buccaneer" returns to the accordion-driven shanties he touched on in the days of his old act, Bad Folk.

The Bombara/Town Cars split is more immediately tuneful, but far from easy-going. Recorded simply but effectively with her husband Kit Hamon, Bombara's "Give Me Something" is more electrically charged than some of her more recent, rootsier songs; comparisons to Fleetwood Mac have already surfaced, and here you can (almost) hear them saying that they would never break the chain.

For Cooper's Town Cars, she keeps an open-door policy for her collaborators: Bombara guests on the driving "Paul's Party," while Middle Class Fashion's Jenn Malzone offers a demo version of "Everything," with Cooper supporting on guitar in place of Malzone's trusty piano.

Alongside these Extension Chord releases, Rakel's other outfits Union Electric and the May Day Orchestra will each release seven-inches, as will Tenement Ruth, who breaks a five-year silence with some long-awaited new music. These missives come from California's Rankoutsider Records, which has been releasing Rakel's music for the past few years. (All involved bands will celebrate with a release show at Off Broadway on Saturday night. $5 gets you in.) Cassie Morgan will celebrate Record Store Day with her first new release in three years, the single "A Day Longer" b/w "Wake Up." Recorded with former St. Louisan Joey Lemon in Wichita, Kansas, the release is Morgan's first foray into more electric, rhythm-driven songs. The A-side is built around shimmering arpeggios from an electric piano and accented with supportive guitar lines, while the B-side builds to a steady thrum. Together, these songs establish a step outside the hushed folk music of Morgan's first two releases and suggest a step forward.

So while you're queued up for the false economy of Record Store Day's limited editions and needlessly reissued platters, break off a few dollars for local artists working to keep vinyl vibrant.

(The peerless I Went to a Show has streams of all the Extension Chord and Rankoutsider offerings, alongside a handy run-down of the Record Store Day schedule. KDHX has a stream and download for Morgan's "Wake Up.")