Editor: Tef Poe is an artist from St. Louis city. Through powerful imagery and complicated honesty, he has earned a reputation as one of the best rappers telling the story of St. Louis, which is about much more than one place. Poe has been featured in music publications such as XXL and Urb Magazine. His project The Hero Killer was released on January 21 and will be followed up by a full-length with DJ Burn One entitled Cheer For the Villain. Follow him on twitter @tefpoe. Get The Hero Killer here.

DJ Mahf and Steddy P are members of the Indyground collective. For those who are newly tuned in to the movement, this an indie hip-hop label based in Missouri, mirroring the likes of Strange Music in terms of potential and growth projection. Despite the lofty comparisons, Indyground has developed a sound of its own and has anchored its roots on the backs of some very solid St. Louis and Kansas City musicians. They are allies with trustworthy engineers and videographers from the esteemed and well-respected Suburban Pro Studios (shoutout to Mathew Sawicki). This is a completely DIY movement built on talent and old-fashioned hard work. Indyground has roots and fans in St. Louis, Kansas City and Columbia -- this makes it one of the only legitimate indie hip-hop movements with fans in these three major Missouri cities.

The label's most notable act to date would probably be the MCSteddy P. He has collaborated with some of the best MC's in the Midwest, touring nearly every region in the United States. His partner in crime is DJ Mahf, a St. Louis legend on the wheels of steel and no stranger to large crowds himself. Mahf most recently rocked the turntables at the Superbowl and brings a built in fanbase of true music lovers to the table.

Mahf and Steddy P recently ventured into Canada with their stage show as the opening act for Master Ace. When I heard this news I jumped for joy, because I think this is an amazing feat for a collective of local hip-hop musicians to accomplish. I reached out to Steddy P to obtain some info about their run in Canada. I wanted to write about this journey, but I knew no one could quite describe it like the people who lived it, so DJ Mahf decided to submit their tour log to us and allow us all to part take in this journey with them. This an amazing upfront and personal look into the lives of two St. Louis-based musicians as they do their first performance on the Canadian turf. I believe they did two shows in Canada, and according to the convo between myself and Steddy, things went overwhelming well. I hope you enjoy the tour log and hopefully become even bigger fans of the movement they are building. Indyground all day. 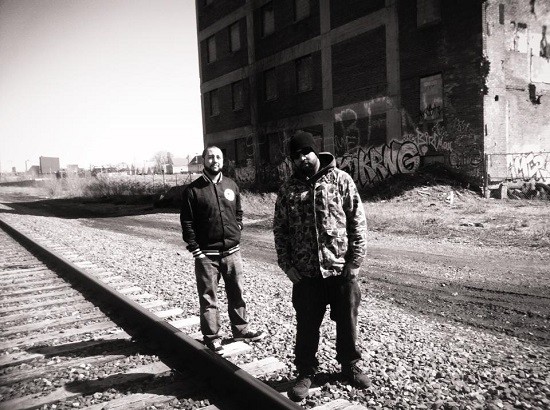 Steddy P and I have been out on the road for the last two weeks, doing shows across the Midwest and Northeast. After our show last Friday night in Buffalo, NY we made our first venture out of the states into Canada.

Last fall we did an extensive tour for our mixtape/EP While You Were Sleeping 2: End of the World Party. Part of our routing had us join forces with Blueprint of Rhymesayers on his Deleted Scenes Tour. His opening act was the MC/producer duo Mad Dukez (Buffalo) and Fresh Kils (Toronto). We ended up hitting it off with Dukez and Kils, and for our spring dates in their region we were able to link on some shows. Saturday evening we made the drive from Buffalo to border check. After a series of questions by immigration we were allowed to enter into Canada.

That night Mad Dukez and Fresh Kils landed an opening slot for Masta Ace and Wordsworth at the Casbah in Hamilton, Ontario. As we were waiting to get into the venue, I was immediately shocked at the line going down the block. Most golden-era hip-hop artists aren't drawing these type of crowds back home in United States. A number of solid opening acts from surrounding areas kicked the night off and the crowd was responsive and energetic from the jump. Dukez and Kils were the last of the local openers to take the stage. Their live show is one of the best I've seen in recent memory: Kils in the background doing all live MPC routines with Mad Dukez's solid delivery, stage presence and sing-along hooks all made for a memorable performance.

On their last song they invited Steddy P and I to join them. Kils fired up the beat for "Worldwide" off their new EP and Dukez launched into his verse. I had to jump on the house DJ's gear and use whatever samples I could find on his laptop so I made due, providing scratches on the hook and outro. Steddy P followed with a crazy freestyle that had three or four moments of "Oohs" and screams from the crowd on certain punch lines. The crowd went nuts, and the set concluded on a high note. Wordsworth was up next and put on a solid set with a lot of freestyle and crowd participation elements. Masta Ace took the stage and performed from his extensive catalog of tunes dating back to 88' Juice Crew.

Sunday we drove into Toronto and spent the day exploring the city, hitting up some sneaker spots, comic-book stores, and eating some amazing food. We ended up at Fresh Kils' recording studio, the Kilzone, and Steddy P and Mad Dukez knocked out a collabo in less than two hours. Been waiting for those two to work together. That night was the tour closer for Dukez and Kils at 3030. After soundcheck, we were approached by Sandeep Dhanjani of KingOfTheDot.com. He wanted our input on a mobile app that he was designing to aid MCs in writing songs. Steddy P and Mad Dukez provided him with some useful advice and it was a really interesting concept. Sandeep exchanged info with us and said he would be in contact with us about Beta testing the software when it was ready. Looking forward to seeing how that plays out.

Steddy and I kicked off the show doing our new tour set with a variety of songs from our last couple projects. One thing I noticed is that we had their full attention. Everyone in the crowd hung on to every word and clapped after every song. I was really happy with our performance and the audience showed us a lot of love. We went into the crowd, CDs in hand, and interacted with a number of hip hop fans, artists, and some local radio hosts. People were asking Steddy questions about different lyrics in his songs and I had a number of people commenting on my turntable skills. I heard a lot of "we don't see DJs scratching and mixing at hip-hop shows anymore." One thing I noticed about everyone in Toronto is how positive, upbeat and friendly they were. Really no ego even from the other musicians we encountered. Definitely an infectious vibe. Shad, one of my favorite Canadian hip hop artists, was even in attendance. Dukez and Kils did their final performance of their tour and killed it as always.

We made some really great contacts and got a taste of what the Canadian hip hop landscape has to offer. It was not only inspiring but really refreshing. We are already in talks about heading back their on our fall tour so hopefully I'll be able to have some more to report on down the road.