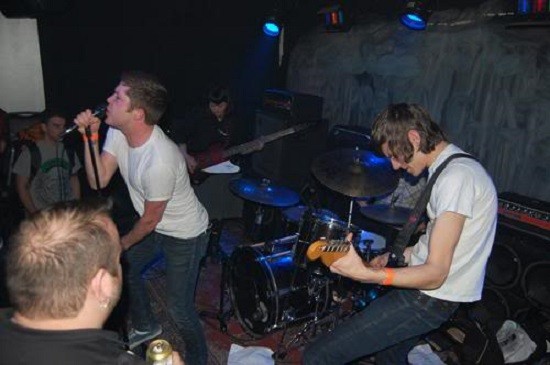 St. Louis-Minneapolis hybrid Voight-Kampff has moved up the big(ger) leagues of the DIY realm. It's just been announced that the band is the newest addition to one of Canada's most successful/relevant DIY labels, Deranged Records (home to bands like Culo, No Class, Wild Child, Brain Tumors, White Lung, Career Suicide and formerly Fucked Up -- among many others). The post/gloom punk band has finally gotten a break (har har) after previous label troubles, a name change (formerly Run Down), and traveling back and forth between the two cities since 2005. Joe Sulier -- frontman/keeper of the haunting and at times even Ian Curtis-esque vocals -- seems anxiously excited.

"Now that we've got this new record in the works for Deranged, there's definitely more pressure and obligation to play more than one show a year, which I think we're really looking forward to. This summer should see a lot more from us on the live end."

Since its inception, Voight Kampff has only been playing in town once or twice a year. Both St. Louis and Minneapolis have their own line-ups of the band. Team VK-STL consists of well-honed basement veterans from the Humanoids, Tone Rodent and Doom Town. Minneapolis-based guitarist Colin Swanson-White, of former Formaldehyde Junkies infamy, recently made the trek in August to play his "stuck in your head for days" lead guitar riffs for the band at a basement show with Canada's Nu Sensae. It was well attended, intense and fun, and with this strike of luck, we will get to see the band all get sweaty at us even more often.

The resume of former band members is extensive and impressive. One might think a hook-up with the right people came through the Breaks or FJ's old label buddies. Sulier is quite to refute these allegations.

"I've heard people try to infer that we landed this label simply because we have connections," he says. "Others have wondered why us, instead of any of the more active bands in St. Louis. That's sort of a St. Louis mentality. The bottom line is, we're not a St. Louis band. I live here, but I certainly don't have any sense of pride towards it. We've been working on this band for seven plus years at this point, and it's rad that someone finally took notice and is taking a chance on us."

This isn't just a fluke, its is the result of years of hard work, long distances, and good luck. This first record will not be the only one with Deranged's seal of approval either, according to the Sulier.

"Our first full-length is about to be re-released on a vinyl LP. Its a split release between Deranged and Rock Bottom Records," he explains. "After that will be our second LP, hopefully by the end of the year. We're writing it right now and will also be on Deranged."

"We're going to try to record the new record in Toronto with Jonah Falco of Fucked Up, and we're also looking to shoot a video at some point this year. We have lots of plans that aren't easy to organize and accomplish since we live in different parts of the country."

Notes: Sulier on his music writing partner/BFF to the north: "Colin is a really awkward kisser, but it's probably largely due to the fact that he's about 3 feet taller than me. Doesn't make for a very comfortable delivery."

Check out the song "The Great White North" by the band, below.