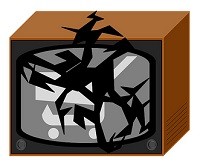 Most people who meet me learn within about 30 minutes that I'm in a state of constant agony. Not because of some sort of tragic childhood or traumatic physical ailment, but because I have television commercials circa 1987 to 2000 stuck in my head at all times. The word "bucket" triggers the song about the children's toy, Mr. Bucket, to play in my head. The term "crossfire" sparks that shrieking hair-metal song for the children's toy of the same name.

Because misery loves company, I've compiled a list of sixteen gross offenders that have used popular songs and altered their lyrics to fit advertising campaigns. Try and make it through each one without head-butting your computer, and be grateful that I left out Christmas songs so that you don't end up absorbing the Fruity Pebbles version of "Deck the Halls."

16. McDonald's - "Do You Believe in Magic" by The Lovin' Spoonful

The uploader of this video, "PeeToons," actually puts it best: "Nasty McDonald's ad with children singing a horrible song. Ronald sings, too. It's awful. Source: Crappy VHS!" Just to let you know, the Lovin' Spoonful is still around, in case you feel like dropping by a show to yell "Play the fucking McDonald's song!" until you are ejected from the coffee shop.

15. Dr Pepper - "Bad Case of Loving You" by Robert Palmer

This website doesn't allow embeds, so you'll have to click here to enjoy this gem. This guy dropped his budding orchestra career and got really screwed up on Dr Pepper. Have fun hearing a magical xylophone for the rest of your life whenever the original version comes on.

14. Pepsi - "California Sun" by the Rivieras

So, alright -- it didn't add the lyrics. But now when I hear this surf anthem all I can think of is that arm motion and "Pepsi -- gotta have it!"

I tried to eat all of the hair off of my arms after my brain broke, upon seeing that little girl in front of the pond do the Pulp Fiction dance.

12. Barbie Rollerblade - "I Get Around" by the Beach Boys

I can't find the actual commercial for this product, but I will recite the painful lyrics that have crystallized on the back of my skull. Play the Beach Boys song, and replace the lyrics with the following:

Well she's a real cool girl and she loves to skate With her rockin' ponytail and her real Rollerblades She gets arouuuuuuund (she's a cool girl, really loves to play) All over townnnnnnnn (no one can believe it when she's cruisin' your way)

There is nothing anyone can say or do to ever fix this.

An old hobo song butchered by a wuss-rock pioneer in the name of factory-farmed poultry. A friend of a friend claims to have shoved Darius Rucker's toothbrush up his ass at a party at his house. Apparently he put the toothbrush back where he found it in the bathroom. At least the commercial features a woman using a purple onion ring as a hula-hoop.

The premise of the commercial is bonkers - a giant alligator in a sweater vest awaits you after a carnival barker alligator ushers you into a deranged mini-golf course. The product? Shove balls in an alligator's mouth and watch as he craps them back at your children. Sorry, Ireland.

Another surf song defiled. Watch as white children manipulate a real Inuit into moving marbles for them so they don't...uh...kill...penguins? Glad they threw that last line in about the product being "cool."

This is another that won't embed, so check out the video here. "Whip It" has also been used in commercials for Gateway Commercials, Ziploc bags, Twix candy and Pringles. I think someone tried to criticize Devo for this until Mark Mothersbaugh claimed he licensed it because he thought it was weird and funny. He also evidently called its 2005 reunion the "2005 Raping the Fanbase Tour," which may give you some perspective on the fella.

6. Maxwell House - "Our House" by Madness

I'm not sure if I'm more disappointed that they didn't put in a creative lyric about child slavery in the coffee industry or that a band called "Madness" created anything but thrash metal.

5. Pizza Hut - "These Boots" by Nancy Sinatra (as interpreted by Jessica Simpson)

The kid seems to pass out at the end of the video, which is about what any person with at least three working ventricles does after consuming anything from Pizza Hut.

I couldn't find a clip of this actual commercial, but Papa John's turned the '80s anthem into "We Got the Meats" to promote MEAT PIZZA. Above is a video of one of the Go-Go's founders, Jane Wiedlin, doing some PETA publicity stunt. I can't figure out which one is more punk rock -- animal rights stunts or embracing sloppy pizza.

Thankfully, Bobby Darin died before this aired. That also means he never got to see one of the terrifying MacTonite statues that graced a few lucky McDonald's locations. There was one the next town over from where I grew up. The location also used those bank teller tubes to deliver your food to you at your car across the parking lot. I tried sending them a letter asking them how they send the drinks, but the server at Applebee's refused to ask his manager if I could borrow the fax machine.

2. I Can't Believe It's Not Butter - "Turn the Beat Around" by Vicki Sue Robinson

Every person in this video is now in a Stone Temple Pilots cover band. If that video didn't mess you up, here is part of a college essay about Mountain Dew ads. See you in Hell.