More Than a Missing Link: Widowspeak and the Dear Records Connection

In this week's print feature, Widowspeak lead singer/songwriter Molly Hamilton spoke both about Almanac, her band's excellent new album, and the band's Pacific Northwest roots. Hamilton is from Tacoma, as is current bassist Dylan Treleven. Original Widowspeak drummer Michael Stasiak grew up in Lakewood, Washington. Musically speaking, the City of Destiny is often overshadowed by its neighbors in Seattle and Olympia, but it has its own proud musical heritage. In the 1960s, the Wailers and Sonics helped paved the way for half a century of punk and garage rock. Instrumental surf kings the Ventures, known for "Walk Don't Run" and the original Hawaii Five-O theme, originated in Tacoma's nontropical environs. More recently, Girl Trouble has kept alive the original Sonics/Wailers spirit with its garage-surf ditties and onstage abandon, and Oberhofer has received some modest hype.

And then there was Dear Records, where Hamilton, Stasiak and Treleven first got together last decade. Between 2006 and 2008, Dear Records reflected a tiny (less than a dozen people), nicely insular music scene that owed much to the low-tech experimentation of Olympia's K Records and Anacortes' Mount Eerie. 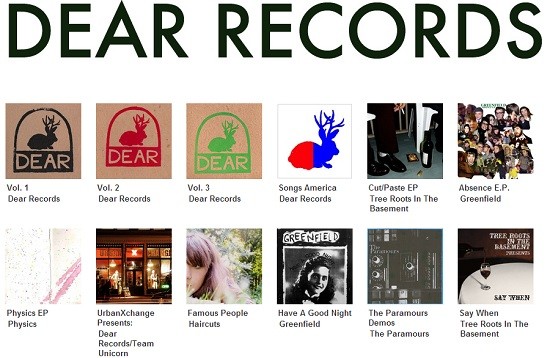 The entire Dear Records catalog -- four compilations and eight CDs -- is currently available for streaming on Bandcamp. It's a fascinating listen, overall. Over the course of these dozen releases, the nine or ten participants played in each other's bands and created small four-track gems with plenty of cheap keyboards, makeshift percussion and fragile melodies. One can imagine small basement and backyard shows with a few dozen attendees, most of whom might have ended up onstage at some point or another.

As far as the Widowspeak connection, Stasiak recorded as Flight. However, only one of his recordings, a cover of the Clash's "I'm So Bored with the U.S.A.," made it onto Bandcamp. Treleven led Dylan Treleven and the Soft Young Minds, played guitar in the Paramours, and added piano to Tree Roots in the Basement. (He also continues to operate Station Record Club, with several fine compilations for download.) As Haircuts, Hamilton recorded a full-length CD, 2007's Famous People. She also contributed to all four compilations. The Haircuts material mostly consists of charming Casiotone pop with occasional acoustic guitar and, oddly enough, "Believe"-styled autotune effects. There are subliminal hints here and there of her Widowspeak material, but by and large, these recordings are closer in spirit and style to early efforts by Mirah or the Blow. Only on a cover/rethinking of "America the Beautiful" does she begin to approach the shoegazing Americana that she'd later create with Stasiak and Robert Earl Thomas in Widowspeak.

More than just a missing link in the careers of better-known artists, Dear Records hosted an impressive little microscene in its own right. In the tradition of the best tiny indie labels, its bands sounded like they were playing for each other first and foremost. It's a piece of indie-music history that deserves to be heard.