Its been a little over two years since Alberta-based musicians Megan James and Corin Roddick released their first song under the name Purity Ring. In that time, the pair have played Pitchfork, released the full-length Shrines, collaborated with Danny Brown and covered Soulja Boy. Their music blends hip-hop beats by Roddick with James' ethereal, feathery vocals, performed live with a haunting light show timed to match the music. And Saturday night they took a near sold-out crowd at Plush (3224 Locust Street; 314-535-2686) underground, transforming the stage into a hazy, supernatural cave.

In similar style to Purity Ring, Blue Hawaii's Cowan arranges the beats and Standell-Preston leads on vocals in what it describes as "tropical-pop." At the beginning of the set Standell-Preston told the crowd to expect a set that builds, beginning with restrained, dream-like and almost melancholy songs that evolve into something much louder, more aggressive, scattered and experimental.

That progression -- which bordered on catharsis -- and passion are the strengths of Blue Hawaii's live performance. Cowan and Raphaelle Standell-Preston conjure a soft, warm paradise in the distance and take the audience along for the ride -- a journey that's sometimes rocky, but always rewarding. The only break in the trip came near the end of Blue Hawaii's set, when an audience member offered Raphaelle Standell-Preston a "double-double" whiskey. After accepting it she soapboxed briefly about how "our generation" boozes, and how we should all slow down, party less hard and appreciate the simple pleasure of a gin and tonic in the early afternoon. In Blue Hawaii's endless summer, there's wisdom and inspiration in moderate but consistent day-drinking. No complaints here.

After a 35-minute set comprising most of Untogether, Blue Hawaii called it quits around 9:15 p.m. Within less than 30 minutes, Purity Ring quietly took the stage, shrouded in waves of heavy smoke and haze. Perhaps the most arresting aspect of the band's live show is the way the music is synched with a light show, controlled by Roddick and James via separate drums. 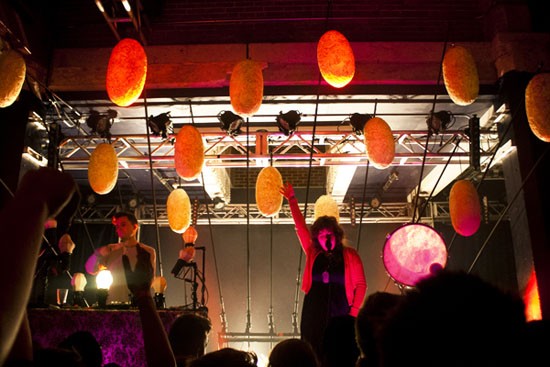 Overhead hung fifteen opaque lamps, shaped vaguely like elongated brains etched with veiny grooves running along their surfaces. The experience of standing beneath these glowing orbs is not unlike the scene in Aliens when Ripley discovers the hive of incubating extraterrestrial eggs -- though here its enchanting, almost comforting. The lights and haze frame Purity Ring's mystical sound and looped, echoing vocals in a cavernous way, as though you've traveled underground, or perhaps to a far-off, phantom world.

That effect was intensified midway through the set during "Lofticries," when James began brandishing an antique mining utility lamp across the stage, casting a soft yellow glow around the room. With only one album to pull from, the band played every song on 2012's Shrines, as well as the recently released fan-favorite cover of Soulja Boy's "Grammy." By 10:40 p.m. the dream came to an end, with the band announcing a late-night after party with Blue Hawaii at mushmaus (2700 Cherokee Street). Between Purity Ring and the mushmaus after party, RFT's own DJ Billy Brown spun upstairs at Plush from 10:45 p.m. to 1 a.m., and Purity Ring and Blue Hawaii DJed at mushmaus from 2 to 4 a.m.

Critic's Notebook: Personal Bias: I was surprised Purity Ring chose Blue Hawaii as tour support, as they have so much in common, but to see the two perform together is to understand how serendipitous a pairing it is. Random Detail: I've never seen so much haze at a show in St. Louis. At one point James even asked Plush to lay off for a bit. Overheard: "I wonder what's taking them so long? They're probably making out."