Out Every Night: The Best Shows in St. Louis from April 8 to 13 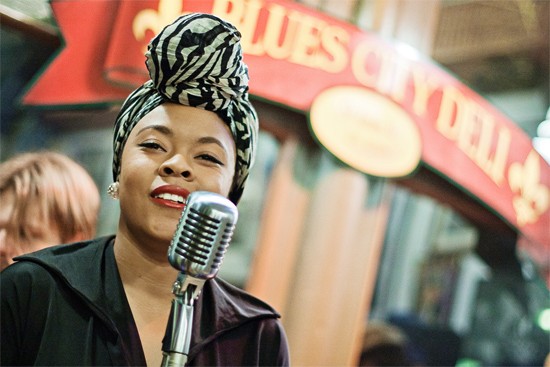 Warning: show-going can be bad for your health. I type this with watery eyes, a sore head and throat, and a forever-runny, impossible-to-breathe-out-of nose. I suppose all that putzing around in the rain between breaking a sweat at shows over the weekend really exacerbated things quickly. Bah! Worth it. Sneeze some shows this week.. I mean, see some shows this week. Locals Nikki Hill and Fred Friction release albums, while touring acts such as Ed Schrader's Music Beat and Widowspeak make stops locally. Click ahead for more recommendations.

Chuck Ragan Monday, Apr. 8, 8 p.m. w/ Dave Hause, Tim McIlrath, Rocky Votolato, Jenny O @ Old Rock House - $18-$20 By Michael Dauphin From Chuck Ragan on Getting Wiser and Settling Down: Whether he's banging out guttural post-hardcore, punk rock anthems with Hot Water Music or delivering heartfelt, jagged-yet-delicate country ballads on his own, Chuck Ragan's honesty and sincerity have always seeped through his songs. His everyman's music paired with his non-stop touring schedule reveals him as a songwriter with little to win and nothing to lose.

IO Echo Tuesday, Apr. 9, 8 p.m. w/ Garbage @ The Pageant - $30-$35 By Jaime Lees Gothic music gets a bad reputation. Most people think that goth bands are hateful, harsh and ugly, but bands like IO Echo show the other side of goth: the romantic side. IO Echo is more like flowers and velvet than black eyeliner and combat boots. Yeah, it's dark, but it's dreamy, too.

An Evening of Bluegrass Thursday, Apr. 11, 8 p.m. w/ Bryan Sutton, Ronnie McCoury, Luke Bulla and Barry Bales @ The Sheldon - $28-$32 By Roy Kasten It's tempting to label these five musicians--Noam Pikelny, Bryan Sutton, Ronnie McCoury, Luke Bulla and Barry Bales--as the "young guns" of bluegrass. The problem is that bluegrass pickers tend to learn their craft in pre-adolescence, if not in utero. As members of the Del McCoury Band, Alison Krauss and Union Station, Hot Rize, Punch Brothers and the Lyle Lovett Band, the quintet is truly veteran, even as it has long sublimated talent to teachers. But on stage at the Sheldon Concert Hall, these acoustic maestros will find the ideal setting to make a name for themselves, and to bend or break every rule all night long.

Nikki Hill CD Release Thursday, Apr. 11, 6 p.m. @ Blues City Deli - free By Mabel Suen After one look and listen, it's plain as day that roots rock & roll vocalist Nikki Hill, lovingly backed by her guitar-slinging husband Matt Hill, is the next big thing to come out of little ol' St. Louis. The saucy songstress' infectious smile, bad-ass vintage style and soulful, high-energy delivery arrive easy on the eyes and ears. After a lifetime of belting it out in church choirs in the deep South, she's on the prowl to impart some gospel of her own all over the globe.

One More Time: A Tribute to Daft Punk Friday, Apr. 12, 9 p.m. w/ Coreyography @ 2720 Cherokee - $10-$17 By Jaime Lees St. Louis electronic music fans are hungry for a hometown Daft Punk live show. The duo would do well here; the French house pioneers' special brand of synthpop-based party tunes are as universally appealing as our beautiful Arch. But we Mid-westerners are a resourceful people: If we can't have the real thing, we'll have a tribute night, with "anthems, remixes and club bangers" from local favorite Coreyography and more.

Widowspeak Friday, Apr. 12, 8:30 p.m. w/ Dots Not Feathers, Indian Blanket @ The Firebird - $10 By Mike Appelstein From a 2011 show review: Molly Hamilton shyly strums her songs and sings in a high, plaintive voice that's been compared to Hope Sandoval and Kim Deal. Stasiak keeps a steady, simple and reliable beat. Guitarist Robert Thomas looks like he should be playing AC/DC covers back home with his sideburns, facial hair and Night of the Living Dead T-shirt, but his lead guitar lines fill out the sound perfectly, adding tension and nuance to Hamilton's guitar and vocals. He is capable of everything from jazz to Morricone, and he doesn't skimp on the tremolo effects. With the band's midtempo, melodic songs, the obvious comparisons are to Galaxie 500 and Low -- fellow stripped-down trios who use subtle dynamics the way other bands use sheer volume.

Black Ice Saturday, Apr. 13, 8 p.m. w/ Another Mistake, Can We Win, Perfect People @ Venue TBA - $5 By Jimmy Eberle From "The Best St. Louis Punk/Hardcore Shows in April": Iowa's Black Ice's attempt at the whole Merauder sound, combined with Another Mistake's take on early-era Bridge 9 Records classics (American Nightmare, Panic, Carry On) will be worth your touring band dollar alone. But these bands are making the trek through to see their pals in Can We Win, as the band is winding down to an end. This will be CWW's second to last show, but not to bassist Drew Maxey's chagrin, since the band he fronts (still functioning) will be opening up and ending the calm before the storm.

Fred Friction Album Release Saturday, Apr. 13, 9 p.m. w/ Dock Ellis Band, Ransom Note @ Off Broadway - $10-$13 By Christian Schaeffer Like Walt Whitman, Woody Guthrie and Jose Oquendo before him, Fred Friction contains multitudes. He's been known, separately or combined, as a club owner, community radio DJ, raconteur, spoons player and all-around wild card. But with 2009's Jesus Drank Wine, Friction made his debut as a solo artist with an album that preyed on his loves of junked-up blues and ragged country while featuring a who's-who of local talent. Friction is set to release a follow-up, Murder Balladeer, at this week's release show. You can expect some familiar faces from the old days of Frederick's Music Lounge to be in the crowd, but Friction is wise enough not to dwell on past laurels, PBR-soaked as they may be.

Cheryl Wheeler Sunday, Apr. 14, 7:30 p.m. w/ Kenny White @ Off Broadway - $15-$18 By Roy Kasten In some respects Cheryl Wheeler is the archetypal New England folkie: personal, lyrical, resolutely acoustic and frequently witty. Her finger style is fast and deft, the sound of some golden arachnid weaving by blind instinct, her voice as clear and luminous and tense as dew caught on fine-spun webs. Wheeler, who has been writing songs from the age of seventeen, has never kept a day job. Her songs have been cut by Bette Midler, Juice Newton, Linda Thompson and even Suzy Bogguss, who had a Top 10 hit with "Aces" in 1992. Onstage, Wheeler cuts any late-night comedian (her ode to classical cellular ring tones is like sing-along Woody Allen) and then cuts to the heart's quick with lines like "When we were in love, or whatever it was/We tore apart their believing hearts/ Just to ride that passion in" or "Your absence is present in all that I do/In the sun on the field, in the poem I keep saying." Yeah, she's a sensitive singer-songwriter, but she's as gifted and stirring as they come.