The Ten Best Shows in St. Louis This Weekend: April 5 to 7 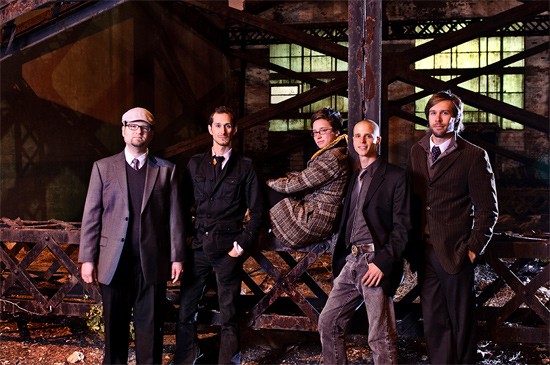 Sometimes, it's good to unplug the headphones and take a break from music for a minute simply to absorb the sounds from immediate surroundings. Take the Riverfront Times office soundtrack lately, for instance. Above my head, some intense industrial power sanding or something rattles the mug of tepid coffee on my desk. On either side of my workspace, I can hear my Daily RFT counterparts discussing Mike Tyson and interviewing accused puppy draggers. And every few days, I can look forward to the sounds of the workplace Jellinator creating ripples of mixed reactions from the far reaches of cubicles. Never a dull moment.

OK, I lied. Sometimes, there are dull moments. But I reckon that's when looking toward the weekend comes in handy. What soundtrack will you choose to fill the likes of Friday and Saturday? There's so much going on that we couldn't narrow it down to just one post. Check out our most recent Out Every Night post for options including The Futurebirds, Hey Marseilles, Hot 8 Brass Band, Tight Pants Syndrome's EP Release and Useless Eaters, and read on for even more recommendations.

Tef Poe w/ Sean Falyon, Doorway @ The Gramophone 10 p.m. | $5 Tef Poe celebrates his induction into BET's 106 & Park Freestyle Friday Hall of Fame with a $5 show at the Gramophone. Check out his recently-released, excellent ten-minute freestyle over Drake's "5 A.M. in Toronto" instrumental, and come early; this show is likely to sell out. (DH)

Bad Religion w/ The Bronx, Polar Bear Club @ Pop's Nightclub 7 p.m. | $28 Thirty years and sixteen LPs in, Bad Religion are still at the head of the class when it comes to intelligent, catchy punk rock. The band's latest, True North, is loaded with catchy sing-a-longs and riffs -- check out our interview with the band about the new album here. (DH)

The VCRs: A Tribute to the '90s @ The Gramophone 9 p.m. | $5 The VCRs quite aptly play covers of songs from the 90s -- think all the stuff you would hear on the "Wayback Weekend" on the Point -- with TVs and actual working VCRs onstage, allowing fans to choose from a variety of "classic" 90s movies to watch along with the music. Fun! (DH)