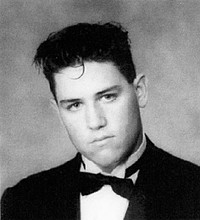 Do you know why Lance Berkman was, empirically speaking, the single most badass Cardinal of the past decade? (Yes, empirically. It's been scientifically proven.)

No, it wasn't the awesome soundbites he routinely handed out or his wicked sense of humor. On-field exploits? Ha! Don't make me laugh. It wasn't even the mullet, paragon of all that we St. Louisans hold sacred.

What made Lance Berkman the baddest-ass badass of all badasses was his walk-up music. Most guys don't put much thought into the song they want played when they come to bat. Lance Berkman clearly did, and when you heard the angelic, apocalyptic strains of Johnny Cash's "God's Gonna Cut You Down" echoing through Busch Stadium, everyone in creation knew who was up.

Walk-up music is a funny thing, you know. It's easy to overlook and just take it for granted as part of the scenery. If it is noticeable, it's usually because the player coming to bat has chosen something that proclaims loudly to everyone in the stadium just how lousy his taste is. But every once in awhile, a guy gets it just right. Ryan Ludwick with "Brass Monkey". David Eckstein picking "Number One Spot" by Ludacris, proving no matter how limited Eckstein's abilities as a player were, he knew how to make an entrance.

So here are a few suggestions for the men of the diamond, for any players who might be mulling over what song they would like people to associate with their name at the ballpark. Five, to be exact. Players, take note. Choose from this list, and your name will go down in the annals of baseball history. Guaranteed.

OK, so language could be a little bit of a problem on this one as "get the fuck up" isn't the most family-friendly of sentiments. (Though one could argue it's a fitting one, considering the occasional tendency toward over-politeness of Cardinal crowds.) Still, a little creative editing could totally get around that.

It's got one of the all-time great samples in rap history, using the original score from Godzilla to masterful effect. (Though that particular bit of brilliance also led to the record going out of print, so you win some, you lose some.) What player doesn't want to scream, "King Kong ain't got shit on me!" after getting a big hit? This song says it for you. 4. "Miserlou" by Dick Dale & the Del-Tones

Somewhere right now there's a lead-off hitter who desperately needs to get him some Dick. He might not know it yet -- might be completely in the dark about his need for Dick -- but he'll find out soon enough.

The promise of "Miserlou" is all right there in the first ten seconds. Everything you need to know about the song, about the virtuosity of the man playing it and the bumpy, exhilarating ride it promises to take you on is right up front. For a man tasked with igniting an offense, you can't do much better than that.

And no, just in case anyone reading this list is wondering, that shitty song where the Black Eyed Peas sampled this classic does not count. Not even close.

To be fair, you could probably make a list entirely composed of Daft Punk songs that should be used in athletic competitions at every possible moment. (Not a bad idea, actually.) And after narrowing things down as far as we possibly could, those crazy French cyborgs had to have two songs included.

"Robot Rock" has a great riff, a pounding bassline and the kind of dramatic kick in at the beginning that would be hard to beat for a crowd moment. "Harder, Better, Faster, Stronger" is basically a mission statement for athletes. (And might actually have an even better bass part.) Sure, you could probably choose between them, if you had to, and if you had years of your life to dedicate to unraveling the secrets of the awesomeness of French electronic music. But isn't it better to just enjoy both? 2. "The Stars of Track and Field" by Belle and Sebastian

Stuart Murdoch was a sick man for a very long time. Suffering from chronic fatigue syndrome to the point he was unable to engage in much of anything, he found delight in the simplest, most mundane aspects of life. All the things ordinary people take for granted that were out of his reach. Yearning for just...a chance.

Before his illness he liked to run. That joy, and the loss of it, inspired him to write "The Stars of Track and Field." It's a song of longing, a song of looking in from the sidelines, wishing for even reflected glory to visit. The spotlight here isn't even all that bright, and yet it still glows like a beacon for those left out, those who want but do not have, the tiny details of being someone else, someone who might be just a little more special.

Really, isn't that perfect? Isn't that a little bit of what we all feel at a sporting event? We cheer for our tribes, relishing the camaraderie of invented rivalry against the pure evil which exists in a community three towns over, all the while yearning for that reflected glory of victory to embrace us, to lift us up, to make us feel a part of something we cannot have, that we have not the talent to ever grab. A wholesome, wistful sadness, watching the tiniest, privileged fraction of humanity do what the rest of us can only dream of doing. It's all right here, on display, in this song. It says so much about why we love the games we do and the players who get to be there, in that spotlight.

Or, maybe that was all bullshit, and it would just be really, really funny to watch the crowd's reaction as a hitter slowly saunters from the on-deck circle to the batter's box with a Belle and Sebastian song playing. Either way, really. 1. The Batman Theme

Don't pretend you don't know it. The original. The classic. Perhaps the greatest theme song of all time, heralding the arrival of Adam West every week to fight the forces of evil. If it's good enough for West, it's probably 1,000 times too good for everyone else.

And really, come on. How has no one ever thought to use this before now? Player leaves the on-deck circle, heads to the plate, what does he have in his hand? That's right, a bat. You can't tell me there isn't at least one guy, in all these years, who thought to himself, "You know, I've got this bat, and I'm the man. That kind of makes me...holy shit! I have an awesome idea!"

Bat. Man. Batman. This is an idea whose time has come. Get on it, somebody.

So those are our picks. Think you've got a better idea? Stick it in the comments, and maybe you'll get to be part of some future list.