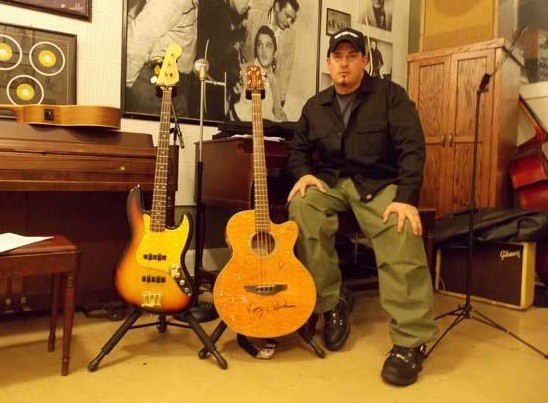 On a particularly frigid January afternoon this year, I stumbled upon an interesting scene in the Delmar Loop (where RFT Music HQ is located, for those unaware). Moving up and down the streets was an enthusiastic man with an acoustic guitar strapped on his back, flanked by another fella, pointing a video camera at the first. Intrigued, I introduced myself.

Jay Brook Lipe, principal figure of local act Jay Brooke Lipe and the Terrible Twos, was enthusiastic and talkative, despite the single-digit temperatures. He explained that the two were shooting a video for some material that he had just recorded at Sun Studios in Memphis. The rapid-fire conversation that followed dizzingly ran through mentions of everything from Parliament to Greg Ginn.

Speaking of Greg Ginn, Lipe will be playing a show with the punk guitar legend on April 27 at the Spirits Bar and Lounge in Alton. We spoke to Lipe about Ginn, recording at Sun Studios, and his history in and around the St. Louis music scene.

RFT Music: How long have you been playing in the St. Louis area? How did you get your start?

Jay Brook Lipe: The first show I ever seen in my life was Black Flag in 1984 at Mississippi Nights. I soon then started singing for a Black Flag/MDC/Black Sabbath/Misfits cover band. I went to college in 1988 at SIU-Carbondale and started my own band Bum Funk Egypt. We played all the famous Elizabeth street nitrous oxide parties and ended up opening for Foghat. We were a hardcore funk punk band. Then I was in a band called Stickboy, we did a show with Fragile Porcelain Mice in 1991. My drummer, Sean Younger, was the same drummer for Whoppers Taste Good out of St. Louis. I then moved to Atlanta, Georgia. That's where the real story begins.

How did you get hooked up with Greg Ginn? Do you guys have history together? 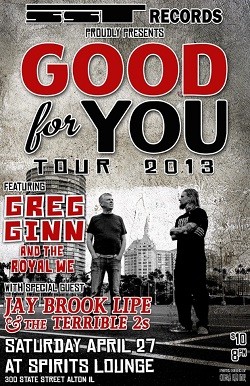 I opened for Greg at the Firebird in 2010. We became friends off of that show, and in 2011 he drove from his SST headquarters in Austin, Texas, and I from Godfrey, Illinois. And we met and went camping at Wakarusa Music Festival in the mountains of northern Arkansas. I keep in touch with him on a regular basis, so it only made sense to bring him to Alton. He loves animals, especially cats.

You release a lot of videos for your songs. How important do you think multimedia of this kind is for a burgeoning artist? Have the videos been paying dividends as far as building a fanbase?

In today's age, multimedia is the fastest way to reach the world with music. I created my new Facebook band page less than a month ago, and I am getting people from Brazil, Argentina, Italy, UK and the USA liking my band page and asking me questions and paying attention to my songs. I'm not concerned about turning a profit right now as much as I am working to just release my music to as many people that would like to hear it.

You used to tour with Parliament. How'd you hook up with that group? What's the funkiest thing that ever happened while you were out with them? The strangest? I met P-Funk for the first time on July 2, 1993, at Mississippi Nights in St. Louis. It was the weekend of the VP Fair. I got to play my bass guitar for George Clinton out back before the show, and he then signed my bass with a knife and carved his name in it. It wasn't until 1998, when they were inducted into the Rock and Roll [Hall of Fame and] Museum, that I really became close with Fuzzy, Grady, Calvin and Ray. They are the original Parliaments.

One of the funkiest things I saw was when I got invited to go see the Gap Band in Atlanta as a personal guest of the band, and sit on the side of the stage during the show. That was funky. Oh, and opening the back door at a club in Denver and letting the horn section for Earth, Wind, & Fire get onstage with the P-Funk was freaking nasty as well.

The strangest thing was In 1999 when we toured Colorado and we played the One World Music festival in Crested Butte. I was kidnapped by the promoter of the festival, taken to a private movie-viewing party on the outskirts of town, and sat in a huge mansion with 40 other people in a huge in-home movie theater, and watched the live footage of Bob Marley opening for Lionel Richie at Madison Square Garden by the onstage cameras. It was from Santana's personal collection. I was blown away by the footage. No one had ever seen that before.

You recorded recently at the legendary Sun Studios. What was that experience like?

I have been playing in the streets of Memphis for over thirteen years; I knew it in my heart a long time ago I was going to record at Sun. So, when everything aligned...I jumped on the chance. Sun recorded Jakob Dylan, Grace Potter and the Nocturnals, the Flaming Lips, and Chris Isaak in 2012, just to name a few. It was an amazing experience. I went there prepared. I hired Crown Royal from Memphis to play guitar on my album. He was the touring guitar player for Albert King. Albert is a major world-renowned artist from St. Louis that was inducted in 2013 to the Rock and Roll Hall of Fame [and] Museum as well. Crowns' heavy and gutsy Memphis blues-guitar style was an interesting mix for my funk-punk-reggae approach. I really feel l we got some good stuff out of that recording.

Aside from the show with Greg Ginn, what else do you have on the horizon? Any touring plans or upcoming releases?

I am opening for Reagan Youth on April 23 at Fubar, one of my favorite St. Louis clubs. I will be playing the Black River Music Festival down by Johnson Shut-Ins in the first week in August as well.

I'm planning a tour and to do some shows with the Independents this summer as well. The Independents were produced by Joey Ramone and was the opening act for the Ramones on a couple tours. They are great friends of mine and a great band; we have done three shows together in the last couple years and they always crash at my pad when they come to town.

I am also currently in the studio working on some of my harder edged songs and we will release that CD later this spring.