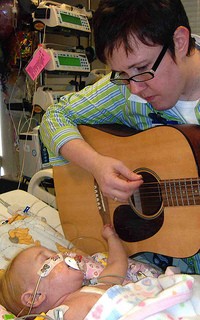 [This week's music features explores the music therapy program, headed by Christy Merrell, at St. Louis' renowned Children's Hospital. Writer Jaime Lees had more on the subject to discuss than our print wordcount constraints would allow.]

I wrote the music feature this week, and in the eight or so years that I've been writing for the Riverfront Times, I don't recall ever being so concerned with doing a good job on a piece.

The story explores the music therapy department at St. Louis Children's Hospital. It's a topic that has been on my mind for a long time. And after I did some research and didn't come across much information about the program, I decided to go find out about it for myself.

Usually, my little rule expresses itself in fun ways-- I'll write something if I think I can make it entertaining or if I have a unique perspective to offer. But this feature was very serious. This was journalism. My dumb opinions or jokes wouldn't be needed this time. In fact, they would only get in the way of the story.

On the day of the interview I put on my best music-writer-attempts-to-look-presentable outfit, tied back my wild lioness hair, packed up my micro cassette recorder and went to the hospital.

The woman at the heart of the story, Christy Merrell, does more than put her patients at ease; she put me at ease, too. She very obviously loves her work, but her self-deprecating humor while discussing such a serious topic was more than appreciated.

Because of space constraints, I wasn't able to include many of Merrell's spontaneously hilarious quotes. For example, when describing how she always seems to get along well with young boys, she said it's because she lives by the policy that "farts are always funny."

With her knowledge, experience and upbeat bedside manner, I got the feeling that this is exactly the kind of person you'd want around if your kid was sick. Kids seem to think highly of her, too. The boy mentioned at the end of the story, Joe, came up again and again in conversation.

When the interview was over, Merrell showed me a video collage on her laptop that she had made of Joe. In the collection of clips, Joe is seen in various stages of sickness-- sometimes chubby and vibrant, sometimes thin and thoughtful.

A few different times during the course of the video, Merrell seemed lost in her own memories, temporarily forgetting that I was sitting beside her as she stared at the computer screen, hand covering her half-smiling mouth, eyes wet with emotion.

The end of the video features Joe, the Beatles fanatic, wearing round hologram John Lennon glasses while sitting on his hospital bed. He sang an animated a capella version of "I Am the Walrus," making various beatbox noises and throwing his hands up during the "Woo!"

That little video clip kind of changed me forever. In addition to (once again) renewing my faith in the Beatles, I suddenly understood the depth of the work in this program and how deeply rewarding it must be to help out sick and injured kids.

So, you see, sometimes I get to write the stories and sometimes the stories end up writing all over me. I'll never again hear that song without thinking of that video, good people like Christy Merrell and an awesome kid named Joe that I was never lucky enough to meet.

If you'd like to donate to the music therapy department at Children's Hospital, call 314-454-6178 or mail donations here: