[Updated with Winners] The Tweet 16: Vote Now in Round One of RFT's Standup Throwdown! 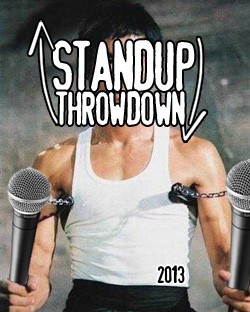 Comics stay tuned; We'll be announcing the specifics of the next round very soon! Thanks also to everybody else for entering, and all you readers for voting!

St. Louis is a town full of aspiring comics. There are comedy open-mic nights every day of the week, and on any given night anywhere from 10 to 50 people put their names on a list and wait for their five minutes of stage time.

Thus, we bring you the second annual RFT Standup Throwdown, a competition intended to recognize and celebrate this city's up-and-coming comedians. Entry for the competition was simple. All the comics had to do was tweet, addressing the following topic: "That is so St. Louis..." while using the hashtag #so_stl.

Riverfront Times received some 300 tweets from more than 25 comics. Below are what we considered the funniest 16 tweets. Your votes will divide the pool in half and bring the competition to Round 2: The Elite 8.

The Final Four will perform at a special live RFT show on April 9th at Plush, where the winner will assume the title of Throwdown Champion and secure a spot on the May installment of Comedy in the Lou at the Firebird (exact date TBA).

Let's get down to it! Here are their tweets; cast your ballots now. Voting ends at 5 p.m. Wednesday, March 20.

When the sun hits Chuck Berry statute, his eyes let out golden rays into the Blueberry Hill's women's bathroom across the street #so_stl

The only math we do here is racial division. #so_stl

St Louis has developed such a bad reputation that East St Louis has just voted to change their name to North Sauget. #so_stl

St. Louis is too awesome for an IKEA store. We like our assemble-yourself furniture from one of the two remaining Sears stores. #so_stl

We could take public transit... Oh wait! We have cars! #so_stl

We welcome people crossing the Mississippi with a giant frown #so_stl

So hood even the googlemaps car won't go there... #so_stl

Bosnians were nervous when moving to STL at first, but the dilapidated buildings and gunfire made them feel right at home. #so_stl

Where the residents get plowed quicker than the streets #so_stl

A city so racialy divided it could be considered a 1950's theme park. #So_stl

Throwing beads at a farmer's market and calling it Mardi Gras. #so_stl

Do you like pizza? We have something similar. #so_stl

Most cities in the Midwest try to be a small version of Chicago. STL would rather be a huge Memphis.#so_stl

Budweiser has proven it contains 5% alcohol, and remains the beer of choice at 100% of above-ground pool parties. #so_stl

I drink just enough to tell the truth but not enough to crash my car. I'll be lecturing at Wash U this Thursday. #so_stl

The Bowling Hall of Fame was knocked down to make room for a cowboy bar. #so_stl