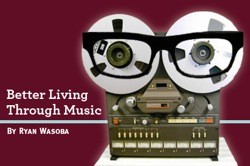 Last night, I did not attend the greatest concert of my life. Alarm Will Sound, the New York miniature orchestra I wrote about in this week's RFT feature, performed a Radiohead-inspired composition by Steve Reich, my favorite composer, and I did not go. I had no prior obligation, no-last minute emergency; I just didn't feel like it when the time came. The younger Ryan Wasoba would go to any show at any time on any whim, but the older me runs into more and more situations where music does not fit into my life.

People often casually say they are "obsessed" with music. It's not that I don't believe them, but people who are truly obsessed tend to not be proud of the obsession. Sometimes it sucks having music constantly on the brain, like when I should be thinking about something important but instead I'm thinking about how Blessid Union Of Souls existed.

This column is intended to explore the intersection of music with life, and sometimes you have to choose life. A deep relationship with music involves sacrifice. We offer our money and energy to music, but the most important sacrifice is time. Music takes time because music is time; the most basic definition of music is melody and rhythm, both of which are based in the structure of time. Steven Hawking says that time is a human construction. Well, so is "Freebird."

I understand why I may appear pessimistic, saying that music does not always fit into life. But think of how much we try to cram music into our daily routine, at home and in the car on the way to work and at work as much as we can get away with and while exercising and who am I kidding, nobody reading this probably exercises. I certainly don't, but when I do, I prefer leaving the iPod at home.

The modern obsessive hears an absurd quantity of music daily and probably reads articles about twice as many bands as he/she actually has time to listen to. It is hard to have a meaningful relationship when you are constantly speed dating. Slow down, tiger.

Dad-jazz guitarist Pat Metheny once put out a record called Zero Tolerance For Silence. I used to be put off because it is a guitar noise record with no direction or purpose. Lately I have found the title offensive; in the right moment, is anything as sweet as silence?

I felt guilty for not seeing Alarm Will Sound, but my bounce-back is improving. Every night something happens that we can only see once, and we are fortunate to have multiple examples of such situations in St. Louis on any evening. We can obsess, exhaust ourselves, and try to absorb every drop of music, or we can make music fit into our lives instead of molding our lives around music. Either way is valid, and god bless those who choose the former.

I heard that Killers song that asks "Are we humans or are we dancers?" as if the pair are mutually exclusive. Let's just be humans every once in a while.