Lunice Fermine Pierre II, known worldwide by his first name, is blazing his way toward the top of the electronic music scene. His first two EPs, 2010's Stacker Upper and 2011's One Hunned, garnered attention for the young Montreal native; 2012's collaboration with friend and fellow LuckyMe labelmate Hudson Mohawke, known as TNGHT, catapulted Lunice directly into the worldwide electronic music heavy hitters. After some technical telephone difficulties during his European tour, we caught up with Mr. Pierre via e-mail to talk about his third time back to St. Louis, and why he doesn't give out his set times.

Evan Jones: How often do people ask you if Lunice is your real name? Lunice: Quite often, actually. And they're surprised every time!

How has your European tour been going? Really good! This tour has really helped me size up what cities I can hit harder the next time with a full live stage setup that I'm planning to put together later this year following my first solo full-length album.

Montreal seems to have an ever growing army of great music producers. What about the city makes it such a hotbed for music production, and the arts in general? Montreal has always been the kind of city to influence itself to the world. I think it's from the generations of different cultures coming in and out of our city leaving a significant subculture that just stays and evolves within our lifestyle. So coming from that environment, comes many creative individuals coming up with things inspire others. 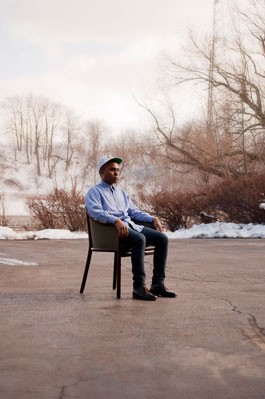 You recently tweeted that you don't give out set times. Is there a particular reason for this? Yes, I like to see support acts more like how people see acts when they go see a play at a theater. And I never call them "openers," I prefer to just call them "first act, second act," etc. I'm all about having the experience start the moment a person enters a venue. And for that reason, I never give out my set times.

This is your third time back through St. Louis. What are your impressions of the city? Miles Davis grew up in St. Louis, and I absolutely love to visit cities where great inventors, musicians, writers or how I like to call them "creatives," were born and/or raised. It's always inspirational, to a certain level, whenever I come through a city such as St. Louis.

St. Louis has some unusual food items we're known for, such as St Louis-style pizza (thin crust with provel cheese), toasted ravioli and gooey butter cake. Montreal has the almighty poutine. For the uninformed, why is poutine great, and when is the best time to eat it? My stomach is grumbling just reading this question, haha! Poutine is definitely a good "after-club" solution for food. But to the honest, anytime is poutine time. And as for what makes this dish so great? Quebec.