Karaoke Night Sucks; What Do You Do? 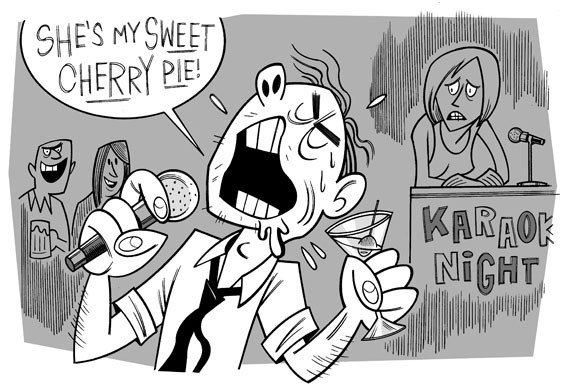 Karaoke can be a dangerous endeavor. What can you sing that won't make friends shun you? How can you go balls-out during your next performance? Each week in "Ask a Karaoke Host," RFT Music writer and professional karaoke host Allison Babka answers your burning questions about maximizing your melodious mutterings and minimizing your friends' pain. Ask her stuff by e-mailing rftkaraoke@gmail.com or hashtagging #rftkaraoke on Twitter.

Author's note: After covering just about every karaoke angle possible over the past six months, I'm pooped. We'll be putting this column on hiatus after the March 20 edition, so if you've got crazy questions about choosing songs, performing onstage or enduring the audience's proclivity to point and laugh at you, now's the time to send 'em to rftkaraoke@gmail.com!

Besides "Theme from New York, New York," what else should be banned from a KJ's song list? -- Highway to Hell

Theoretically, nothing should be banned. If a song is in the book, it's meant to be performed. I get new songs every week for a reason: Why would I buy/license them and then prevent you from singing them?

If I owned SuperUnicornKaraokeLand, here's what I'd be excited to ban:

At SuperUnicornKaraokeLand, I'd also employ a rule prohibiting you from performing a song more than once a month. Your rendition of "No Diggity" sure is swell (not), but people don't need to hear it every damn week. Branch out a little, Rerun.

Will you show me how you do everything? -- The Scientist

You mean let you watch me set up the speakers and amps, fiddle with the buttons and dials, do multiple mic checks, rearrange the songbook pages, distribute said books, load up the first hour's worth of videos, decipher people's handwriting on their song request slips, continually adjust the sound while people are performing, make last-minute changes to the song lineup because people are outside smoking or are too drunk to hear me call their names, monitor crowd mood, watch out for unruly folks and ensure that the bar is making money?

Fuck no. I've got shit to do, son. Find another babysitter.

Some karaoke nights can be magical, while others can be soul crushing. How do you as the KJ cope with a night that isn't going well? -- Fell on Black Days

When people aren't singing, I tend to take it personally. It's usually not my fault -- after all, sometimes I have to go along with the quiet mood of the bar -- but I still get bummed out when I'm not able to bring about a John Hughes-worthy party. Occasionally after taking requests, serenading folks with selections from "The Great Allison Songbook" and forcing my two friends into reluctantly performing six songs in a row, I just have to accept that the audience simply feels like drinking instead of singing. It always blows my mind.

When that happens, I do a few things to prevent myself from getting too far into a bitchy funk:

Yes, when my phone inevitably dies, I do, too. I set the rig to auto-play and take frequent fifteen-minute pee breaks, counting down the minutes until I can get into my car and properly sing out my ya-yas that have been dying to escape all night.

As an in-demand karaoke host at many bars and events, Allison Babka receives her share of drunken song dedications, occasionally makes people cry and even has been glorified by a singing psychic. She sings entirely too many Miley Cyrus songs, and she hates herself for it. Bug her with karaoke nonsense on Twitter at @ambabka, and use #rftkaraoke.