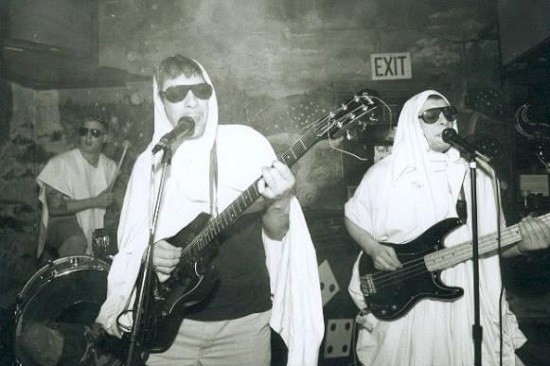 Are you sick of being responsible? Does it annoy you to have to follow rules or be pro-social? Do you like basements? Well, if you are a goofy, degenerate weirdo who doesn't quite fit in anywhere else, you might consider our city's DIY hardcore/punk shows.Your underlying anger problems can be brought out to their fullest potential (in a positive way). These are my recommendations for great local and national bands that don't play five-minute (marathon!) songs or remind you about drink specials. General rule of thumb: If you have five bucks and can show up by 9 pm., then it's go time in the pit. One, Two, Fuck You!

March 8 @ the Demo. 8 p.m. $10: The Copyrights, the Haddonfields, the Mondales and Better Days

One of the best acts out of our drunken-little-sister-at-her-first-college-party city, Carbondale, Illinois -- the Copyrights -- is stopping by on its latest tour. This show is also at the newly reopened/christened venue attached to Atomic Cowboy, the Demo (formerly the Fox Hole). This overload of pop-punk is sure to either get you laid or get you drunk after sweating your dignity away to some of the catchiest bands within a 200-mile radius.

Demonstrate your style at this mean-ass show on a Monday night. Some of the toughest hardcore bands in St. Louis and the country will be shaking the foundation of the FUBAR lounge. Bent Life's going to make you want to jump off of your friend's heads. Also, I'm pretty sure the band does an Outburst cover. Columbia's Discourse does the noisy, rock-based heavy hardcore we've gotten from the south in a catchy fashion. Out of Time's attempt to breathe life into No Warning's pre-nu metal corpse will be moshed at/to. Resolute is a damn-near brand-new act made up of former Out of Time members bringing a similar style to the table.

The Spits is returning to St. Louis once again. The hauntingly catchy, simplistic Ramones-throwback style that the Spits bring will make you pogo your damn bones off. This will be the Spits' third show in town in the past year, following a ten-year gap between visits. Also on the bill is the self-proclaimed "most hated band in St. Louis," the Scam and conspiracy-core superstars Maximum Effort. Come to FUBAR and ruin one of your favorite T-shirts in this crowd of miscreants.

So dirty, gritty pop-punk isn't your thing, or you want to kill time during the opening bands for the Spits. On the lounge side of FUBAR there will be a fast, pissed off, heavy hardcore show going on. Between this show and the Spits, this night is probably going to go down in history as the most smoke machines ever set off at once in FUBAR's short history on this planet. A389 Records' touring workhorses Homewrecker and Full of Hell will be punishing all of those who aren't familiar with the intense, Integrity-derivative hardcore the label is known to champion. New Jersey's Old Wounds, also on the tour, will be punching its brand of Terror-esque modern hardcore into your head. Everything Went Black and Cathedral Fever will be providing the local support..

This is a basement show. The catchy-but-disjointing hardcore punk of Chicago's Gas Rag is coming to a venue, most likely near you, very soon. The band's demo on Hardware Records sounds like an American attempt at the style of Japanese hardcore legends, Gauze. Faultfinder from Kansas City will be stopping in as well, featuring ex-STL resident and Corbeta Corbata guitarist, Don Beasley. Let's show the old boy a good time, eh? Pink Sock is going to steal your women and take your drinks until they're puked back onto the floor in front of you. Animal Teeth will make you want to stay high. Ask ask ask ask ask ask, you oughta know by now....

It is time to knock down the cramped walls of CBGB's designated live music area. This structure will barely be able to stand the force of the bands showing up this night. Total Trash do a great female-fronted, noisy punk onslaught that brings the Germs to mind. The Can't Tells are "from Brooklyn and play songs of the loud indie/power pop persuasion" according to the Facebook event page (that links to an empty bandcamp page). All this and more? Yes, Shaved Women's monthly performance will commence at this show. Try not to mosh your way through the window.

Who is Break Anchor? It's the singer of the Suicide Machines' new band, in which he also sings. That's right, get stoked, though I wouldn't advise you to "break the glass" at this show or else the bar staff will probably kick your ass. But this night will prove to be another great contender for pop-punk show of the year. The vinyl version of the Humanoids' self-titled LP is now available on Throwing Things Records and will be at this show. Come see the Winchester before Andy moves. Breakmouth Annie will have you screaming for a Jawbreaker cover that it'll never do. This is going to be a fun night!

Seriously DIY as fuck. Bunnygrunt has been doing it for twenty years, still keeping in touch with the scene of weirdos that have supported the band, new and old faces alike, the whole time. This is something to be celebrated. Come to Plush and DIY will take over your soul. Stop letting other people do things for you. Start partying and writing killer riffs, because that's what these bands do. All puns, metaphors and semantics aside, thanks to Bunnygrunt for being one of the local DIY bands that really did and continues to do something themselves.

This is a basement show. Columbus, Ohio's Nervosas are going to cap off March with a visit to a DIY spot. Come be a big dork and freak out when the band's catchiness engulfs you. Local babe/dude-babes Doom Town will be running things, in true haunting, Euro-ish punk-sounding fashion, possibly with new jammers? This show is also Times Beach's first show. From what intel I can gather, this band is ex-Masculine Journey, possibly current members of Overdoser/Cardiac Arrest. But don't expect the speed of any of those bands, just the fantastic riff-ness. A band's first show is always awesome to be a part of, start this one off right with a sweet pogo session.