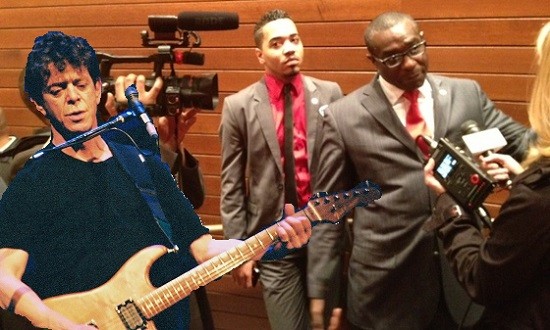 Yesterday the City of St. Louis essentially elected incumbent Mayor Francis Slay to an unprecedented fourth term. Technically, it was only the Democratic mayoral primary, but winning the primary all but seals the deal for the general election. Unless, of course, James McNeely shocks everyone and pulls out a victory for the Green Party.

See Also: -Slay Versus Reed: It's Time to Press the Reset Button

Generally speaking, we here at RFT Music aren't the most political bunch, and, personally, I didn't really have a dog in this fight (I wrote in Bob Reuter as my candidate). But that's not going to stop us from compiling a list of rock icon Lou Reed (born Lewis A. Reed) songs to console his fellow Lewis Reed, the St. Louis Aldermanic President and loser of yesterday's election.

It's easy to imagine a down-in-the-dumps Lew Reed hunched over an empty bottle in his living room, replaying the last year or so in his head: He launched a legitimate grassroots campaign; he rallied the unaccounted and disenchanted; and he instilled a sense of hope in those who were fed up with our city's stagnant growth. All for naught? Not necessarily, but it probably feels that way. (I wouldn't know, haven't lost a mayoral election ... yet). But it's almost as if Lou Reed wrote this song after losing a mayoral race to a three-time incumbent. Jaded and downtrodden, Reed sings: "You can't depend on intelligence / ooohhh, you can't depend on God / You can only depend on one thing / You need a busload of faith to get by." Pull yourself up by the bootstraps and hop on the bus, Reed.

This one's appropriate for a couple reasons. For one, you have Lou Reed riffing about a myriad of present day issues: local, geo-political, socio-economic problems alike. I gather Lew Reed was pretty fed up with the state of our city, too, and that's what presumably prompted him to run a campaign for change. But Sick of You also speaks to Lew on another level: We're sure he's freakin' sick of Mayor Slay.

We here at RFT Music have one bit of sound advice for Lewis Reed: get drunk. But, as Lou Reed encourages here, you have to have a positive mental state when doing so. Don't be that drunk at the end of the bar blabbing, "Man, I should be running this town. Y'all don't even know!" to fellow patrons. Nobody's interested, man. Sit back, have a few drinks and enjoy the ride. You're still the President of the Board of Alderman for the next two years, which is an influential gig, and one that carries a lot of responsibility. You gotta stay positive.

Here we have Lou Reed singing about Lew Reed's worst nightmare: the vicious Mayor Slay. Reed just can't shake this guy. He's been in office, taunting him and his ideals for twelve years now, and he isn't going anywhere anytime soon. Reed just can't hide from Slay and his vicious boyish charm. As President of the Board of Alderman, you can't not see the mayor. In a sense, he's your boss--although I doubt Reed refers to him as such.

One of the best album closers ever, and the perfect anthem for closing up shop and shutting it down. The campaign is over. The chips have fallen. The people have spoken--well, 22% of the registered voters, anyway. At any rate, I wasn't at Reed's campaign party at the Carpenter's Hall last night. But if I were, at the end of the night when the last bottle was emptied and while the somber gatherers licked their wounds, I would have commandeered access to the stereo and blared this baby.