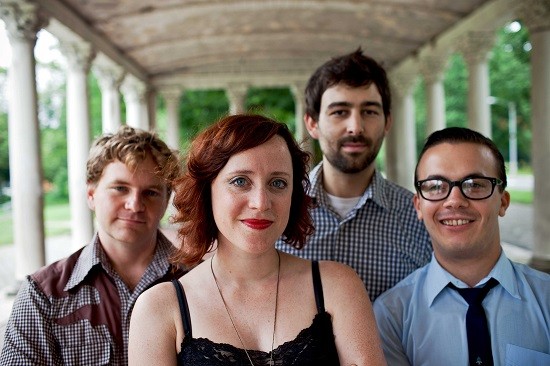 Howdy, folks. For the month of March (and possibly longer/shorter depending on my funds, stamina, and sanity), I am hitting three local shows each weekend. The rules: they must be on a budget (who pays more than $8 to see a show?), predominantly local bands, and well-supplied with tequila.

I suppose the aim of this column is to describe an average St. Louisan's show-hopping weekend, but I must plead in the defense of an entirely subjective viewpoint. I pick these shows based on what sounds interesting, and I don't even come close to representing all of the tastes and knowledge of the people of St. Louis. I suppose I would just like to demonstrate how many different experiences can be had within the realm of our city's music in one single weekend, and to present a small sample of the adventures to be had between the other 9-5: That is, p.m. to a.m.

I'm a fan of the Heavy Anchor, with their clever use of a garage door to separate the venue from the bar, their movie-theater seats, and their actual-hand-to-god-holy-shit-that's-real-lime-juice margarita. The sound is great (a little stressful if you're onstage, but perfect for the audience), the folks are nice, the back patio has a heater. You can't ask for much else.

Little Big Bangs have been building their following for years, and they continue to tighten up as a band. It is no insult to the other members to say that their drummer is their star--that motherfucker can play.

Hell Shovel, on tour from everywhere (the band boasted an international lineup and delightfully shaggy hair), made an excellent impression on the Heavy Anchor's audience. I have written in my notes, "Dear 2nd band, please tell me you have a CD so I can have quirky, slightly dangerous adventures with my free-wheeling friends." Also, "Kudos to lead guitar for his unmarked, mid-60's guitar with a single pickup."

By Acid Baby Jesus, I have written, "Acid Jesus=Awesome (2 margaritas)." I think this means I was two margaritas in and unable to qualify exactly why the band was awesome, but still I felt very passionately about it.

Everyone town has a boner for Demon Lover, and if you want to hear more about that check out this record review and this writeup.

I took some performance photos from this evening, but I prefer this pic of Demon Lover eating tacos at 3am. Superstars are just like us!

I intended to see King Kong Magnetics at Mushmaus. I got to the venue an hour after the posted time and waited about 45 minutes for the first band. Local celebrity couple Ryne Watts and Cassie Kohler waited with me for the show to start, and we discussed the different methods of head-nodding to properly encourage the first hardcore band. There was enticing screaming, but no one could tell me the band's name. Luc Michalski knows, but I couldn't find him to ask. [Editor's note: The band in question is Globsters.]

Then, over-exhausted by my previous night's shenanigans, I ducked out. I'm sure the show was delightful. Below is a sample of what I missed in favor of peanut butter cookies. Don't be like me. 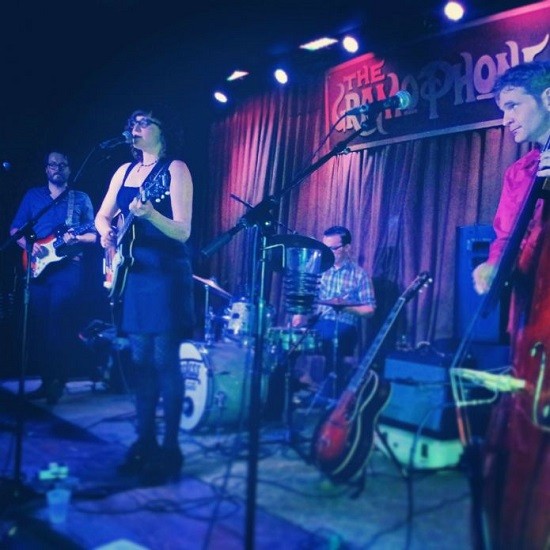 Miss Tess is my new hero. It looked like a young, happier Liz Lemon picked up a sweet electric hollow-body and started to wail. The band spanned the vintage spectrum of music: jazz, blues, country, rock. The set ended with a beautiful rendition of "I Don't Want to Set the World on Fire," which everyone hummed outside afterwards during the bar-wide smoke break between sets. Also, I heard Rambler Ryan Koenig murmur, "Now we can't play that song tonight," to his gal.

I would like to stress here that Miss Tess solo'd often, as well as her superb lead guitarist. Women that take solos are amazing.

Something fun about RDR shows: A separate band of dancers (including members of Miss Jubilee, and Janet, co-owner of Retro 101 on Cherokee) usually attend each performance. This adds an additional show up front, colorful and entrancing. There is always room for less-experienced dancers to groove along, which is totally considerate of the Swing Squad (my name for them; this is not an official moniker). These folks give a beautiful visual element to the music at hand.

The Rum Drum Ramblers are a St. Louis institution, though these days the band can only gig a few times per year. Now including Dan Conner on drums, they make a party into a party. I have standing orders for them to play my funeral, but I'm not sure they know it.

These days, RDR is promoting a new 45, available wherever fine Big Muddy Records products are sold . I was able to make it through a few RDR songs, then I had to face Monday morning and my week of normal 9-5ing.

So there was my weekend, March 1st-3rd. It is fairly typical of a St. Louis music junkie in pace and stimulation (and occasional cop-outs), though everyone has different preferences. Next week: Stay tuned! I'm thinking CBGB and Off Broadway, but a woman is entitled to change her mind.