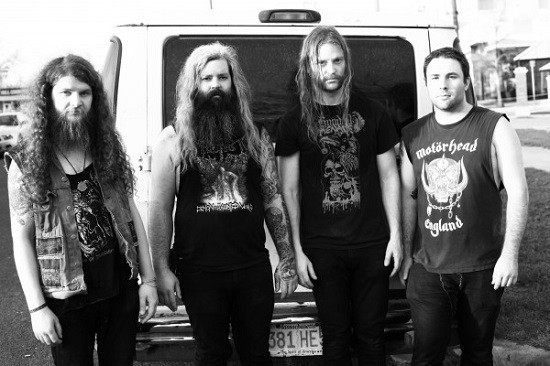 Looking for a good place to see flashy and exciting music played at high volume, have your mind blown by dark and powerful sounds, or just stomp around like a drunken goon with your shirt off? Then a heavy metal concert might be just the place for you. Each month I'll be offering my top picks of the upcoming metal shows in town that I think shouldn't be missed, and I'll try really hard not to make fun of the ones that do not fit my personal tastes. The good news is that March is looking pretty excellent for metal fans.

Mutilation Rites with Inter Arma, Ashes and Iron, and Everything Went Black March 11th at Fubar 7:00 pm / $12 Mutilation Rites's name sounds like a death metal band, but it's record label Prosthetic is home to mostly hardcore, but the band plays black metal. Confused? Don't be, because the band rules. I avoided giving it a listen for the longest time because I thought the band name was dumb; little did I know the name was taken from a song by black metal legends, Inquisition. Great, so I'm superficial AND I'm a poser. Anyway, as many of you know, that fine line between stupid and clever discussed by Spinal Tap can be all too evident in this subgenre, but Mutilation Rites land perfectly on the latter side of said line. The band plays fast paced, raw black metal that moves from anger to sadness to eerie beauty with intensity and purpose, never sounding contrived and without the corpse paint clown outfits. This is without question some of the best black metal you'll see in this town anytime soon.

Richmond, Virginia's Inter Arma is along on the tour and is one of those bands I'm happy to say I can't quite pigeonhole into a specific genre. The sound reeks of ominous black metal atmosphere, but with a much heavier low end and some progressive and spacey elements thrown in as well. Get there early because also on the show are Ashes and Iron and Everything Went Black, both the absolute top of the line when it comes to heavy local bands.

Jucifer with TBA March 13th at the Firebird 8:00 pm / $12 You think Eddie Van Halen has a big wall of amps? You think you know what loud is? You know nothing! Jucifer consists of one guy, one girl, and around eighty or more speakers on stage. The band's sound has varied widely over the span of nine records, ranging from grungy rock to soft and sweet to heavy as all fuck. These H.A.A.F. jams are what you're most likely to hear live, and when played through that bigger-than-too-big wall of amps, it's enough to make you throw up in your own mouth. The whole world could be coming to a fiery end outside the venue, and you'd never know that it wasn't just part of the song. [To clarify, this is a good thing.] Jucifer's live show is visceral and intense and unlike any other band out there.

Deceased with Animated Dead, Rites of Impiety, Encrypted, and Manifest March 16th at Fubar 7:00 pm / $12 Many fans of old school death metal badly want to see this show and don't even know it. Since forming in Virginia in 1984, Deceased has remained largely overlooked despite constant releases and touring over the years. The very first band to release an album on the now-monstrous Relapse Records (preceding death metal giants Suffocation and Incantation), the band has roots in thrash and speed metal, guttural vocals, artwork and lyrics that focus heavily on horror and the occult, and many other elements commonly found in first wave death metal bands. Deceased has since left Relapse and will be releasing another label debut, this time for the new Hell's Headbangers Records, later this year.

This show will also feature the CD release by Belleville, IL based death metal veterans, Animated Dead. Having released four demos and a live album since starting back in 1991, this appears to be the band's first full length studio album. Yeah, sometimes it takes 22 years to make a debut album, but having seen Animated Dead a number of times in the past, I can guarantee the album to be no less than br00tal as fvck.

Nile with Tyranny Enthroned and Eternium March 17th at the Firebird 7:00 p.m. / $20 "I hath been made to eat feces and drink urine." Why spend another St. Patrick's Day celebrating Ireland when you could spend it celebrating the feel-good themes of ancient Egypt? Leave the goofy green clothing at Spencer's Gifts where it belongs and head down to the Firebird to check out Nile's 20th anniversary tour. Sure, seven full length death metal albums about mummification can get a little redundant, but it's still more interesting than seeing how many household tools Cannibal Corpse can think up smashing one's face with. Plus, Karl Sanders and crew's chops are still top notch and they're one of the most furious death metal bands touring today.

Fister CD Release with Bastard and Thorlock March 29th at the Firebird 8:30 pm / $7 Douglas Wildes Fister was born in Merced, California on February 4, 1984 and bats left-handed but throws with his right. He is some baseball guy, and not what this three piece doom band's name is a reference to. This is wrong part of the internet to learn about what it is in fact referencing, but let's just say the aforementioned is an act that's similar to what this band wants to do to your ears. This show marks the release of Fister's second full length, Gemini, an album which completes the band's growth from humorous stoner rock jams to deadly serious doom epics. If metal had an evolutionary chart, Fister would now be the modern man, walking fully upright and carrying a drop-tuned guitar in each hand.

Also on the bill are the always excellent ((Thorlock)) from Cape Girardeau, and one of St. Louis' best new metal bands, Bastard. Bastard features four of the five members of long-running local favorites, Harkonin, but with a new sound that infuses the drunken rock n' roll fury of Motorhead with their previous black/death metal hatred. It's the kind of music that would go really well with police chase videos, or anything where a guy is fighting cops with a flamethrower.