Hey You, Come Stare at These Freaks With Us

So apparently, there is a freak-show coming to town. And yes, there are legitimate freaks. PT Barnum and Ripley's Believe It Or Not beware, 999 Eyes is a genuine circus sideshow complete with a bed of nails, glass walkers, sword swallowers, human pincushions and more. 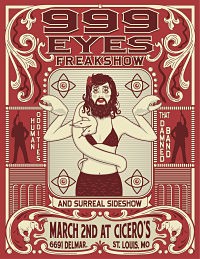 "I think of them as wonders of the world, not as freaks," says local promoter Tim Smith. " Everyone is a freak in some way or another." These are not Tod Browning's Freaks, but individuals celebrating their genetic diversities. 999 Eyes seeks to display the notion that abnormality is to be celebrated not abominated.

After decorating the space with original hand-painted banners, the 999 Eyes extravaganza transforms any room into an authentic vaudeville circus. A rotating cast of sideshow performances entice the human imagination while That Damned Band plays casbah and gypsy music. The night of freaky proportions takes place at Cicero's on Saturday, March 2. The show starts at 8 p.m. and tickets are $10.

The show's design branches through pure entertainment into the educational realm. "Through the theme of time travel, 999 Eyes give you the back-story to circus sideshows," says Smith. "So not only do you get a sideshow performance, but you also get its history."

Opening the show is award-winning Burlesque dancer GoGo McGregor, who tantalizes with her famous feather fan routine. Elegant dance isn't all she employs to keep you in your seats. GoGo will amaze you with her death defying bed of nails.

999 Eyes is no amateur circus: The show has been showcased on National Geographic's Taboo and WE TV's The Secret Lives of Women.

Busy Saturday? No need to fear if you can't make it out this weekend; March is extra freaky in St. Louis this year. You can get your freak show fix later this month at the Cut Throat Freak Show March 30 at Mushmaus.