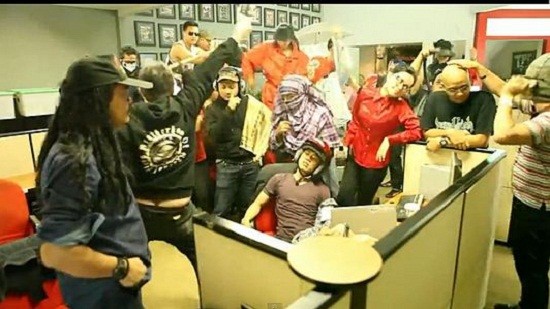 In recent music news, Radiohead will begin working on a new record in September. Nine Inch Nails is reforming. Pearl Jam is releasing another undoubtedly awful new record. And somehow, Iggy and the Stooges are gearing up for a new release.

But more importantly, the Harlem Shake is a thing.

Perhaps you are reading this article because you are like me and can tell you are getting old by the amount of everything you ignore now. I scroll through Facebook and systematically decide I don't give a shit about nearly everything. As I troll for interesting news on jellyfish or revolutionary new energy sources, eventually, someone that I like caves in and reposts some inane garbage -- and that's how I learn about things like The Harlem Shake.

Without consulting the Wikipedia page I have open behind this word processing document, I can tell you that the Harlem Shake is a dance. It is a dance that comes from Harlem. Also, it is a dance connected to a song where a woman with an accent says some words, then a bunch of people appear. Some of these people are wearing chicken suits. Some of them are laundry machines with bricks in them.

While the subject matter varies slightly, there is one certainty in the issue: No one should really care about this.

The last Harlem Shake this appliance will ever do.

We have plenty of great viral videos at the moment, involving underground heroes like Sexy Sax Man, Sweet Brown and the burnout hitchhiker who saved people from a homicidal rapist truck driver. There's even classic and countless videos out there of people falling and smashing their faces open - or better yet, staging a fall and smashing gallons of milk open. These are timeless, precious, loveable, memorable things.

Remember this? No? Exactly.

But the Harlem Shake? I've seen nothing (aside from that washing machine getting wrecked) to indicate this is something worth taking your time out for. On top of that, it's making the people of Harlem very sad.

In summary, please view "The Ketchup Song" and let it remind you how wonderful it is when everyone bands together and collectively forgets something. If that doesn't do it for you, there should be a link to the Macarena on the side there somewhere.