Out Every Night: The Best Shows in St. Louis from February 25 to March 3 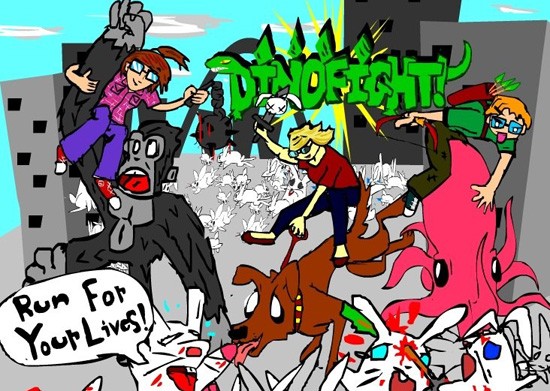 St. Louis is nothing if not prolific in 2013. Last week's show announcements boasted an impressive seven releases-to-be across the board. This week, add three more sets of brand new local tracks to your music collection. DinoFight!, Les Gruff and the Billy Goat, and Mikey Wehling and the Reverbs all have brand new audio wares to share. See where they're playing and dig into our other recommendations for the week, including stop-ins from Passion Pit, Globsters and The Pomegranates.

Catholic Guilt Monday, Feb. 25, 9 p.m. w/ Bitchin Bajas, Andy Ortmann, Kevin Harris, Brain Transplant @ Blank Space - $5 By RFT Staff Since early 2007, south-side demolition quartet Catholic Guilt has been in an endless battle against the sound barrier. Over the years, its lineup and style has undergone drastic changes. With early shows conjuring up thoughts of everything from Crass to Swans to Double Leopards, the band's focus has always been an exercise in sonic warfare. Now in its most realized form to date, Catholic Guilt's sound wavers between strident toxic sludge and black-hole dirge.

Passion Pit Tuesday, Feb. 26, 7:30 p.m. w/ Matt & Kim @ Peabody Opera House - $22-$32 By Diana Benanti From a 2010 Passion Pit show review: Passion Pit had an MDMA-like effect on the crowd, and it delivered every song with a maximal raw energy that was surprising, even for such a deliriously happy band. The band opened with the fantastic "I've Got Your Number," from 2008's Chunk of Change. Angelakos' crystalline falsetto was so impossibly consistent during the 75-minute set, it drew disbelieving comments from the crowd. (Overheard from one incredulous attendee: "He's talented to a point, but there's no way he sings that high naturally if he has balls." We were all thinking it.)

Pat Sajak Assassins Wednesday, Feb. 27, 9 p.m. w/ Forteana, Shut In, Beauty Pageant @ Blank Space - $5 By Mabel Suen Inspired by artists such as Tortoise, Battles and King Crimson, Pat Sajak Assassins has performed its prog-infused ripping experimental rock in this city for several years with a revolving door of talent to supplement its otherworldly synth sounds. PSA's latest addition is songstress Syrhea Conaway, named one of RFT's artists to watch out for in 2013. And watch, we will, to see what greatness inevitably results as these seasoned instrumental forces collide.

Langen Neubacher and the Defeated County Friday, Mar. 1, 8 p.m. w/ Les Gruff and the Billy Goat (CD Release), Ben Sturdevant, Le' Ponds @ Plush - $8/$10 By Kiernan Maletsky Langen Neubacher's songs, through their subject matter and delivery, feel something like a hug from a friend. Until recently, she co-hosted one of the city's best open-mics at Foam, and her generosity of spirit served her as well there, making all calibers of musician feel welcome, as it does in her own work. These days she's playing with Kate Peterson (also of the Spot Ons) under the moniker Langen Neubacher & the Defeated County. But it isn't all warm and fuzzy. Neubacher is keenly aware of the crappy hands dealt to so many, and her lyrics capture simple, honest moments in the struggle.

Demon Lover Friday, Mar. 1, 9 p.m. w/ Acid Baby Jesus, Hellshovel, Little Big Bangs @ The Heavy Anchor - $5 By Jaime Lees St. Louis has a lot of dudes in bands. Dudes in bands are plentiful. Demon Lover is distinctive because it is populated not just by dudes but by true musicians. Andy Lashier, JJ Hamon and Sam Meyer are all diverse multi-instrumentalists, and the Demon Lover boys make music that is as memorable as it is transcendent. Though the three men are essentially a rock band, the sound they brew is massive and alluring. The music is jazzy but not chaotic. It's trippy but not psychedelic. It's experimental but not tedious. Demon Lover is powerful and jubilant and reflects the weird hybrid sound of the new south-city scene -- a mutt mixture of rock, twang, beats and noise.

Mikey Wehling and the Reverbs EP Release Saturday, Mar. 2, 8 p.m. w/ Adult Fur, CaveofswordS @ The Demo - $7/$10 By Kiernan Maletsky One of the more obvious commendations for an artist using electronics is to note the humanity of her knob twists and button pressings. Few deserve the compliment as much as Mikey Wehling, a key member of Messy Jiverson in a past life and someone with a deep affection for grooves. His prolific solo output shows his commitment to analog, and the translation to full band isn't much of a stretch. The songs, in turn, are evolving from lush and patient moods to danceable jams.

King Kong Magnetics Saturday, Mar. 2, 9 p.m. w/ Globsters, Black Panties @ mushmaus - $5 By Diana Benanti From a 2011 interview with King Kong Magnetics: St. Louis's most awesomely objectionable hip hop collective, King Kong Magnetics, dropped a serious mixtape entitled Bommarito Cash Orgy. They deal with current issues like foreclosure ("You broke ass, you white trash, good for nothing with your f***ing torn up shirt, your overall stinkin' shit,"), buying American, and even devoted a track to the late Osama bin Laden ("We killed that little bitch in his homo-ass cave"), and it's fourteen tracks of wildly offensive satire that will have you laughing hard enough to shoot soy milk from your nostrils. Assuming you're drinking soy milk, otherwise you need a doctor.

Healing Powers (formerly known as Pomegranates) Sunday, Mar. 3, 8 p.m. w/ Bluefish, Since 1902, Men Working in Trees @ The Firebird - $10-$12 By Ryan Wasoba After seven years of releasing underrated albums on reputable labels and flying just below the radar of the average indie rock consumer, Pomegranates is no more. Fear not, for the Cincinnati group is not dead but reborn as Healing Power. The name change is sudden but not illogical, as the band has evolved from a loose lo-fi bedroom pop project to a tightly knit unit thanks to its time touring in the independent trenches. If Pomegranates' 2012 album Heaven is an indication of Healing Powers' future, expect floaty feelgood speed-pop that resembles an overly-caffeinated New Order.