Masked Intruder Steals Everything From the Parking Lot Around Cicero's: Review and Photos

If anyone reading this happened to get their home broken into or any of their belongings stolen last night -- especially in the Delmar Loop area -- please contact me. I may have an idea of who was responsible.

Madison, Wisconsin's favorite band of law-breaking pop-punkers played Cicero's last night, encouraging attendees to be careless with their valuables and to wander freely into dark alleys after the show. Officer Bradford, the band's touring parole officer, made sure the band members were following the conditions of their supervised release while a crowd of a hundred or so pogo-ed, slammed and sang along.

FAIR WARNING: I am not a photographer, but I took a bunch of pictures anyway.

See also: -The 15 Most Ridiculous Band Promo Photos Ever -The Top Ten Ways to Piss Off Your Bartender 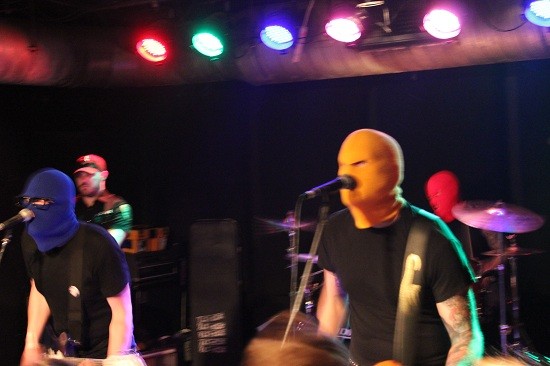 The band took the stage close to 11 p.m. following opening sets by Eaten Back to Life, the Perdition, the Fuck off & Dies and the Humanoids. Masked Intruder and the 'Noids actually did two days together -- this show and one the night before in Normal, Illinois, and a more perfect pairing would be difficult to find.

"Let's hear it for the Humanoids," said lead singer Blue (the band members only identify or refer to themselves by the color of their ski masks). "That's my favorite band. They got a lot of expensive stuff, too." Throughout the night Blue would consistently speak in a criminal-sounding faux-Brooklyn accent, making innumerable references to the crimes the band intended on committing as soon as the show was over.

"It's good to see all of you out here tonight," said Blue. "Hopefully we see you later, in a dark alley or something. Bring your valuables." The band's shtick might get tired if it wasn't executed so perfectly -- or if the music wasn't so damned catchy.

Ramones-y four-chord chops and energetic sing-a-longs abounded throughout the night. The hook for "ADT Security" might be one of the catchiest things I've ever heard, and the band played it precisely despite the fact they had to be nearing heatstroke with those ski masks on. I was hot as hell wearing a light sweater. "This song is about how we love you so much, your security system can't keep us away from you."

When the band announced they would be playing its last song, Officer Bradford (who had been largely unimpressed throughout the night, offering an emphatic "thumbs down" when Blue asked how they sounded) suddenly stepped to the front of the stage and ripped off his uniform, stagediving into the crowd.

After a lively "Masked Intruder" chant demanding an encore, the band members took back to the stage, saying "Okay, we're going to play a brand new song that no one has ever heard before. Is that alright?" A woman in the audience apparently indicated that it was not. "That's not alright?" Blue inquired. "What do you want to hear?" The woman replied that she wanted to hear "Heart -Shaped Guitar," which features female vocals. "Yellow, you want to do the girl part?" Blue asked of his band mate. Yellow did not want to, and the female fan who requested it didn't know the lyrics.

Enter Nichole Torpea, whom this reviewer knows as the lovely lady friend of Humanoids guitarist Greg Stinson -- she accompanied the two bands on their two days together. Nichole sang with energy and enthusiasm, but what was really amusing was Greg, who started jumping up and down as soon as she took the stage and eventually crowd-surfed, singing along. It was heart-warming.