Out Every Night: The Best Shows in St. Louis from February 11 to 17 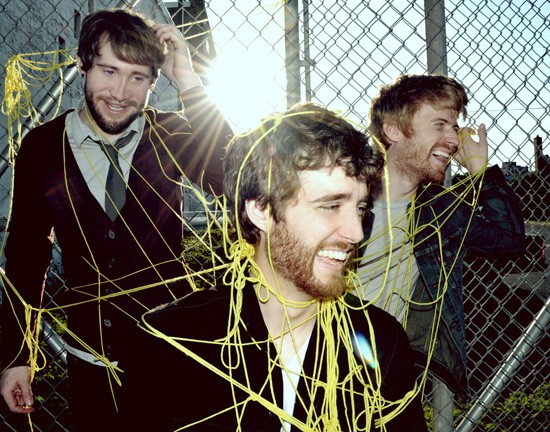 Perhaps one of the greatest joys of this here job is seeing what bands come up with for press photos. They range from strange and deranged to just plain silly (as shown above in string form). In case you missed it last year, my predecessor and now music editor Daniel Hill compiled a list of the 15 most ridiculous band promo photos. Be on the lookout sometime this year for an updated list from him. Until then, click through to see some mighty fine promo photos of this week's show recommendation stars, including the LA garage-blues band Vintage Trouble and violin-slinging Kishi Bashi among lively locals like Funky Butt Brass Band.

Night Beds Mon., 9 p.m., February 11 w/ Cassie Morgan and The Lonesome Pine @ Off Broadway - $10 By Christian Schaeffer Maybe it's fitting that Winston Yellen sounds like the name of a Flannery O'Connor character - there's a mix of faith and fury in the songs he creates under the moniker Night Beds. Yellen is a Colorado native who transplanted himself to Nashville, but the "country" on his debut Country Sleep is many miles away from Music Row. His music is more suited for the violet hour - songs like "Even If We Try" are sleepy and perfectly reverberant, while lead single "Ramona" has more punch in its grooves while still leaving room for Yellen's clear and transparently expressive voice.

Funky Butt Brass Band Tues., 8 p.m., February 12 w/ Gumbohead @ Broadway Oyster Bar - $6 By Calvin Cox While firmly rooted in the tradition of the New Orleans brass band, FBBB often adds elements of funk, soul and Southern rock during their playful and spirited sets. The infectious bellowing of the horn section and the sousaphone's booming bass-line provide the band's orthodox brass/jazz foundation, while the rhythm guitar and drum kit allow for more flexibility on their less conventional tracks. The end result is upbeat, feel-good music accessible by all.

Scarlet Tanager Wed., 9 p.m., February 13 w/ Cartwheel, All the Sad Young Men @ The Heavy Anchor - $5 By Christian Schaeffer From a 2011 album review: At first blush, it's easy to dismiss Scarlet Tanager as harmless, sexless twee-pop, and on a few cursory listens to the album, that's mostly all you'll hear. Songs of young love and bike rides mix with coloring-books metaphors and nursery rhyme snippets. Certainly, the ra-ra catchiness of a song like "Bum Bum Bum" begins to wear off, despite some slinky guitar lines and the obvious enthusiasm the band brings to nearly every track. But it's more accurate to say that Scarlet Tanager uses the shared language of childhood -- long summers, skinned knees, secret hideaways -- to make sense of the hormonal tidal waves and emotional bruises that come with growing up. With low drums, barbed guitar strokes and smoky delivery, "Baby Bunting" is, despite its title, the furthest thing from a lullaby; it sounds positively adult next to the shared hymns and sing-alongs on the rest of American Songbird. Similarly, the Mellotron flutes and gentles strums of "No One Likes a Quitter" shows that the sun must set on every summer. Songs like these serve as a reminder that inside every dead-eyed puppet, there's a human hand doing the real work.

Jukebox the Ghost Fri., 8 p.m., February 15 w/ Matt Pond, The Lighthouse and The Whaler, We Should Leave This Tree @ The Firebird - $13/$15 By Christian Schaeffer Look out for a pop triple-threat this week at the Firebird. Jukebox the Ghost continues to move out of the indie minor leagues with its increasingly radio-friendly and hook-savvy songs. Ben Thornewill's falsetto and big, broad strokes on the piano makes the band a less glitter-bomb-ready version of fun. Matt Pond has recently dropped the "PA" from the end of his name, which doubled as his fine band for much of the past twelve-plus years, but his soaring, burnished tenor lost none of its weight. Rounding out the triple bill is Lighthouse and the Whaler, a Cleveland-based band that's well-versed in keyboard-centered pop-rock that drives headlong towards an emotional core.

Vintage Trouble Fri., 9 p.m., February 15 w/ The Soul Selector Tom "Papa" Ray @ The Demo - $15/$18 By Roy Kasten It should shock exactly no one that LA garage-blues band Vintage Trouble did not live up to its live notices - especially a notorious Jools Holland-obliterating set in April 2011 - when it released The Bomb Shelter Sessions, a sweaty but ultimately restrained 2012 document of these four ferociously sleazy, mean, gyrating motherfuckers. So take heed: When the rhythm section locks down a trashy soul raver like "Pelvis Pusher," it kills. When guitarist Nalle Colt takes a lead, he slides and scrapes like Junior Kimbrough. And when singer Ty Taylor grabs a microphone stand, he melts the chrome before your eyes and ears.

Bob Reuter's Alley Ghost Sat., 8:30 p.m., February 16 w/ Luella and the Sun, Melody Den @ Off Broadway - $5/$8 By Josh Levi Bob Reuter is a living legend. With a music career that spans nearly five decades, he's found a renewal of rock & roll energy in Bob Reuter's Alley Ghost. He writes unapologetic songs incorporating folk and garage rock, defined by an unmatched grit and fire in the belly. His creative endeavors run the gamut: radio DJ, photographer, writer, storyteller and, most of all, rock & roller.

Kishi Bashi Sat., 8:30 p.m., February 16 w/ Plume Giant, Ross Christopher @ The Firebird - $12/$14 By Ryan Wasoba When Of Montreal played in St. Louis in 2011, touring violinist K Ishibashi (stage name Kishi Bashi) performed a last-minute opening set of songs built from layers of violin loops. He was clearly a talented gentleman, bursting with the creative energy he had stored up playing sideman. His solo act has since blossomed on the strength of last year's 151a, a record of funhouse-folk in the vein of The Dodos and early Animal Collective. In the violin-looping songwriter scene, Kishi Bashi may not pose a threat to Andrew Bird, but Owen Pallett had better watch his back.

The Humanoids Sun., 7:45 p.m., February 17 w/ Masked Intruder, The Fucks Off and Dies, Eaten Back to Life @ Cicero's - $10 By Michael Dauphin From 2011: It's a shame: How many good albums fall victim to the cycle before they are ever born? Fortunately, there's the Humanoids. Its five members have all been in dozens of bands before. They have spent too many nights at crappy diners and squatter punk houses, and they know how to appreciate a little balance in life. If that means clocking forty-plus hours at a commercial insurance agency and saving your vacation to go on a weeklong support tour opening for some of today's most notable American punk bands, so be it. Too many bands become so entrenched in what's "expected" of them that they wind up doing the very thing they were trying to avoid in the first place: playing by the Rules.